The two first-prize winners of the Tokyo Foundation Japanese Essay Competition arrived in Japan and the was held in Tokyo on January 25. Present at the were the guests of honor representing the two countries of the winners, H.E. Mr. Alistair Murray McLean OAM, The Australian Ambassador to Japan, and H.E. Mr. Ian Kennedy, The New Zealand Ambassador to Japan, and other distinguished guests involved with Japanese language education.

Tokyo Foundation Chairman Hideki Kato presented the winners with certificates of merit, marking the official start of their one-week invitational stay in Japan—the first prize . By visiting various places in Japan, coming in direct contact with Japanese culture and tradition, and interacting with many Japanese people, the two winners will surely deepen their understanding of Japan.
The following are summaries of speeches presented at the by the participants on the significance of studying Japanese.

Samantha Vickery
Third-year student, The University of Auckland (New Zealand)
I started to study Japanese because of the death of a childhood friend who was Japanese. I realized that to truly understand her, I would have to understand her culture. I can no longer ask her any questions, but I feel that by studying Japanese I may be able to gain a deeper understanding of her background and beliefs.

Many foreigners have a simplified image of Japanese society and culture, but through my study of the Japanese language, I have been able to understand a lot about Japan. I feel that this has enhanced my ability to communicate successfully with people who come from different cultures.

This kind of communication ability becomes even more important in this complicated era of multiculturalism. I hope to make full use of this and contribute to sustaining good business relations between New Zealand and Japan. 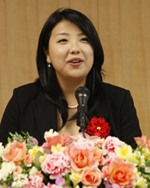 Rebecca Chen
Fourth-year student, Monash University (Australia)
When I was in my first year at middle school, I had to choose between studying Italian, Japanese, or Greek. European languages were popular at my school, but I followed my father’s advice to study Japanese because he anticipated the further development of relations between Japan and Australia. I was 13 years old at that time and only thought of studying Japanese as a way to make watching Japanese anime more enjoyable.

I am now studying Chinese, Japanese, and business at school, and after graduating, I hope to work at a Japanese firm in Australia or something related to the Department of Foreign Affairs.

Learning the language of a country is also about learning various elements of that country such as its people, customs, culture, history, and society. My dream is not just to become proficient in Japanese and find a job where this language ability can be appreciated, but to also become a bridge between Australia and Japan. I believe that this experience is one step in this direction.

H.E. Mr. Alistair Murray McLean OAM, The Australian Ambassador to Japan
It takes a lot of effort and commitment to study foreign languages, and that is particularly the case if it’s an Asian language that has a completely different alphabet. Forty years ago, I studied Chinese and I had difficulty as well. But I’m glad that I can read the road signs and understand the newspaper headlines here in Japan. I think it’s very important to give a message to skeptical young students in their countries that it’s not just about difficulty in learning a language but learning about foreign cultures and traditions of the country.

H.E. Mr. Ian Kennedy, The New Zealand Ambassador to Japan
The relations between New Zealand and Japan cover a broad range of areas including economy and security. Personal exchanges are also important, and for friendship to be cultivated through such interaction, it would be essential to use words to speak with each other. I am happy that young people are studying Japanese and have dreams of working to bridge our two countries. I hope you will fully use this opportunity to speak to many Japanese, deepen your knowledge of Japan, and make large contributions after your return.

Chairman of the Tokyo Foundation

Globalization has been sweeping the world over the past 15 years. Within a given country, be it Japan or Australia or New Zealand, globalization tends to create diversity. But at the global level, it’s leading rapidly to uniformity and homogeneity. From a long-range perspective, it seems to me that this trend is fraught with danger. A homogeneous structure is a fragile structure. That’s why diversity is so important. In a world where English reigns as the universal language, anyone who chooses to study Japanese—a minority language that’s about as different from English as a language can be—is contributing to the cause of diversity. So, while your efforts to master Japanese are naturally very gratifying to the Japanese, I would also suggest, at the risk of sounding a bit pompous, that those efforts have real global importance as well. With this in mind, I want to wish you all the best in your study of Japanese henceforth and encourage you to give it your very best.

At the Tokyo Foundation we are trying to do what we can to help build a better world through our two missions of "developing policy" and "investing in people." I am convinced that diversity is critical to solving a host of global problems, from the 2008 financial crisis that’s generally blamed for the current global recession to more fundamental underlying problems, such as government finances. To understand these things, it’s vital to gain a grasp of diversity and communication. Take the world of finance. Finance might seem to function very mechanically, but the truth is that it’s profoundly influenced by culture. Language is your key to this sort of understanding. Attain this kind of understanding, become familiar and comfortable with diversity, and I’m confident you’ll have what it takes to succeed in the field of your choice and make a critical and valued contribution to society.

The Japanese language is rich in poetic expressions relating to nature and the seasons. For example, yama nemuru —“the mountains sleep”—describes the mountains in winter, when the trees are bare and the ground is covered in snow. Yama warau , “the mountains laugh,” evokes the spring, when pale green and yellow and pink buds are bursting from the trees. In the summer it's yama shitataru , “the mountains drip,” and in autumn, yama yosou , “the mountains dress up.” These days even native Japanese speakers tend to be unfamiliar with such expressions. So all they can see when they look at a mountain is "the trees have no leaves," or "the leaves are coming out." But when you’re familiar with this other vocabulary, it enriches your emotional capacity and your sensibilities. It seems to me that that’s very important.

So, while I want you both to enjoy yourself to the full in the coming week, as a much- deserved reward for your achievement, I also hope you'll approach this trip as a learning opportunity and greedily absorb all you can of Japan’s rich language and culture.