Daikon, or Japanese radish, is one of the most representative vegetables of Japan. Originally from the Mediterranean and Black Sea coasts, it found a home in Japan over 1,300 years ago. More than 100 local varieties were born, but most are on the verge of extinction, having been largely replaced by a single variety.

Daikon, 90 percent of which is both produced and consumed in Japan, became popular nationwide in the Edo period (1603-1868). Travelers and merchants introduced superior varieties to other parts of the country, and the system of sankin kotai , whereby feudal lords spent alternating years in the capital and their respective domains, also helped spread the vegetable. As local varieties suited to their native climate and tastes were developed, daikon became essential to the Japanese diet. Large quantities were cultivated in the vast farmlands around Edo (now Tokyo) using compost made from the excreta of not only livestock but also the people of Edo, already one of the world's largest cities. It was the daikon that saved the people time and again from famine, and the Edoites made various dishes from this life-saving vegetable.

The most famous of the daikons of Edo is the Nerima daikon. High in fiber, it is perfect for making takuan pickles. The crispy takuan made with Nerima daikon was a favorite of the Edoites and helped artisans and laborers supplement the salt that they had sweat away.

The Kameido daikon, first cultivated in the Kameido area during the Bunkyu era (1861-64), is another famous daikon of Edo. It was favored by Edoites as an early spring vegetable for its dense flesh and the suitability of both root and leaves for pickling.

The Miura Peninsula in Kanagawa Prefecture has also been a center of Japanese radish production for ages, as evidenced by documents dating as far back as 1841. The Miura daikon, which would later become a big name in the vegetable world, is a natural hybrid between the Nerima daikon and locally grown varieties, such as the Koenbo and Nakabukura.

The Nerima, Kameido, and Miura daikons were all popularly cultivated until the middle or latter half of the Showa era (1926-1989) and formed the cornerstones of a rich food culture. But their production would soon plummet. Diseases and natural disasters, the urbanization of former farmland, the hassle of harvesting, changes in consumer diets, and the expansion of nuclear families all undermined the production of these local varieties.

In their place, the aokubi daikon came to dominate the market for Japanese radishes. The aokubi daikon is an F1 hybrid, a plant produced by cross-pollinating two pure lines to yield consistent traits. It is resistant to disease and exposes a good part of its root above ground, making it easy to harvest. It fattens quickly into a uniform shape. The flesh is sweet, moderately fibrous, and tender. In short, the aokubi daikon combined all the qualities needed in a modern Japanese radish, being perfect for volume production and having just the right size and shape for distribution on top of excelling in taste.

Today, the new hybrid accounts for about 90 percent of all daikon produced in Japan. Local varieties, which once numbered more than 100, are rarely to be seen nowadays.

But there is a glimmer of hope for the Nerima, Kameido, and Miura daikons, as local wards, agricultural cooperatives, and farmers are engaging in their cultivation. In the following section, we will look at the history of each variety and current efforts by producers for its preservation.

Legend has it that the Nerima daikon originated from the seeds that Tokugawa Tsunayoshi, the fifth Tokugawa shogun, ordered from Owari to the capital for cultivation. But its shape and characteristics would seem to suggest that it is the outcome of generations of complex natural crossbreeding between a preexistent local variety of Nerima and the variety brought from Owari, until a radish with favorable qualities was born.

Several factors played in its favor, leading to its active cultivation. The soil in Nerima is part of the Kanto loam layer, consisting of volcanic ashes from Mt. Fuji and ideal for daikon cultivation. The radish had superior qualities as a takuan pickling vegetable. Moreover, it became the designated daikon for payment in kind to the Tokugawa shogunate. Production volumes increased in the Meiji era (1868-1912), as large quantities of takuan made from Nerima daikon were supplied to the army during the Sino-Japanese and Russo-Japanese wars (1894-95 and 1904-1905) as garnish for the rice balls eaten by soldiers. Consumption further grew between the Taisho era (1912-1926) and the beginning of the Showa era, and up to 500,000 Nerima daikon were annually produced in the peak years. From around the mid-1950s, however, the tide reversed.

In 1989 a program was jointly started by the Nerima Ward, farmers, and agricultural cooperatives to save the Nerima daikon from extinction. Today, as in the old days, most of the harvested radishes are pickled. The Nerima daikon is sown between late August and early September and harvested between late November and early December. Prior to pickling, the daikon is sun dried for 10 to 14 days in the cold, depending on the weather, after having the soil washed away and its skin scraped off with shark skin or a similar tool to facilitate drying. Once thoroughly dehydrated, the daikon is taken to picklers and becomes takuan .

Furthermore, some farmers are individually engaging in unique efforts. Yoshitaka Shiraishi, in addition to growing Nerima daikon under commission from the ward, is also trying to reproduce the original Nerima daikon; the currently known Nerima daikon is actually a hybrid developed by a seed and nursery company. Shiraishi hopes to open the door to the past and bring back to life the true, original form of the Nerima daikon.

The Kameido daikon, despite its name, is not to be found anywhere in Kameido. Initially grown as the local radish of the Kameido area during the Bunkyu era, its production was moved out of town more than a century ago. Its pale color and small, carrot-like shape earned it such endearing names as okame daikon and otafuku daikon, both of which refer to a traditional mask of a white-faced woman having a prominent forehead, puffed cheeks, and a small nose. Sown in the fall and harvested in early spring, it quickly came to be widely cultivated as a precious winter vegetable. But with the wave of urbanization set off by the opening of a local train station in 1904, farmlands soon disappeared from Kameido.

The Kameido daikon found a new home in Takasago, Katsushika Ward, eight kilometers to the northwest. Today, Toichi Suzuki is the only producer who grows it on a significant scale. Every generation is grown from harvested seeds; about 1 in 100 radishes are chosen at harvest time and replanted. Suzuki takes extreme care with the radishes selected for seed harvesting, such as by netting them to prevent pollination by butterflies. This is to ensure the replication of tender white stalks, the result of a mutation that occurred in the century since production was moved to Takasago. Crossbreeding with other cruciferous plants will likely make the stalks revert to green.

The Kameido daikon is harvested about 100 days after seeding in the fall and comes in season between around the vernal equinox and April. Unlike the aokubi daikon, which is harvested in the fall, this variety needs to be overwintered. Kameido daikon grown in a greenhouse does not taste good, according to Suzuki, and so he adheres to a traditional method that uses reed screens for temperature control.

"Although the Kameido daikon is small, it takes strength to pull it out of the ground, because the top of the root isn't exposed like that of the aokubi daikon," explains Suzuki. "I've got to handle the leaves with care, since they're also part of the product, and there's the washing and bundling to do, too. It's time-consuming and unprofitable work, but I do it in the hope of preserving the Kameido daikon."

Suzuki currently produces about 20,000 of these radishes annually. He does what he can to spread the vegetable to younger generations, such as by helping with daikon-growing experiences at elementary schools and giving away seeds upon request.

The Miura daikon was long grown in the Miura Peninsula before officially receiving its current name in 1925. The industry suffered a fatal blow in 1979, when a typhoon brought with it strong saline winds that blackened and melted the leaves overnight. Farms incurred losses that are said to have totaled 800 million yen, the worst in the history of Miura daikon production. To ride out the crisis, the farms planted aokubi daikon. The emergency measure was surprisingly successful-so much so that within two years after the typhoon the Miura daikon, which had been grown by local farmers for over 100 years, was almost entirely replaced by the aokubi daikon.

Still, there are some farmers, few though they may be, that remain loyal to the Miura daikon. Kazuko Yoshida is one such person. "Of the thousand or so farms in all of Miura, I think forty or fifty grow the Miura daikon," she estimates. Only 1 percent of the Japanese radishes produced in the region are of the local variety. The space-hogging leaves make it an inefficient crop, and harvesting is hard work, as it is a large and heavy vegetable. The root grows to 50 or 60 centimeters, with a diameter of 12 to 15 centimeters, and weighs as much as 3 to 4 kilograms. I tried pulling one out, but I learned that it takes skill and considerable time, unlike the aokubi variety.

Yoshida is a spokesperson of sorts for the Miura daikon, giving lectures and workshops to promote its consumption. As a producer, she is not all about "growing"; her gaze extends beyond to the act of "eating" that awaits the daikon that she sends into the outside world.

The most notable feature of the Miura daikon is its dense flesh. In addition to a dish called namasu (marinated julienne strips), it is often favored for simmered dishes, as it stays firm even when stewed. The radish is best eaten between early December and around February. It is shipped to market only during three days, from December 24 to 26, but it can be found at every farm stand around this time, and people come all the way from Yokohama and Tokyo to buy the daikon.

The aokubi daikon may reign supreme, but local varieties of daikon that have been cultivated for ages thanks to their compatibility with their native climate should not be allowed to pass into memory. It is with such a desire that diverse daikon are being kept alive by the hands of locals. 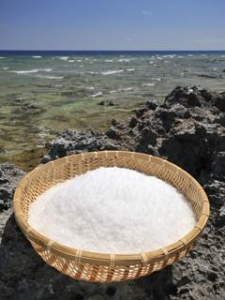