Salt has been manufactured from seawater across Japan since prehistoric times. But with a 90-year monopoly on salt and the disappearance of salt fields, the only choice for Japanese consumers in recent decades had been salt produced by an ion exchange process. Following abolition of the monopoly in 1997, a wide choice of salts is becoming available.

Disappearance and Revival of Natural Salt

Salt is indispensable for human survival, just like air and water. Its importance has been known to humanity since ancient times, as evidenced by the "salt roads" remaining across the world, including Japan, which were used to transport salt inland from coastal areas. Seawater is not the only source of salt; in other parts of the world, edible salt is also derived from rock deposits and from saline lakes. But in Japan, due to the lack of these sources and its being surrounded on all sides by ocean, its people found ways to extract salt from seawater and refined them over the centuries.

A major turning point in the history of salt in Japan was the establishment of a government-mandated monopoly on salt. The monopoly was put in place in 1905 to cope with the costs of the Russo-Japanese War, as well as to develop the domestic salt industry base. The production and sale of salt would be strictly regulated for much of the twentieth century.

In 1971, furthermore, the Act on Temporary Measures for the Modernization of the Salt Industry put an end to all salt fields. The coastal beaches that were once salt fields quickly turned into industrial sites, washed over by the waves of Japan's rapid economic growth. In this way, traditional methods of salt production were all but lost.

A new method known as ion exchange membrane electrodialysis took their place. Japan was the first country to provide salt produced by this method to its people. Electricity and ion-exchange membranes are used to extract and concentrate sodium ions and chloride ions from seawater, which are then boiled down into crystals in a vacuum evaporation system. Salt made in this way has very high purity, with more than 99 percent sodium chloride content, and is also cheap. It was advocated as safe salt that is free of marine pollutants and bacteria. For decades the only edible salt that the Japanese could come by was so-called table salt, virtually all sodium chloride and nothing else.

Doctors and scientists soon voiced their concern, noting that traditionally produced natural salt and salt produced by ion exchange greatly differ in their mineral content. More than just a seasoning, salt is a source of a variety of essential minerals, if in minute quantities. The mineral content of seawater and that of human bodily fluids, such as serum and amniotic fluid, are extremely close. But ion exchanged salt is refined by removing bittern, resulting in a higher concentration of sodium chloride than in natural salt and lower amounts of most other substances, including magnesium and calcium. Salt that greatly diverges in their mineral content from that of seawater could not be good for the human body, experts speculated.

This concern led to movements to revive natural salt. The first to move was the Investigation Group on Dietary Salt. Founded in 1972 and now a nonprofit organization called the Japan Research Group on Dietary Salt, it proposed producing salt by adding bittern to imported bay salt, a method that was possible within the restrictions posed by the monopoly. Adding bittern brings the mineral content closer to that of natural salt. Later, a small number of producers would be specially permitted to directly manufacture salt from seawater on a test basis. Production of natural salt was thus resumed, but only on a very limited scale.

The abolition of the salt monopoly in 1997 opened the door to a new age of choice. In 2502 the transitional measures accompanying the abolition also came to an end, and all controls on imported salt were lifted. Today over 700 companies in Japan manufacture salt, and the number of home-use and professional-use products add up to more than 1,500.

There are now many producers across Japan that manufacture natural, additive-free salt with well-balanced mineral content from domestic seawater by natural methods. In the next section, we look at two salts derived from the beautiful seawater of Okinawa: Aguni no Shio and Temomi Tenpien Enmusubi.

Aguni no Shio is an all-natural salt with a superior balance of minerals that is made from the clear water surrounding Aguni Island, Okinawa Prefecture, without using any chemicals. The Okinawa Sea Salt Research Institute produces the salt under the motto, "Life is from the ocean." Director Koshin Odo began making salt after meeting the late Katsuhiko Tani, a leader of the natural salt revival movement and a nuclear physicist. Following the eradication of salt fields in 1971, Tani and other scientists began studying salt in response to concerns about the health effects of salt produced by ion exchange. Okinawa remained immune from the salt monopoly due to its being under US control until 1972. But with its reversion to Japanese administration the local salt industry, which had thrived for over three centuries, would face near extinction.

Odo, who had studied about organic food and was well aware of the importance of salt from early on, has continued his research on salt since his encounter with Tani in Yomitanson, Okinawa Prefecture. "Salt serves three important functions," explains Odo. "One is to enhance flavor, another is to help absorb other nutrients, and the third is for excretion. It may be a backseat player, but there are no substitutes for it." The fruit of his pursuit of tasty, mineral-rich salt is Aguni no Shio.

This salt is made using a 10-meter-tall rectangular "vertical salt field tower" built with perforated blocks. Seawater is pumped up to the top of the tower and trickled down the finely branched bamboo stalks hanging inside. As this is repeated many times over the course of about a week, sea breeze blowing through the perforations gradually carries away the moisture, resulting in kansui , or strong salt water that has been condensed to six or seven times its original volume.

There are two different processes from here on, as there are two types of Aguni no Shio. The first type is made by flat-kettle boiling, whereby the kansui is slowly boiled down in a shallow vessel for about 30 hours. Driftwood and scrap wood are used for fuel; unlike gas, firewood generates far-infrared heat. The contents are stirred around the clock in shifts, not only to prevent burning but also to ensure that the minerals thoroughly blend in. Once the salt has crystallized it is transferred to a dehydration tank, where the excess moisture is slowly removed. This final step determines the quantity of minerals in the product. "Certain minerals, such as magnesium, tend to get lost when you use a centrifugal separator," Odo says. That is why, to retain the natural mineral balance, he dries the salt naturally without using machines. The process takes from 6 to 18 days.

The second product is sun-dried salt. The kansui is placed in a shallow tank within a glass-covered hothouse and allowed to crystallize solely by the action of sunlight. This process takes three weeks even in summer and can take more than two months in winter. It goes without saying that mass production is not possible. There are many fans of Aguni no Shio who prefer the latter, which has larger crystals than the former and tastes slight different.

Ken Matsumiya and his wife, Sayuri, produce salt that contains a rich blend of natural minerals from pure seawater. Temomi Tenpien Enmusubi is made by crystallizing kansui under the sunlight and working the salt by hand.

The Matsumiyas begin by gathering water from the crystal-clear ocean spreading before the salt fields. To ensure quality seawater, the water is filtered four times before storing in a tank. Scum is then removed, an important step in refining the flavor. Here, too, a "vertical salt field" is used to make kansui from the filtered seawater, this one being six meters tall. The structure comprises a framework made of Japanese cedar wood covered with water-repellent cloth, with many layers of black cloth crisscrossing its interior. The seawater falls down from above through the layers, allowing the wind and solar heat to slowly evaporate the moisture as the cycle is repeated day after day. During the summer, when there is no rain, it takes about 15 days to obtain kansui concentrated by about five or six times.

The kansui is taken to a crystallization house, which is built with hi-tech material made of fluorite that has been stretched out by a special process. Here the kansui is naturally dried in crystallization boxes by sunlight, but not without human intervention. It is kneaded by hand every day for anywhere from 28 days to one and a half months in the summer and for around two months in the winter.

The key factor that determines the flavor is when to harvest the salt. Magnesium chloride, which crystallizes last, gives it a crisp bitterness. If harvested early the salt will be plain briny, but if harvested late it will become too bitter, killing the characteristic tartness of potassium chloride.

Salt that is ready for harvest is worked through by hand especially carefully, coating it with a film of bittern in the process. It takes seven hours in all, in the morning and evening, at the end of which the hands are stiff and swollen. But using a processing machine deprives the salt crystals of their luster, and the heat of friction breaks down the iodine in the salt, the producers say.

Now smooth, the salt is put in hemp sacks, and excess bittern is wrung out in a dehydrator. After blending different lots together to even out the quality, the salt is dried in a drying room equipped with a dehumidifier until the moisture diminishes to less than 0.1%. Finally, the salt is sifted to visually check for any particles of dust.

Thanks to all the time and labor that go into its production, Enmusubi contains a rich medley of minerals that give it a subtle sweetness and rounded flavor.

Here in Okinawa, natural salt that had once disappeared from Japan has come back to life. Mineral-rich salt has a mellow and profound flavor on top of being good for our health. It is also reassuring to know that its producers make the salt with conviction and commitment.

Writes travel articles for various magazines, books and websites as a freelancer. Has visited many places in and outside Japan to explore their unique cultures, especially their food. 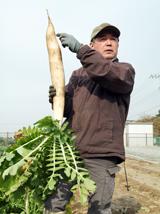