Eight-rowed corn sustained the lives of those who had newly settled Hokkaido in the late nineteenth onward. It has since been supplanted by sweet corn as fresh food, and corn in general is mostly imported today. But the vegetable continues to be produced on a small scale in an effort to keep the familiar taste from being lost for eternity.

The Portuguese are credited with first bringing corn to Japan in the sixteenth century. But it was not until the beginning of the Meiji era (1868-1912), when the Hokkaido Development Commission introduced American corn to Hokkaido, that corn came to be grown in Japan on any real scale. As this northern land was too cold for rice farming, its people cultivated and ate corn either as a staple food or as kate —cereal grains mixed in with the staple grain to make up for the shortage. Among the varieties that made its way into Hokkaido around this time, the Sapporo hachigyo and Longfellow, both of which are North American flint corns having eight rows of kernels, were particularly suited to the Hokkaido climate and soil. In 1905 these eight-rowed corns were given the official stamp of approval as "superior varieties."

Venders selling freshly grilled corn on the cob are a fixture of summer on Sapporo Odori avenue in Hokkaido. It appears to have all started in 1892 when a local by the name of Teru Shigenobu went out with a brazier to the Sapporo streets, where she grilled homegrown ears of corn and sold them to passersby. In 1908 the renowned poet Takuboku Ishikawa wrote a poem that went, "In the still and spacious town / Oh the aroma of corn / Grilling on an autumn night." What captivated the poet was the fragrant smell of grilled corn—eight-rowed corn, no less—wafting through the broad streets of downtown Sapporo. Eight-rowed corn was important not just as food, but also as a valuable crop that offered emotional support in the early years of modern Hokkaido development.

According to a book based on interviews about dietary life in Hokkaido around the 1920s and 1930s, practically every home in Hokkaido was filled with the smell of corn gruel cooking on a stove at lunchtime during the winter. Rice was eaten most sparingly in the eastern region of Tokachi, where temperatures are particularly low. As frequent cold spells rendered rice farming impossible, rice was something to be bought and not grown, and making the purchased rice last as long as possible was a big concern. The kate added to rice included naked barley, barley, and proso millet, as well as potato, pinto beans, red kidney beans, and, of course, corn. The corn used in this manner was eight-rowed corn. As a woman in her eighties fondly reminisced during an interview that I once did in Shikaoicho, Tokachi, corn harvested in the fall would be hung from the eaves to dry, then stone ground into powder and cooked with rice to make corn gruel.

Today grain corn, including the eight-rowed varieties, is no longer the staple food of Hokkaidoites. But it continues to play an important role as raw material for various foodstuffs, among other uses. Unfortunately, however, the volume of domestically produced corn is almost nil. According to figures released by the Ministry of Agriculture, Forestry, and Fisheries, Japan imports practically all of the corn it consumes, or over 16 million tons annually (roughly 3 percent of worldwide production and 25 percent of worldwide trade in corn), of which over 90 percent comes from the United States and the rest from Argentina and other countries. Two-thirds of these imports become livestock feed. Of the remaining one-third, about 70 percent is used as raw material for such ingredients as cornstarch, glucose, and mizuame (a thick sweetener similar to corn syrup), while 30 percent becomes fermentation feedstock for such products as distilled liquor and beer.

In the century and a half since the start of Hokkaido's development, domestic corn production has mostly ceased. Nonetheless, with changes in eating habits, corn has steadily made its way into Japanese food and life in different forms. But if corn is so essential, why is grain corn, including eight-rowed corn, hardly being produced?

There are several reasons. The first is that its optimum harvesting season is highly limited. Second, it ages quickly after harvest, making it unsuitable for shipping. Furthermore, it cannot be harvested all at once because the seeds do not germinate at the same time, which means that each ear of corn must be individually checked before picking.

Yet another reason is that, in the Showa era, consumer demand shifted to sweet corn, which has high sugar content and stays fresh longer. With the development of F1 hybrids of sweet corn, it has become possible to synchronize germination, adjust the timing of harvest, and extend the harvest season. And strains have been created that can withstand long-distance shipping. The production of sweet corn thus surged, and today it accounts for almost all of the corn sold fresh in Japan.

But while changes in dietary habits and the emergence of new varieties have had important effects on the fate of eight-rowed corn, there is one more point to consider: For the many full-time farmers in Hokkaido having nationwide clienteles, growing eight-rowed corn entirely goes counter to their interest in efficient, large-scale production.

In the light of the global food situation, grain corn cultivation appears to be a serious option for Japan. After all, Japan imports nearly 100 percent of the corn used as fodder in beef production, dairy farming, and the swine and poultry industries, as well as that used for making food ingredients and alcoholic beverages. If imports were to become unavailable for some reason, the effects would be incalculable. In fact, the prices of imported grain corn have steadily climbed in the past year or two and are unlikely to fall anytime in the near future, according to government statistics.

Grain corn actually has a number of advantages over sweet corn. It is more resistant to disease, its stalks are less likely to fall over, and it can adjust to diverse environments. Dent corn, a kind of grain corn alongside flint corn, is increasingly being grown in livestock farms to feed their animals. No simple nutritional or quantitative comparisons can be made with its imported counterpart, which consists only of the ripened kernels, whereas domestic dent corn is harvested while still unripe and its ears, stalks, and leaves are all fed to livestock. One thing that is certain, though, is that its internal production as fodder is expanding across Japan.

The Oikawa Farm in Mikasa-shi is one of the few farms that grow eight-rowed corn. While it mainly focuses on breeding Japanese Black beef cattle, of which there currently are 30, about 5.5 hectares out of its 80.0 hectares of land are devoted to growing Sapporo hachigyo corn. The seeds are harvested here as well. The Oikawa Farm is probably the only farm that cultivates Sapporo hachigyo as a commercial crop, particularly on such a substantial scale.

More than anything, Yoshiyuki Oikawa began growing the Sapporo hachigyo because both he and his wife had always loved the corn. But sentimental reasons aside, he also needed auxiliary income to keep his cattle breeding business going. The various risks involved in beef cattle husbandry, including the long breeding period and the possibility of delivery problems, call for a certain amount of working capital. From 1979 to 1987, Oikawa used to cut down trees in the mountains each winter and earn two million to three million yen, which he put into breeding and fattening his 100 cattle. But it was hard work, and, sensing that he would not be able to continue as his strength deteriorated with age, he decided to seek an alternate source of income. After years of contemplating how he would like to grow a crop that no one else could make, Oikawa began cultivating Sapporo hachigyo corn in the 1990s.

Oikawa single-handedly looks after the corn. This can be done because he never plants all 5.5 hectares at once; he divides the land into several plots and plants corn in each plot at different times. So although he spends extensive periods caring for the corn, the crop acreage at any given time is not very large.

Oikawa also has an impressive ecological cycle in place. He allows his cattle to graze in the cornfield after harvest, saving himself the trouble of cleaning up the leftover stems and leaves. Moreover, the cattle manure is mixed with straw and wood chips to produce compost, which Oikawa then generously sprinkles in the cornfield. In five years the compost will have fully blended with the earth, resulting in nutritious soil with no need for additional fertilizers.

Several years ago, the Hokkaido Slow Food Friends came to focus on the Oikawa Farm and the Sapporo hachigyo corn. Eight-rowed corn played an important part in Hokkaido's development and in attracting tourists to Hokkaido, and they were not about to let it go extinct. In January 2004 the daily Hokkaido Shimbun Press did a story on their activities, prompting more than 100 inquiries over the following week. Most of the inquirers wanted to know where to buy the seeds. Others said they would like to savor that familiar taste again before they die, or that their ailing parents were craving for Sapporo hachigyo corn. The strong response to the article proved just how deeply eight-rowed corn had been engraved in the minds of Hokkaido residents as an unforgettable taste.

Oikawa's efforts have also prompted others to grow eight-rowed corn. Several farmers have started cultivating the corn to preserve this historically important vegetable, as well as in the desire to enjoy its good old taste. Members of the Kamishibun Fureai no Sato in Iwamisawa-shi also produce eight-rowed corn, though in small quantities, and sell it at municipal events and elsewhere.

It is high time that Japan seriously considered domestic production of grain corn, not only to raise its self-sufficiency rate but also to enhance local vitality and food diversity. Moreover, before we resort to genetically modified corn, the safety of which remains under question, eight-rowed corn deserves reevaluation as a key crop that supported the life of Hokkaidoites for generations. 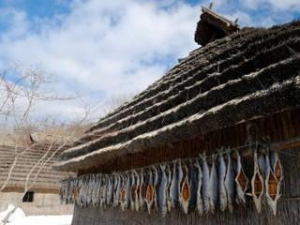