Dried bonito is a major source of the traditional soup stock that is essential to so many Japanese dishes. The choice variety is fermented and takes several months to make, and even ordinary, unfermented kinds take a month. This important seasoning is being driven from its position in everyday Japanese life by quick chemical alternatives.

Dashi, or soup stock, forms the backbone of Japanese cuisine. Various kinds of dashi are found in different parts of Japan, such as those made from kelp and shiitake mushrooms, those from dried baby sardines, and those from flying fish. But the most widely used kind is awasedashi, which is made by blending kelp and dried bonito, or skipjack tuna. From miso soup and soup noodles to tempura sauce and simmered dishes of all sorts, this dashi is used in a great many Japanese foods.

Dried bonito, called katsuobushi in Japanese, has a venerable history. It was not until around the middle of the Edo period (1603-1868) that production of fermented dried bonito, or honkarebushi, began. But the roots of honkarebushi lie in nikatauo, which was mentioned as a "[seasoning made from] fish that has been boiled and dried hard" in the Yoro Code, a set of criminal and administrative codes completed in 718.

Having developed from ancient times as a dried food, katsuobushi first came to be made by smoke drying in 1674. A well-known anecdote about the birth of this method tells of a fisherman from Kishu (present-day Wakayama Prefecture) named Jintaro who was shipwrecked in a storm. After being washed up on the shore of Usanoura, Tosa (present-day Kochi Prefecture), Jintaro tried smoking the skipjack tuna that he had over a wood fire, which dramatically improved the fish's flavor. This is said to be the beginning of smoke-dried skipjack tuna, known as arabushi .

A century later, around 1770, a method was developed of further refining arabushi by growing mold on it. There are several theories regarding the origin of this method, including that a merchant from Tosa came up with the idea and that arabushi in a wooden container accidentally molded while being shipped by boat, after which mold came to be grown intentionally as it was found to enhance the flavor. Another story along similar lines goes that a wholesale dealer of katsuobushi, who was hesitating to throw out some arabushi that had grown moldy in his warehouse, discovered that its flavor had intensified.

The gist of every story is that the technique grew out of a chance discovery following the misfortune of arabushi getting molded. The wisdom and experience of the Japanese, who have invented a wide variety of preserved foods by harnessing the power of fungi, appear to have played their part as well in the development of dried bonito production.

Dashi, a taste that has been such a close and integral part of Japanese life, is growing into—of all things—a luxury. Making awasedashi involves soaking kelp in a pan of water, putting the pan over a flame, removing the kelp after its umami (savor) has seeped into the near-boiling water, and then adding shaved katsuobushi . It has already been many years since this process went from being accepted as a normal and indispensable part of everyday food preparation to being considered a hassle.

The greatest factor behind this change of perception is probably the emergence of convenient alternatives, such as instant miso soup, instant noodle soup base that is used simply by diluting, and granulated chemical seasonings that are advertised as offering the savor of kelp and flavor of bonito without the need to make dashi from scratch. The growing popularity of Western food has also played a part in depriving natural dashi of its everyday status in the average Japanese diet. Reliance on chemical seasonings is even more pronounced in the fast food industry than in the home, and the opportunities particularly for young people and children to relish the taste of natural dashi appear to be steadily decreasing.

More than Just a Dried Food

The crisis for dashi translates into a crisis for katsuobushi . Katsuobushi is not just a dried food made by simply desiccating skipjack tuna. Like miso, soy sauce, sake, and sweet rice wine, it is also a fermented food completed by fungal fermentation, a major characteristic of Japanese food culture.

There are several different kinds of katsuobushi, as well as different production methods. The principally used method also varies from region to region. Below is an outline of the different methods of production.

1. Mold consumes the moisture in the meat to sustain itself, thus accelerating desiccation.

2. Mold has the ability to decompose fat, ridding the meat of both its fat and smell and converting the fat into soluble fatty acids. The process also takes the edge off the taste, enhancing the savor and aroma.

3. Mold breaks down proteins into amino acids and other nitrogenous compounds, which also increase savor.

4. The coating of mold keeps off other microorganisms.

5. Mold breaks down the neutral fat and increases free fatty acids, resulting in a clear soup when katsuobushi shavings are boiled.

Katsuobushi is a food product completed by putting skipjack tuna through a complex manufacturing process and a period of fermentation and maturation. As such, its production requires the practiced eyes and hands of artisans who are trained in traditional skills. We visited Makurazaki-shi, Kagoshima Prefecture, to learn about current conditions in this industry.

Makurazaki is the largest producer of honkarebushi, and artisans of this city have maintained sophisticated skills to ensure the quality of their products. Honkarebushi of the Satsuma type, in particular, is peculiar to the city. It is an exquisitely shaped product made by an age-old method with premium-quality skipjack tuna and superior craftsmanship. Many professional cooks in Kyoto, a city famous for its abundance of top-class Japanese restaurants, specifically ask for the Satsuma type when buying katsuobushi .

Nowadays, though, only a few people in Makurazaki still know how to make Satsuma-type katsuobushi, which calls for mastery with the knife and a production process that is far from efficient. Motomu Otsuji of the Yamatsuji Store is one of them. Otsuji makes honkarebushi by the following method.

The fish is cut up manually when making Satsuma-type katsuobushi, and the head is not severed beforehand. Skipjack tuna weighing seven kilograms or more are used for the Satsuma type.

Depending on the fish size and how it is cut, the fillets may be classified into two categories.

The quarter fillets are lined in a metallic basket called nikago and lowered into a special open kettle to be simmered for about two hours. In addition to sterilizing the fillets, this coagulates the protein in them, preparing them for smoking. The fully coagulated protein prevents inosinic acid, which makes up part of the savor of katsuobushi, from breaking down during smoking.

After being cooled down, the simmered fillets are rid of the bigger bones and part of the skin, which had been left intact in step two. Not all of the skin is removed, partly to keep the fillets from losing shape and also because its shrinkage serves as an indicator of how well the fillets have been dried and smoked.

The fillets are fumigated using firewood in the drying room, then cooled down. This is repeated many times for about a month until the fillets turn into the arabushi state. Once the charred surface is trimmed and the shape is adjusted, the fillets become hadakabushi .

The hadakabushi are coated with mold and sun dried. The process of applying mold, sun drying for about two days, and storing away for about two weeks is repeated during three or four months. The mold is faintly blue at the time of the "first mold," but as fermentation progresses the surface yellows, until finally, by the "third mold," it takes on a whitish tint and comes to resemble deadwood. Applying mold several times over reduces the water content to roughly between 18 and 20 percent. The end result is honkarebushi, the ultimate form of katsuobushi as a fermented food.

Today Makurazaki, being home to a fishing port that boasts top-level catches of skipjack tuna, produces more katsuobushi than anywhere else. Between April 2007 and March 2008 the city's producers turned out 13,992 tons, which accounted for 43 percent of the katsuobushi made in the three major production areas. The other two areas are Yamagawacho (now merged with Ibusuki-shi), Kagoshima Prefecture, and Yaizu-shi, Shizuoka Prefecture, which produced 9,971 tons (31 percent) and 8,631 tons (26 percent), respectively.

As noted earlier, natural dashi and katsuobushi are becoming less and less a part of everyday Japanese life. But production of katsuobushi is not falling, as might be expected. Quite to the contrary, the output in Makurazaki grew from 6,593 tons in 1980 to 10,421 tons in 1991, passing the 10,000 mark for the first time, and further rose to 15,856 tons in 2006. Of this last figure, 493 tons were in the form of shiagebushi ( honkarebushi ), 14,511 tons were arabushi, and the remaining 852 tons were wakabushi, or semidried katsuobushi .

The secret behind the paradoxical rise in production lies in how the katsuobushi are used after being shipped out. Aside from being sold as shavings, a significant amount is evidently processed for use in such products as freeze-dried instant miso soup, ready-made noodle soup, and granulated bonito-flavor seasonings. As things stand, the increase in katsuobushi consumption is only possible thanks to the diversity of hassle-free products like granulated and liquid instant dashi .

Dashi is a mainstay of Japanese cuisine. But if the Japanese continue to drive natural dashi out of their lives, it may not be long before katsuobushi, an essential ingredient, and the traditional craftsmanship that has underpinned its production pass out of existence. To preserve the taste of genuine dashi, traditional katsuobushi production must be kept from becoming an unstable and unrewarding job, and traditional skills must be kept alive. It is in the hands of consumers to make this happen by favoring natural dashi over chemical alternatives. 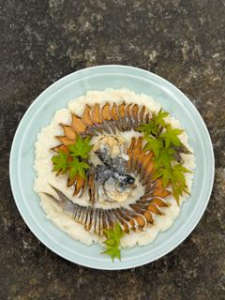 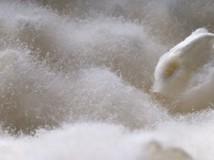