Japanese tea owes its green color to the lack of fermentation. While steamed teas are far more common, there is another kind of unfermented tea that has a stronger aroma: pan-fired tea, or kamairicha . The first installation of a two-part series, this article explores the history of this aromatic tea and visits producers in Kumamoto Prefecture.

An Overview of Japanese Tea

Shizuoka Prefecture is synonymous with Japanese tea. It is Japan's capital of tea production in many ways, annually producing approximately 40,000 tons of tea and being home to numerous famed tea-producing areas, including Kawane, Honyama, Ryogochi, Makinohara, and Fuji. The most popular type of Japanese tea is sencha (steeped tea), and it hardly needs saying that much of the tea produced in Shizuoka is of this kind.
Tea can be largely classified into three categories: unfermented, semifermented, and fermented. Most unfermented varieties are steamed teas, and the great majority of Japanese teas belong to this group. Of the roughly 91,800 tons of Japanese tea domestically produced in 2006, no less than 90,130 tons were produced by the steaming method. 1
But there is another kind of unfermented tea produced in Japan: pan-fired (Chinese-style) tea, the subject of this article. Called kamairicha in Japanese, this tea is made by roasting tea leaves in an iron pan, giving them a rounded shape, and has a distinctive aroma.

Steamed tea has a fresh, invigorating, grassy aroma and is appreciated for its flavor. Tea leaves are ordinarily steamed for about 30 seconds, but recently popular is deep-steamed tea, in which the leaves are steamed for between 60 and 120 seconds. The resulting tea is deep green and cloudy, and drinking it is rather like crushing the leaves and relishing their very cells.

Deep steaming involves first steaming fresh leaves. After cooling, the steamed leaves are dried with heat as they are kneaded and rolled into a needle-like shape. Tea at this stage is called aracha , or crude tea. As tea leaves need to be promptly heated to stall the process of oxidation that begins as soon as they are picked, they are usually made into aracha by the growers themselves or at cooperative tea manufacturing factories near the farms. Once the aracha leaves are cut to length, sorted, and fired one last time, they become shiagecha , or refined tea. Perhaps due to this production method, some people feel that Japanese tea is less fragrant than it used to be.

Kamairicha (pan-fired tea) is made by a very different method. Tea leaves are roasted in an iron pan on high heat, which neutralizes the grassiness that characterizes steamed tea, at the same time revealing the underlying aroma inherent in them. Roasting apparently makes the leaf tissue firm, giving the tea a clear, yellow-green color with a faint reddish tint. The taste is light and understated, and one can drink cup after cup without tiring of it. Intriguingly, the aroma becomes stronger in the second infusion than in the first.

The History of Pan-Fired Tea

The history of kamairicha goes back many centuries. Regarding its origin in Japan, some say that the priest Eirin Shuzui introduced the production method along with tea seeds to the temple Reiganji in Yame-shi, Fukuoka Prefecture, in 1406. 2 Others credit a Chinese man by the name of Ko Reimin, who allegedly brought the Chinese-style roasting pan to Ureshino-shi, Saga Prefecture, in 1504. 3

Steamed tea, meanwhile, is believed to have been invented in 1738 by Nagatani Soen, the founding father of what is now the major food brand Nagatanien. Until then, commoners drank pan-fired tea and crude teas made by boiling or drying tea leaves. 4

Today, kamairicha is only produced on a very limited scale in western Japan. Where it is produced, however, it is done so by the same method as in the old days to create the fragrance for which it has always been known.

I visited Shigeo Funamoto, a 69-year-old tea farmer who proudly produces kamairicha in the town of Izumimachi, Kumamoto Prefecture. With less than 3,000 residents, Izumimachi is a small mountain village in southeastern Kumamoto Prefecture, nestled in the Kyushu Mountains at altitudes from 100 to 700 meters. It traditionally thrived on producing kamairicha , but with the aging of the population, production has diminished to one-third that of peak years and is still falling.

Funamoto lives in the community of Kuriki, which is located on the side of a 300-meter-high mountain. This is also where he grows his tea. Funamoto is one of only two producers in Kumamoto Prefecture who currently make kamairicha in the Aoyagi style.

No sooner had we arrived at his home than we sat down over tea and pickles, and so began our interview.

"We've got a mountain here, and what with the slopes giving us good drainage, people used to say that tea made in the mountains tastes good. And the aroma, well, kamairi does that best. Kamair i is all about the aroma. This tea can be infused many times. You can do four or five infusions, and it still won't get bitter."

Remarking that making kamairicha is a chore, and an unprofitable one at that, Funamoto explained to me why makers of this type of tea have been decreasing over the past 30 years all across the island of Kyushu.

"Here in the countryside, we can't charge high prices. The same tea that might fetch a thousand yen or a thousand and five hundred in Tokyo won't sell for more than a thousand yen here. But pan firing can't really be mechanized. Even the fuss-free Mori-style machine 5 can only process forty kilograms of fresh leaves an hour, and when it comes to the Kaneko-style machine 6 , ten kilograms is the best you can do. With steamed tea, on the other hand, if you have three machines doing sixty kilograms each, you can process a hundred and eighty kilograms in the same amount of time. And yet the price of the finished product is no different. Kamairicha just doesn't pay off."

The Problem of "Faceless" Distribution

In general, tea farms—whether operated privately or cooperatively—sell their tea in aracha (crude tea) form. Although there are some farms that single-handedly grow, refine, and market their own tea, the overwhelming majority take their tea only as far as the arach a stage before selling it to tea retailers. The retailers then blend and refine the aracha to their preference and market the tea under their own brand.

What is confusing is that the names of both the farms and the retail brands usually take the suffix – en , literally meaning "garden," making it impossible to know who actually produced the tea. It is also unclear whether a specific product comes from a single farm or is a blend of teas from several farms. Retailers using domestic tea leaves are only required to indicate their product as such, regardless of the region of origin and whether or not leaves of different origins have been blended. Even more surprisingly, there are no labeling requirements regarding the tea variety and processing method used, which consumers should be allowed to choose from.

"Faceless" distribution is thus the norm in the world of Japanese tea. Teas are sold under brand names that could just as well refer to the place of origin, the company, or the product. Under the facade of brand names that have become entrenched as codes for Japanese tea, the production method, the variety of tea, and the producers change over time unknown to consumers.

Switching From "Mirui" Tea to Tea for Drinking

Funamoto made kamairicha his life's passion after a fateful encounter several decades ago.

"I began winning first prize in prefectural and national competitions, but at the time it was all miru i tea. Mirui means that the finished tea leaves aren't whitish in appearance but are green, and that the tea is made from young leaves that haven't yet acquired much flavor."

The Funamoto family originally engaged in forestry work. Funamoto turned his rice paddies into tea fields in 1973, as the government launched a rice production adjustment program. He was in his late thirties by the time he became a full-time tea farmer and began winning prizes for his tea. These prizes drew inquiries from consumers, leading Funamoto to directly sell tea.

It was then that he met Seiji Ogawa . 7

"So when I was making mirui tea, Mr. Ogawa came to Kumamoto, and he treated me to an unusual tea, which was reddish in color. Thinking back now, I guess it was Chinese tea. Anyway, it was a really delicious tea that didn't grow bitter even after five or six infusions. And he said to me, you'd be better off switching from mirui tea to 'tea for drinking,' if you're going to do direct sales."

Following this episode, Funamoto gave up competitive tea making once and for all and gravitated toward making tea in the time-honored Aoyagi style. He would make a 'drinking tea' of his own, he decided, using the processes of wilting 8 —a seeming contradiction of the concept of "unfermented tea"—and pan firing to draw out the aroma. The encounter with Ogawa led Funamoto to question what was considered common sense in tea making.

The Potential of Pan-Fired Tea

Funamoto suffered a serious illness in October 2003. Since then, his son has been helping him on the Mori-style continuous machine. He once resigned himself to the thought that he would have to give up on Aoyagi-style tea making, which requires skill, but he resumed production in 2007. Only as much as I can handle, he told himself.

A younger tea farmer, 40-year-old Kazuya Matsumoto of Sakurano-en farm in Minamata-shi, Kumamoto Prefecture, also produces kamairicha . Matsumoto, who has organically grown tea without using any pesticides or chemical fertilizers for more than 18 years, has been producing kamairicha through trial and error, believing in its future.

" Kamairicha is especially good in the fall. You age the tea, you see; if you feel that the tea tastes a bit harsh in the spring, you can put it away until the fall, and the astringency will have been replaced by sweetness. Tea that I felt came out well will stay good for many years."

As explained earlier, kamairicha is an unfermented tea, and no fermentation means no wilting. Or so it did until Funamoto came along and decided that wilting was essential to producing tea that expresses its natural aroma.

The Chinese are said to have created such a rich diversity of aromas in their teas because they were able to tap the infinite potential of wilting. In 1391 Hongwu, the first emperor of the Ming Dynasty, banned the compressed teas that had been produced until then and ordered that loose-leaf teas be made instead. It was as a result of this order that the Chinese eventually invented the pan-firing method and other techniques to draw out the aroma of tea.

4 Yoichiro Nakamura, Bancha to Nihonjin (Coarse Tea and the Japanese).

5 A powered pan-firing machine that can continuously roast tea leaves.

6 A tea-making machine with a single round roasting pan. The machine simply stirs the tea leaves in the pan. Kneading must be done separately, and constant intervention is needed not only in heat control and timing, but in everything from roasting to kneading.

7 Representative of the Japan Tea Club and the Jocha Association. Together with the late Yaeko Ogawa, Ogawa has devoted his life to popularizing tea as an everyday beverage. He continues to actively write and give talks.

8 Wilting involves promoting enzymatic oxidation of freshly picked leaves to draw out their characteristic aroma. This is always done with oolong teas and black teas, but steamed teas are steamed without wilting, a process called kill-green. 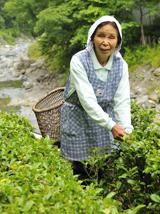 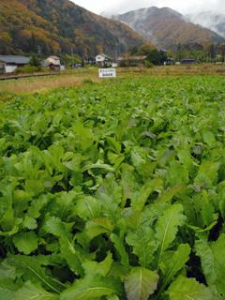