Only a few decades ago, Japan and Europe were embroiled in a highly contentious “trade war.” In the years since then, though, ties have expanded well beyond the domains of trade and investment, Senior Fellow Akiko Fukushima notes, and we are now cooperating in areas ranging from politics and security to education and cultural exchange. Negotiations are now underway on a free-trade agreement, and the two regions are emerging as important partners with shared values. The following is reprinted with permission from the April 2, 2014, edition of the Japan News .

On March 10, 2014, about 200 representatives of government, academia, business and media from EU member states, Japan and other Asian countries gathered at a hotel in the European Quarter of Brussels for a conference titled “EU-Japan: Ready for a New Stage in Relations?” which I also attended as a panelist. Hosted by Friends of Europe, a Brussels-based think tank, the conference explored several questions: “What are the roadblocks in fostering Japan-EU relations?” “How can Japan and the EU move to the next stage of cooperation?” and “What is the grand future vision for the relationship?”

In order to answer these questions, we must put Japan-EU relations in a historical perspective. Only a few decades ago, Japan and Europe were embroiled in a highly contentious “trade war.” In the years since then, though, both the EU and Japan have tried to expand their relationship well beyond the domains of trade and investment to areas ranging from politics and security to education and cultural exchange.

The decisive “Battle of Poitiers” between Japan and Europe was fought not in 1356 but in 1982, when Japanese VCRs claimed almost 90 percent of the French market. In order to stop the massive ﬂood of imports from Japan, France shut down the customs clearance office at Le Havre and moved it to Poitiers, a development symbolizing the trade war between Japan and Europe during the 1980s. We have come a long way since then.

There are lingering differences between Japan and Europe over certain issues, such as capital punishment, but they are certainly not ﬂagrant enough to constitute a “war.” Instead, we tend to focus today on shared universal values, such as freedom, democracy, respect for fundamental human rights and the rule of law, as well as on common principles like a market economy. In fact, Japan and Europe see great potential for further collaboration, going beyond the traditional domains of trade and investment.

In 1991 Japan and the European Community adopted a joint declaration that expanded our areas of cooperation to political and security areas. Ten years later, in 2001, the two sides adopted an action plan to promote cooperation in areas ranging from politics and security to education and cultural exchanges. Through these steps, relations between Japan, the EU and its individual member states have grown steadily.

Now the relationship is about to move up to the next stage. Japan and the EU are currently negotiating two new instruments, namely, a strategic partnership agreement (SPA) and a free trade/economic partnership agreement (FTA/EPA). Japan and the EU may not have identical economic interests, but when agreement is reached on an FTA/EPA, this will no doubt beneﬁt not only our two economies but also the global business community.

An SPA, meanwhile, should offer a new paradigm for cooperation on a variety of political and security challenges. Security issues are no longer conﬁned to traditional concerns about territorial integrity, although these are still very important, as we are witnessing in Ukraine. Worries also include fragile states, terrorism, the illegal trafficking of humans and narcotics, the proliferation of weapons of mass destruction, pandemics, climate change, natural disasters and cyber-attacks, to name a few. These security concerns are not only diversiﬁed but also intertwined and indivisible, thus requiring a synergistic approach to ensure an effective response.

When examined closely, Japan and the EU have long been working on similar agendas at similar locations, although such cooperative efforts have often gone unnoticed. Both have contributed to peace and stability in such areas as the Balkans, Afghanistan, East Timor and the Horn of Africa through the mediums of diplomacy, security cooperation and development assistance.

Japan’s dispatch of Self-Defense Forces to Djibouti to conduct antipiracy operations in the Gulf of Aden is one illustration. On Jan. 18, 2014, the EU’s antipiracy Operation Atalanta, with the support of a Japanese Maritime Self-Defense Force patrol aircraft and a helicopter from the Japanese destroyer Samidare , apprehended ﬁve suspected pirates in a dhow. In the Horn of Africa, the EU has been training coast guard members at the Jazeera Training Camp in Mogadishu, Somalia, while Japan is offering training for the Djibouti Coast Guard. Such capacity-building assistance can be combined in the future to establish a robust and seamless law enforcement presence along Africa’s eastern coast.

The EU is pursuing its initiatives in fragile and conﬂict-affected countries in the Horn of Africa and the Sahel region under a “comprehensive approach” combining a wide array of policies and tools at its disposal spanning diplomacy, security, defense, ﬁnance, trade, development cooperation and humanitarian aid.

While Japan’s traditional geographical focus has been on the Asia-Paciﬁc, this has recently been expanding to cover broader areas, as exempliﬁed by Japan’s hosting of the Tokyo International Conference on African Development. Indeed, Japan has deployed an SDF engineering unit comprising approximately 400 personnel to the U.N. Mission in the Republic of South Sudan since 2011, and last year, members of the SDF, Japan International Cooperation Agency and nongovernmental organizations worked together to rebuild the main road in the Nabali district of Juba, the nation’s capital.

Local people had been unable to use the road due to ﬂooding during the rainy season, and this was considered a factor in the area’s persistent epidemics. But with the road rebuilt and drainage ditches provided, the road can be used year-round. The mayor of Juba remarked that, for the people, the project symbolized the arrival of peace. Sadly, though, conﬂict has returned. Even so, Japan feels that combining different actors in addition to dispatching SDF personnel, as in the South Sudan case, is an effective approach and has utilized it in several multinational operations, starting with Samara, Iraq, in 2003 and Haiti in 2010.

In its ﬁrst National Security Strategy announced in December 2013, Japan outlined a policy of using the tools and policy instruments of diplomacy, defense, and development assistance to promote the peace, stability, and prosperity of its own country, the Asia-Paciﬁc region and the international community. Japan has also announced a commitment to make a proactive contribution to peace based on international cooperation.

Thus, despite the differences in terminology—human security versus comprehensive approach—Japan and the EU are two soft-power partners with a common agenda and common values. Countries that “threaten” each other or do not share values cannot be partners. In the globalized world, many of us may have a common agenda but not necessarily common values. Capitalizing on our respective strengths and shared values, Japan and the EU should be ﬁghting alongside one another, rather than against each other. The battles today are not over VCRs but should be waged against threats to the peace, stability and prosperity of our respective countries and regions, as well as of the global community.

Taking our partnership to the next stage requires imagination, wisdom, political will and leadership to clear the roadblocks to a broad-based coalition, not only in traditional economic areas but also in our political, security and cultural relations. We will need to coordinate our activities in putting the pieces of the jigsaw puzzle together. When the pieces ﬁt, Japan and the EU will emerge as even stronger architects in the building of a resilient international society. In the age of unpredictability, resilience—the capacity to manage crisis rather than be overwhelmed by it—will henceforth be a key component of our ties as well as for the international community. 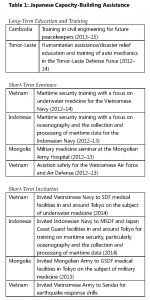