The deep rifts of the Huangtu Plateau in Datong are a fascinating sight for visitors, but they also expose the consequences of overcultivation that results in a vicious cycle of environmental degradation and rural poverty. Kunio Takami of the nonprofit Green Earth Network introduces the harsh conditions that villagers in Datong must brave and the policies that have been implemented to halt the ongoing process of desertification.

Koji Hashimoto is a photographer whose work focuses on farmers and the villages where they live. Over the course of six years he traveled to the Huangtu Plateau in Datong, and in 2001 he published a book of photographs documenting life there. Almost all the landscape photos in the book show the distinctive eroded valleys of the plateau—deep rifts that the elements have cut into the silt-like loess soil. The rifts, some of them up to 100 meters deep, can be seen everywhere on the plateau and are familiar scenes for the people who live there. But they have a strange fascination for visitors from abroad, few of whom have ever seen anything like them before.

Average annual rainfall in the region is around 400 millimeters, two-thirds of which is concentrated into a three-month period from mid-June. The rain often comes in short, concentrated bursts that drench one narrow area at a time; from an elevated vantage point, one can see black clouds moving across with great speed and the rain falling from the sky like a black curtain, often accompanied by violent lightening. I was in Datong several times when it received some 70 mm of precipitation per hour. In Japan, “guerrilla rain” is a phrase used to describe the summertime downpours that have become more frequent in recent years; it is also a perfect description for the violent deluges of Datong.

Over the course of its long history, the Huangtu Plateau has lost its woodlands and forests, so the rain now beats down on the naked earth, unprotected by vegetation. The rainwater quickly washes away, often taking the topsoil with it. The loess soil is basically silt, made up of tiny grains that have a particle diameter of between 0.004 mm and 0.06 mm. When it is dry, it bakes hard so that you can barely break it with a shovel. Once decompacted, though, it splinters into fine wisps of powder-like sand, easily carried away on the wind. And the slightest amount of water is enough to turn it into a greasy, liquid slick.

Good farm soil does not appear out of the blue but is the result of hard work by many generations of farmers to make it fertile. Producing a centimeter of farm soil is said to take more than a hundred years. When the earth is washed away year after year, the quality of the soil deteriorates, and its capacity to support crops and other vegetation is lost. This is the process of desertification that has led to the Huangtu Plateau we see today. Ironically, rainwater is a chief culprit behind the rapid desertification here in recent years.

“Fields of the Three Runaways”

A true picture of this process is hard to grasp from a simple description. According to figures released by the Chinese government, more than 1.6 billion tons of earth flows into the Yellow River from the Huangtu Plateau every year. To illustrate just how much this is, I often ask people to guess how long a levee—measuring 1 meter high and 1 meter wide—one could build with this volume of soil. The choices I give are that it would be enough to circle the Earth at the equator 0.5 times, once, 3 times, 5 times, 10 times, and 30 times.

Generally, less than 1 in 10 is able to guess correctly. Based on a soil density of 1.4 grams per cubic centimeter, the levee would measure 1.14 million kilometers, which is 30 times the Earth’s circumference. This is the amount of soil that is carried away by the Yellow River each year.

Local people describe the seriousness of the erosion with a phrase that translates roughly as “fields of the three runaways,” referring to the way in which the water, earth, and fertilizer escape from the fields every time it rains. In areas where steep hillsides are common and there is only a shallow level of topsoil, farmers grow their crops in fields that slope at an angle. Visitors are always astonished by the sight of these sloping fields and ask, “Why would anyone grow crops in a place like this?”

Dazhai, which became famous as a result of Mao Zedong’s 1963 directive for the nation’s farmers to learn from this village’s example, is 270 km south of Datong in Shanxi Province. The problem of water erosion was particularly severe here, and to reduce the damage, local people organized mind-boggling landscaping and irrigation projects to turn the sloping fields level by creating a remarkable concentration of terraced fields. This achievement was what led Mao to extol the region’s farmers as a model of hard work and self-reliance.

I visited Dazhai three times during the 1970s. Having grown up in a poor farming family in Tottori Prefecture, I could not help being impressed by the evidence of diligence I saw there. Just like in Japan, farmers in China have achieved great things through hard work. But a friend who visited Dazhai at around the same time remarked to me that he did not hear a single bird singing while he was there. The reason, he realized, was because hardly any trees or forests were left in Dazhai.

The fact is that the summer rains are only half the reason for the rapid pace of desertification; the rest is due to human activity. The biggest factor in the deforestation of the Huangtu Plateau is overcultivation, with farmers plowing fields everywhere they could find space—including steep mountainsides.

Grazing sheep and goats are another problem. The damage is most serious in early spring, when goats, desperate for something to eat, tear up the grass by the roots with their front legs because there is no greenery left. People working in afforestation projects say that if 100 people plant trees, 100 goats will soon come along to eat them all up—even on steep, rocky slopes. The government is working hard to minimize damage by restricting grazing, but since the income from pasture animals, albeit small, is significant to farmers in the poorer villages, it has proven impossible to eradicate this style of farming entirely.

Some trees have also been cut down by local people for fuel. Datong is one of the most important coal-producing areas in China, and for many years coal was the main fuel used in the farming villages. But the rise in crude oil prices has sharply pushed up the price of coal as well; what was 60 yuan a ton in 2000 rose to 850 yuan in 2008 and is now more than 1,000 yuan. This has put coal out of the reach for many farmers. Instead, they burn the stalks and cobs of corn and sunflowers and the straw made from millet and similar plant materials; increasing numbers have also turned to the mountains to make up for any shortage.

The tendency is for farmers in poorer villages to have more children, perhaps due to the pressure to continue having children until a boy is born. There are fewer farmers in mountain and hillside villages, and they need to look after larger plots, since poor water and soil conditions result in low yields. It is not possible to keep large animals like horses, cows, donkeys, or mules in these villages, so farmers must till the land with their own hands. Until recently, it was also necessary to travel long distances to fetch water, and men were thus needed to do the heavy work. Despite slogans reminding people that daughters are just as important as sons and are capable of carrying on the family farm, the preference for boys has persisted owing to the need for male workers.

I should add, though, that as people’s income has increased, they have become less particular about having sons, even in the farming villages. Parents comment that daughters who marry into a family in another village will come home from time to time, often bringing food and money, while sons rarely look after them after marrying. And people tend to have fewer children as school attendance becomes a normal part of life, even without government restrictions on the number of children.

One of the first experts to be dispatched to Datong by the Green Earth Network, in August 1994, was Hisayuki Maenaka (now representative director), who unlike most other experts—who worked either in the tropics or within Japan—specialized in the Inner Mongolia Autonomous Region and other arid areas of China. He pointed out that although natural conditions are much harsher in Inner Mongolia, both the villages and farmers are much poorer in Datong, shedding light on important but often overlooked links between population and land use that give rise to a vicious circle of environmental degradation and rural poverty.

Today, major changes are underway in these villages. Younger people have migrated to the cities to find work, leaving only old people and children in the village. After a while, the children also disappeared, and the only ones remaining in the mountains today are the elderly.

Change also resulted from the policies promoted under Premier Zhu Rongji to encourage farmers to abandon their fields on steep hillsides and other places not conducive to farming and to allow these areas to return to woodland. This “back to greenery” policy was a bold attempt to reverse the long history of single-minded expansion of arable land. In actual implementation, there was a tendency for projects (and money) to be concentrated in villages with the best farming and economic conditions, sometimes resulting in strange sights of high-quality, roadside farm fields being covered by pines and poplars. But there is no denying that rural villages have become greener and that the environment has improved.

In December 2008 Datong was hit by a severe cold spell that made it impossible for us to continue our work in the mountains. I took this opportunity to travel to Dazhai, where I saw major changes since my last visit. The Hutou Hills, one of the places where the symbolic terraced fields had been hewn out of the mountainside, had been turned into a forested park. Work had begun on the park in 1992, seven years before the government’s reforestation policy began on a trial basis and the same year that we began our regreening efforts in Datong. Just as human activity can destroy the environment, people also have the power to undo the damage and return the environment to something close to its original condition.

All photos taken by the author. 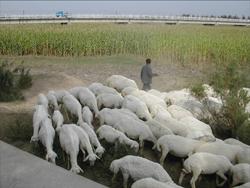 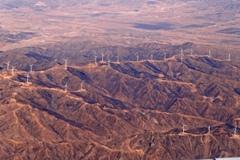