With many countries facing elections or leadership change this year, the problem of fiscal debt is expected to emerge as a major political issue. In Japan, too, the specter of a European-style debt crisis looms, with public debt soaring to unprecedented levels—likely surpassing 1 quadrillion yen before yearend.

The political debate on this crucial matter, though, has been practically devoid of substance. Neither the ruling party nor the opposition has offered anything more than stopgap solutions and groundless emotional reactions. We have yet to hear constructive debate predicated on the medium- and long-term fiscal outlook.

The debate over the consumption tax is a case in point. Without some sound, objective basis for determining the magnitude of the initial increase, and without reliable forecasts to indicate how that increase will affect government finances and what additional increases will be needed farther down the line, the entire discussion is no more than an exercise in partisan gamesmanship.

I believe that the methodology and quality of fiscal and macroeconomic forecasting is of profound importance for responsible policymaking, since it offers a quantitative basis for informed policy deliberations and decisions. In the following, I draw on the findings of a recent study of Japanese government forecasts carried out with Associate Professor Masumi Kawade of Nippon University and Tokyo Foundation Research Fellow Atsushi Nakamoto to reveal the flaws in our current system of forecasting.

I also propose guidelines for reform, incorporating principles that have met with success in other countries. In the process, I hope to offer some food for thought about responsible political leadership in a democracy, including the courage not to pass on the costs of beneficial government programs to future generations.

The Sorry State of Fiscal Forecasting

Fiscal and macroeconomic forecasts provide policymakers with quantitative estimates of the impact of expected economic changes and policies. All programs should be based on sound estimates from the outset, assuming that the goal is to meet social needs and not merely to implement policy for its own sake. And in view the seriousness of the fiscal and social-security challenges facing Japan today, our leaders should be relying on quantitative forecasts at each stage of the reform process, from initial study and deliberation to drafting and passage of legislation.

At first glance, it might appear that the Japanese government makes active use of quantitative forecasting, since each agency publishes a variety forecasts pertaining to multiple policies. But in fact, that is part of the problem. For one thing, the parameters and other assumptions that determine the results are often inconsistent with other analyses for reasons that are never adequately explained.

But the most fundamental problem is that the sections drafting the policies in each government agency are the same ones responsible for the analyses that back them up. And because most of the data needed to generate the forecasts is held by the policymaking ministry, it is extremely difficult for outside parties to verify them independently.

A typical example of the government's use of forecasts was seen in the estimates issued in connection with Japan's possible participation in the Trans-Pacific Partnership. Researchers at the Cabinet Office ran a simulation using their own macroeconomic model; the Ministry of Agriculture, Forestry, and Fisheries produced its own estimate of the impact on domestic agriculture; and the Ministry of Economy, Trade, and Industry produced an estimate of the impact on key industries. Needless to say, each of these analyses came up with different results—a classic case of agencies manipulating statistics to suit their own purposes.

For our recently issued policy proposal, members of the Tokyo Foundation project on the Outlook for Japan’s Economy and Public Finance conducted an analysis of forecasts issued by the government since 2000.

First, we conducted a posteriori assessments of the forecasts generated by the Cabinet Office (which plays a central coordinating function for the government as a whole) with its own macroeconomic model, comparing them with actual economic performance. We found that, for the most part, the predictions were neutral. When it came to the gross domestic product deflator, however, future predictions were skewed on the high side, even though the current data was generally consistent.

This bias most likely reflects wishful thinking on the part of a government anxious to conquer the deflation that has plagued the economy since the early 1990s. We also found issues with the transparency of the Cabinet Office's forecasts: Because public disclosure of the raw data is limited, the estimates are not subject to adequate independent verification.

Meanwhile, forecasts generated for specific policy purposes by the Ministry of Health, Labor, and Welfare, the Ministry of Finance, and other agencies tended to incorporate economic assumptions that were inconsistent with those used in other estimates. Furthermore, in the same series of forecasts, assumptions would change significantly from year to year for reasons that were unclear. For example, in its revisions of the 2004, provisional 2007, and 2009 actuarial valuations of the nation's pension system, the MHLW revised its projections for future wage growth and return on investment upward from the original reports, thus improving the outlook for the system's finances.

Needless to say, such practices undermine the people's trust in public policy. One might also note that, despite the government's stated intention of reforming taxes and social security as an integrated package, and despite the need for a constructive national debate on the subject, an integrated analysis of public finances and social security expenses is nowhere to be found.

Elsewhere in the world, governments have made considerable progress in the use of unbiased forecasting to impose discipline on public finances and social security. This has been made possible by a conscientious adherence to four principles of forecasting: (1) centralization of responsibility; (2) consistency of assumptions, models, and parameters; (3) transparency via the fullest possible disclosure of data and detailed explanations; and (4) independent generation or verification by legislative bodies, private organizations, and so forth.

South Korea's National Assembly Budget Office, a neutral, specialized organ established in 2003, follows the US example of giving the legislative branch a means of checking the power of the executive with unbiased data for use in budget deliberations. In Britain and Germany, where official forecasts are carried out within the administrative branch, the emphasis is on independent verification by private institutions.

In such ways, most countries have developed mechanisms that encourage independent experts, whether in the legislative branch or outside the government, to scrutinize and challenge the administration's estimates and help ensure their neutrality. In such an environment, policymaking is more likely to be based on objective predictions, even when they do not suit political purposes.

In relation to the four abovementioned principles, the first task for Japan today is to impose consistency on government forecasting methods, which now vary widely by ministry or agency. In this area, it would do well to follow the lead of Britain's Office for Budget Responsibility, charged with assessing the consistency of the estimates produced by the various ministries.

With regard to the centralization of responsibility, the Japanese government’s National Policy Unit would be the natural choice to oversee forecasting models under the government's current organization, given its stated role of strategically coordinating government policy. However, the government should also consider removing this function from the Cabinet Office, where the NPU is currently located, and setting up a specialized unit.

At the same time, it needs to pursue greater transparency through active disclosure of data and other information to facilitate verification by organizations and individuals outside the government.

The biggest challenge for Japan is independent verification, and in this both the Diet and private organizations have a role to play. The Diet should have primary responsibility for verification, but it will take some time for it to build a system and obtain qualified personnel.

In the meantime, the most realistic option is for the Diet to contract with universities, think tanks, or other nongovernmental institutions that have the requisite economic and legal expertise. In addition to performing the work commissioned by the Diet, private institutions should remain vigilant about verifying and challenging all economic and financial figures released by the government.

One of the major failings of democratic government in recent years has been the tendency for one cohort to reap the benefits of government policy while passing on the costs to the next. After all, the elections that determine the shape of the government are won or lost on the policies parties propose to deal with immediate problems. This means that, during economic downturns in particular, politicians are apt to adopt spending measures without regard to the burden on future generations, or to pass the fiscal responsibility on to the next administration.

Aware of this problem, countries around the world have been working conscientiously to build mechanisms controlling the methodology, execution, and use of fiscal forecasts so as to create a basis for responsible policymaking and legislation. They have realized that forecasting is not merely a tool to enforce fiscal discipline (although that is how it was seen at first) but, more fundamentally, a means of compensating for one of the major limitations of democratic government.

Forecasts based on sound economic models and data, generated or verified by neutral, independent organizations, have assumed an increasingly important role in policy making because they provide at least a partial counterbalance to the short-sighted focus our political system fosters.

Japan, too, must embrace the four principles of accurate and responsible forecasting if it is to overcome the current fiscal crisis and restore the people's faith in government. 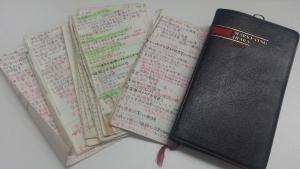 Making a Renewed Commitment to Integration