The Perilous Decline of Japanese Agriculture

The Decline of Japanese Agriculture in Figures

Major changes began to occur in 1961, the year in which the Agricultural Basic Law came into force with the aim of structurally reforming the agricultural sector. The changes, however, were ironically for the worse, not the better. Statistics show that between 1960 and 2005 agricultural production's share of gross domestic product (GDP) fell from 9.0% to 1.0%, the agricultural working population from 11.96 million to 2.52 million, the proportion of the total working population employed in agriculture from 26.6% to 4%, and the number of farming households from 6.06 million to 2.85 million.

Advances in mechanization in the high-growth era reduced people's working hours as machines took over tasks that had previously been performed by hand. If appropriate policies had been adopted, Japan could, like France, have taken advantage of this to increase both the scale and robustness of its agriculture. Instead, the reduction in working hours encouraged previously full-time farmers to find employment in other industries while continuing to farm part-time, causing many type-2 part-time farming households with micro-sized plots to remain in agriculture. This was especially true of rice farming, where mechanization made considerable progress.

Japanese agricultural production in 2002 was worth ¥9.9 trillion ($79 billion at the average dollar/yen rate for 2002 of ¥125 to the dollar). Subtracting agricultural intermediate input of ¥4.7 trillion ($37.6 billion) from this amount gives a figure of ¥5.2 trillion ($41.6 billion) for agricultural GDP in 2002 2 . Much of this, however, is accounted for by tariffs and price supports; the Organisation for Economic Cooperation and Development (OECD) calculates that Japan's producer support estimate (PSE), a measure of the cost of these support measures, is ¥5.3 trillion ($42.4 billion)-almost the same as its agricultural GDP. In other words, without the measures that protect Japanese agriculture, its contribution to the nation's GDP would be zero.

Essential Farmland Is at Risk

Without adequate farmland, there can be no food security. In the wake of World War II, a Japanese population of just 70 million suffered hunger even though the country had 5 million hectares of farmland. The farmland of Nagano Prefecture, one of Japan's leading agricultural regions, does not belong to the people of Nagano Prefecture alone; it also belongs to the people of Tokyo. We must not allow farmland to be converted into residential or commercial land under the pretext of asset management by individual farming households or of regional development by local governments. This is what is meant by "food security," and it is supposedly why agriculture has been given such generous protection.

For nearly 40 years, the government has been implementing production adjustment as a means of tackling Japan's persistent rice surplus; there is talk of further bolstering this adjustment, which already affects some 40% of the country's rice paddy area. Despite the country's falling food self-sufficiency ratio, the rice surplus encouraged the widespread assumption that Japan had too much farmland. The decrease in farmland resources that are essential to food security was not seen as a crisis. More rigorous production adjustment will lead to the abandonment of a further 390,000 hectares of cultivated land, an area 1.8 times the size of metropolitan Tokyo. Already some 180,000 hectares of rice paddies have been lost over the past 10 years.

Why Japanese Agriculture Is Unprofitable

There are two types of agriculture in Japan: land-intensive agriculture, such as rice and barley cultivation, whose low international competitiveness and need for protection through high tariffs are often cited, and non-land-intensive agriculture, such as the cultivation of flowers and vegetables. The latter features a high proportion of full-time farming households, many of whom make healthy profits by pursuing corporate-style farm management. It is in the former, land-intensive agriculture, where the problems lie. Although there are some farming households that make substantial profits from the production of rice, barley, and other land-intensive crops because they have amassed large blocks of farmland or have developed their own distinctive methods of processing or marketing their crops, most of the farmland used to grow crops like these consists of scattered, low-profit, micro-sized plots tended by part-time farming households. Besides the natural conditions that make Japan inherently short of arable land, much of the blame for this situation lies with policy failures, including a lack of effective policies relating to land zoning, artificially high rice prices that encourage micro-farming households to remain in agriculture, and an acreage-reduction policy that has prevented farms from taking full advantage of the merits of scale in rice production.

The above account merely scratches the surface of the dire straits in which Japanese agriculture currently finds itself. The 1957 White Paper on Agriculture listed five problems in Japanese farming: (1) low farming incomes, (2) low food self-sufficiency, (3) low international competitiveness, (4) the trend toward part-time farming, and (5) the fragility of the farming employment structure. Sadly, half a century later, all five of these still apply. Indeed, these problems are becoming more serious. Agriculture, which supplies the food that people/consumers need, is losing strength. The growing number of abandoned farms is an inevitable result of falling profits and agricultural decline.

For statistics and materials relating to agriculture in Japan, see the website of the Ministry of Agriculture, Forestry, and Fisheries:

The tables in the article were added by the Tokyo Foundation to deepen readers' understanding of the issues.

3 The 1946 land reforms implemented under the Allied Occupation limited both the area of land that landlords could rent out and the rent they could charge and transferred ownership of huge swaths of farmland from landlords to tenant farmers.

The Agricultural Cooperatives and Farming Reform in Japan (2) 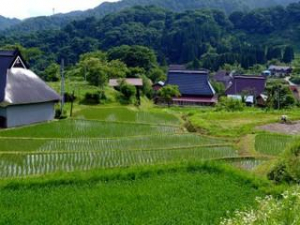 The Pros and Cons of Japan's Rice Acreage-Reduction Policy

Issues in the Farmland System

The Agricultural Cooperatives and Farming Reform in Japan (1)