Tokyo’s suburban communities are in danger of falling into decline and disrepair as the population ages and housing deteriorates. Drawing from a five-year study, economist Makoto Saito explains the need for smart and sensitive urban redevelopment policies.

From 2012 to 2017, I led a government-funded research project to explore the problems and options surrounding land use in Japan’s aging urban areas.[*] In the following, I draw on the study’s quantitative and qualitative findings to explore the phenomenon of “urban aging” in the Greater Tokyo Area and the challenges it presents.

A distinguishing feature of our project was the fact that it approached urban aging from the standpoint of two intersecting trends, demographic aging and deteriorating homes, especially as they impact suburban communities clustered around Japan’s large cities. Most discussions of urban economic issues posed by demographic aging and depopulation in Japan have focused on the outlying urban fringe, where problems have already emerged.

By contrast, we collected data from suburban communities that have thus far flourished (both economically and demographically) and demonstrated empirically that these communities will be confronting serious problems over the next 10 years, as both forms of urban aging progress. We made a particular effort to convey in easily accessible terms how much and how fast the aging of the local population and housing stock is likely to affect real estate prices and rents.

While the original study covers the metropolitan areas around all of Japan’s 20 government-designated cities (cities with a population of 500,000 or more), the following discussion is based primarily on data from suburban communities in the Greater Tokyo Area, that is, the four prefectures of Tokyo, Kanagawa, Saitama, and Chiba.

In our study of suburban communities in the Tokyo area, we found that the population and homes are both aging rapidly in mid-sized municipalities with a population density of around 10,000 per square kilometer. What are the basic factors driving this trend?

The first is that demographic aging in the Greater Tokyo Area is progressing centripetally, from the fringe toward the center. The second is that, while the population of Tokyo’s central wards has continued to grow, people in their thirties and forties are beginning to forsake the suburbs. The third reason is that so much of the housing in these suburbs consists of condominiums and apartment complexes built during the 1970s and 1980s, and these are deteriorating rapidly.

The combination of an older population and aging housing stock threatens to deal a double punch to some of Tokyo’s suburbs during the next two decades. Figure 1 shows the relationship between population density and changes in land prices in the Greater Tokyo Area. Land prices in communities with a population density of around 10,000 were more or less unchanged between 2010 and 2015, but they can be expected to begin falling between 2020 and 2025. In addition, our study shows that land prices fall as the percentage of older multi-unit housing stock rises. And the percentage of units built at least 30–40 years ago is rising much more rapidly in the suburbs than either in the fringe areas or in the urban core.

Figure 1. Relationship between Population Density and Changes in Land Prices around Tokyo 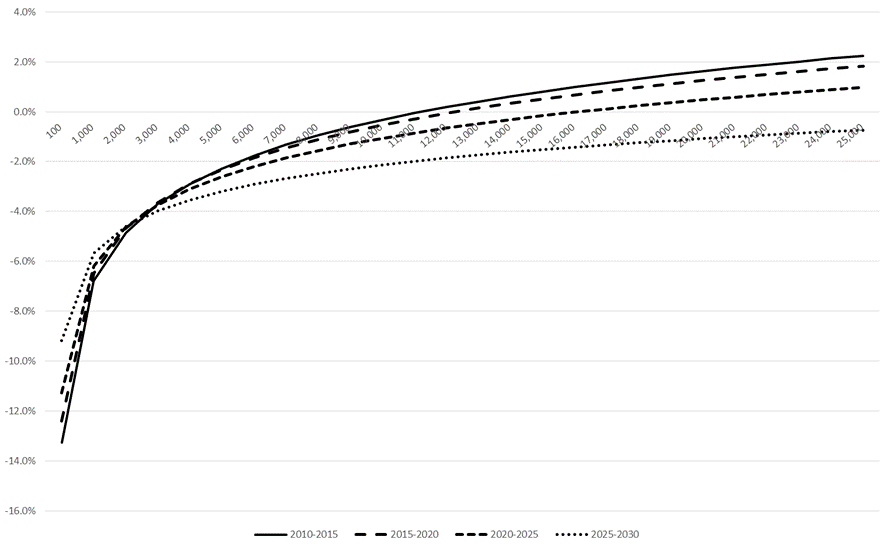 Efforts are underway in Tokyo’s mid-sized suburban municipalities to combat the effects of urban aging and upgrade the living environment. One example is Chofu, a city located within Tokyo Metropolis, about 20 kilometers from central Tokyo. The total population of Chofu is expected to hold more or less steady in the coming years, but the elderly population is projected to grow substantially. Meanwhile, city administrators are already facing the problem of aging multi-unit housing, including large-scale apartment complexes built before 1970 and condominiums built prior to key changes in the building code (including the adoption of floor area ratio limits in 1973 and the institution of new earthquake-safety standards in 1981).

The major thrust of Chofu’s suburban renewal program has been the wholesale redevelopment of the city’s large-scale housing complexes. This has involved not merely demolishing and rebuilding the structures themselves but also improving the grounds, especially pedestrian walkways. In the wake of such redevelopment, however, the percentage of residents aged 65 and older has dropped from 37% to 17%. The newly built multi-unit housing appealed to high-income families with children, and the elderly were crowded out. This highlights a difficult dilemma facing today’s urban planners: Policies and projects designed to upgrade the urban environment in aging communities have a tendency to make the targeted neighborhoods unaffordable for people in lower income brackets, regardless of age.

Let us look now at some of the other findings reported by the project’s members.

Takeshi So, a researcher at Recruit Sumai Institute, reported on the aging of rental units in Tokyo’s inner wards, as opposed to the suburbs. He found persistently high demand for centrally located housing among lower-income persons and determined that the vacancy rate in these areas is lower than that reported by the government’s Housing and Land Survey. At the same time, he warned of rapid growth in the stock of older rental units over the next decade. Figure 2 shows the prevalence of older rental housing units in Tokyo’s 23 wards as of 2017 and So’s 10-year projection. By 2027, the percentage of older units is expected to top 30% in most parts of the city (excluding the suburbs). 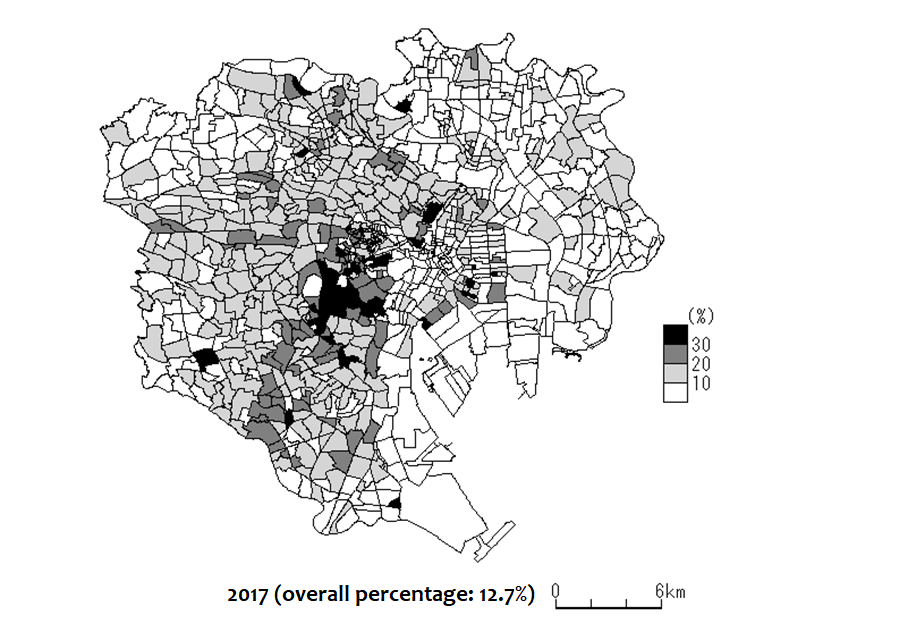 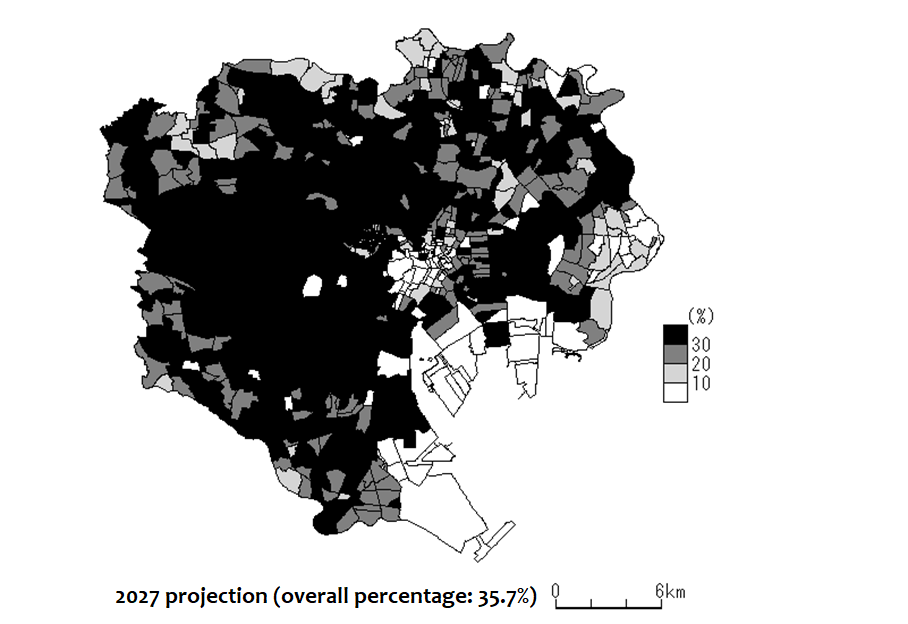 These older properties pose a real hazard to residents, since they were built under less stringent earthquake and fire codes. At the same time, the very age of these buildings is what allows low-income persons to live near central Tokyo, since rents tend to fall sharply as apartments age. In the absence of mitigating public policies, renovation of such apartment buildings could have the effect of crowding lower-income renters out of the neighborhood.

Hisaki Yamaga of Kwansei Gakuin University and Koji Karato of Toyama University reported on interregional migration trends using individual data from the government’s Housing and Land Survey. While migration has slowed since 2000, high-income households have tended to gravitate toward areas where the population and economy are growing. Interregional migration is thus contributing to a growing gap between growth areas and declining communities.

Movement within prefectures and municipalities has picked up, meanwhile, with people in their twenties and thirties leading the trend. According to Yamaga’s findings, this kind of short-distance migration is driven by information gleaned from the immediate living environment.

Masayuki Nakagawa of Nihon University analyzed the responses of a questionnaire survey that sought the feedback of Saitama Prefecture residents on long-term plans for local investment in public infrastructure and facilities. He found that respondents tended to agree with the basic thrust but disagree on the particulars. There was an especially strong reaction against plans for major long-term cuts and cuts targeting specific areas. He offered some fascinating observations regarding respondents and their reactions, noting that those who reacted most strongly against targeted cuts were not necessarily users of the facilities affected, and that people who moved around frequently tended to oppose plans for sweeping cuts.

At the same time, it was pointed out that attempts to build a consensus on development issues at the municipal level could be counterproductive in some instances. For example, when it comes to facilities that are part of a larger network, such as the water supply and sewage system, and those with negative externalities, such as waste-disposal sites, it may be necessary to advance such plans at the regional or higher level and limit the decision-making powers of the municipalities.

Toward a New Model of Urban Development

During the course of the project, there were numerous opportunities for participants to discuss various visions for the city of the future—among themselves, with other scholars, and with public administrators. Here I would like to present some key points that emerged from these discussions.

First, there was general agreement on the need for land and building owners to take responsibility for their property. From this standpoint, beefing up the fixed-property tax and inheritance tax could contribute to more efficient use of urban land. When it comes to rental properties in central urban districts, the owners should be responsible for meeting fire and earthquake safety standards, although public subsidies will be needed to help defray the costs.

In the future, requiring the first owner of a building to pay the cost of demolition (just as purchasers now pay the cost of recycling end-of-life automobiles and household appliances) would help speed up the “metabolic process” by which aging buildings are replaced with new ones. With regard to the problem of abandoned homes and lots, we looked at examples from Europe, in which the rights of individual property owners have been curtailed and local governments granted the authority to expropriate property for public purposes. We also learned of cases in which aging of the housing stock has prompted people to move out of certain areas.

A second topic that came up was the potential for reversing the traditional development pattern by converting declining residential neighborhoods into farmland or parkland. It was noted that Japan’s current urban planning system clearly establishes a place for farmland within so-called urbanization promotion areas (shigaika kuiki), opening a legal pathway to the conversion of residential neighborhoods into farmland.

Third, it was agreed that advanced information technology and artificial intelligence have the potential to fundamentally alter our transportation systems and change the very nature of the city. While an aging population means fewer commuters using mass transit, the use of individualized transport is likely to increase. The advent of such modes of transportation as self-driven community buses could nullify the notion of senior citizens as transportationally challenged.

In addition, advances in communication technology could render meaningless the current classification of communities based on distance from the city center by reducing the need for physical movement. On the other hand, since people in Japan are staying healthy longer, the increase in the elderly population could translate into an increase in the daytime population of our urban centers, which would be a positive development for our cities.

While warning of the impending impact of aging housing stock and underscoring the need for fine-tuned policies to cushion that impact, the findings of our study also help to dispel some of the pessimism surrounding the notion of “urban aging.” Indeed, I believe that this may prove to be one of the project’s most important contributions.

[*] The project, titled Research on Efficient Usages of Land and Housing Stocks in Downsizing Urban Areas, was supported by a competitive Grant-in-Aid for Scientific Research (A), administered by the Ministry of Education, Culture, Sports, Science, and Technology and the Japan Society for the Promotion of Science. The complete report has been published under the title Toshi no oi—jinko no koreika to jutaku no rokyuka no kosa (Urban Aging: Where Demographic Aging and Housing Decay Meet) (Keiso Shobo, 2018).

Rethinking the Value of Land in Twenty-First Century Japan