Japan’s consumption tax will rise to 10% in October 2019, yet the fiscal deficit will continue to balloon at least through fiscal 2020. Tax expert Shigeki Morinobu delivers a rebuke of the architects and overseers of the fiscal 2019 budget.

The centerpiece of the Japanese government’s budget for fiscal year 2019, beginning April 1, is an increase in the nationwide consumption tax—from the current 8% to 10%—set to take effect in October. The increase itself is consistent with a landmark agreement voted into law back in 2012. But the uses for which the additional revenues have been earmarked make a mockery of that commitment. And despite the impact of the tax on consumers’ pocketbooks, our lawmakers have failed to ask the cabinet the most crucial question: What exactly is the tax hike for?

The plan for comprehensive reform of the social security and tax systems adopted in 2012 called for the first net tax increase of the postwar era. The consumption tax rate was to be doubled, from 5% to 10%, in two steps. Of the increase, the plan set aside 4% for the “stabilization of social security”—in other words, reducing the government’s dependence on deficit-covering bonds to cover social security costs, thereby putting the budget on a more sustainable footing. The remaining 1% was to go toward enhancing social services and benefits, including long-term care, medical services, and support for childcare.

This scheme was not very popular, since it promised few immediate benefits despite the steep cost to taxpayers. The Ministry of Finance, for its part, compounded the public’s confusion and misgivings regarding the purpose of the tax increases. It explained that social security outlays were growing faster than consumption tax revenues and that higher taxes were needed to help diminish reliance on deficit-covering bonds and reduce the fiscal deficit. This, though, failed to address the public’s concern that tax increases, even if they help reduce bond issues, would contribute little or nothing to the enhancement of social services. 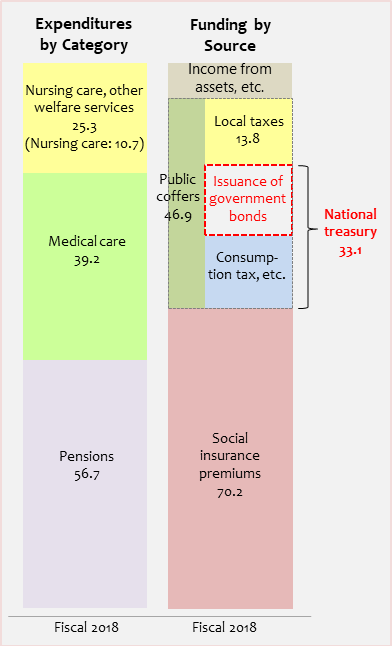 The government of Prime Minister Shinzo Abe implemented the first mandated tax increase (from 5% to 8%) in April 2014 but repeatedly delayed the second one. In October 2018, hoping to make the final 2-point increase more palatable to voters, Abe changed the ground rules, announcing that half of the added revenues would be devoted to education, childcare, and the like, while the remaining half would go toward deficit reduction.

The picture that has emerged since then bears little resemblance to that pledge.

According to the government’s budget, the 2-point increase in the consumption tax will inject an additional ¥5.2 trillion into the general account (with another ¥500 billion going to local governments). Of that total, the government has allocated ¥3.2 trillion to enhance social benefits and services: ¥2.8 trillion for such programs as free early childhood education, supplementary benefits for low-income pensioners, and subsidies to secure long-term care workers, and another ¥400 billion to offset the cost of the tax increase to healthcare facilities and providers.

That would still leave about ¥2 trillion for fiscal reconstruction, were it not for the additional spending measures the government stuffed into the budget. A full ¥700 billion has been allocated to “measures to cushion the economic impact” of the tax increase: ¥300 billion for reward-point rebates on certain cashless transactions, ¥200 billion for “premium vouchers” (government-subsidized shopping vouchers worth more than what consumers pay for them), and another ¥200 billion to help out home buyers and encourage construction of innovative housing.

To top it all off, the government has thrown in a totally unrelated ¥1.3 trillion package of public works projects (for “disaster prevention, disaster mitigation, and building national resilience”), ostensibly to offset the impact of the tax increase on the economy. Expansion of the housing loan tax credit and reduction of vehicle taxes will cost another ¥300 billion.

Altogether, the government has drawn on revenues from the consumption tax increase to deliver a stimulus package worth ¥2.3 trillion. Most of these programs will continue into fiscal 2020. When one adds in the second supplementary budget for fiscal 2018, the three-year price tag for this public-works program is ¥7 trillion. What purpose does this all serve beyond the obvious one of drumming up voter support in advance of the coming 2019 House of Councillors election?

The upshot is that, even with ¥5.2 trillion in added revenues from the consumption tax hike, the budget deficit will continue to increase in fiscal 2019 and 2020 (by ¥2.0 trillion–¥2.3 trillion). Only in fiscal 2021 (by the government’s accounting) will the tax increase have the effect of reducing the deficit.

To make matters worse, the government has cast aside basic principles of efficient and effective tax policy. Ignoring the advice of numerous experts, it has built a dual rate into the consumption tax for the first time. In terms of cushioning measures, the reward-points program is excessively complicated and expensive to administer. The real objective, after all, is to accelerate conversion to a cashless society (a goal quite separate from the stated purpose of the consumption tax increase), and it is being pursued without adequate safeguards to prevent accounting abuses and other forms of fraud.

With this poorly thought out grab bag of giveaways, the government has left the nation with a complex and costly system of breaks and incentives and a tax increase that fails to deliver on its basic promise. This is the kind of substantive issue that our lawmakers should be addressing in the Diet.

Toward a People-Centered Digital Society