A War-Torn Land Finds a Road to Peace

The Democratic Republic of the Congo has endured two wars in the last ten years. A peace treaty has been signed, however, and the first free election in more than 40 years has given the country hope.

The Democratic Republic of the Congo (DRC) has seen two wars in the last 10 years, dubbed “the first African world war.” The wars, which were essentially foreign yet fought on Congolese soil, saw military leaders choose violent solutions for seeking control, letting poverty and democratic governance fall by the wayside.

The wars also saw an emergence of international organized crime cells seeking to traffic arms and strategic minerals such as Colombo-tantalite ore, diamond, copper, cobalt, and gold. The cost of human life, as a direct or indirect result of the world war, has been scandalously high.

However, conflicts in central Africa still exist often as the result of poor governance, a characteristic of the condition of postcolonial African states. From the independence period, these states were supported by northern regimes that underestimated the consequences of corruption, human rights abuses, lack of the rule of law, and state and electoral fraud.

A quick look at the current state of Africa shows that the continent is in turmoil:

Studies suggest that the main causes of conflicts in Africa are related to the following main points: poor governance, tension around natural resources, ethnic differences, and nationalism.

With regard to governance, studies suggest that the colonial heritage in Africa is one of the primary reasons for the endemic instability on the continent, while the partitioning of Africa at the end of the nineteenth century proved to have had some of the most damaging outcomes.

Post colonial adjustments followed by the Cold War caused flimsy governance structures, with the superpowers worrying more about their own interests rather than those of the African states themselves. Today, the former colonists have become “the international community.” This international community provided means and political support to its allies but considered such issues as corruption, human rights abuses, lack of a rule of law, and state and electoral fraud as trivial matters.

For example, in 1972, genocide against Hutu intellectuals in Burundi was intentionally ignored by the international community. Rwanda saw the Tutsi victims massacred in the name of the so-called social revolution (1959), which was also ignored. In the DRC, Mobutu was never prosecuted for being a dictator, kleptomaniac, or human rights abuser until the 1990s. It was only when Rwanda and Uganda fought in 2001 in Kisangani for control of the diamond trade that the United Nations Security Council took action on the issue.

In the 1990s this situation led to the explosion or breakdown of existing political alliances. The holders of dictatorial power found they could not control the opposition,, the revolts, or the internal rebel forces because the international community had stopped protecting and financially supporting them.

The DRC has been through two successive wars since 1996. The first one started in September 1996 and ended on May 17, 1998. The second broke out on August 2, 1998, and is still going on today, particularly in the eastern part of the country. It is one of the worst conflicts seen in the world since World War II. The 1996 war killed 200,000 people, and the 1998 war saw 3.5 million dead and 2.5 million displaced, among them more than 400,000 children. The Food and Agriculture Organization of the United Nations reports that the percentage of malnourished people has increased from 35 percent in 1990-1992 to 64 percent in 1997-1999. This situation has made DRC one of the poorest countries in the world. In 2001, the United Nations Office for the Coordination of Humanitarian Affairs reported that 16 million Congolese people were under the minimum level of nourishment for survival.

The first war in the DRC involved foreign armies from more than nine countries, including Rwanda, Burundi, Uganda, Tanzania, Zambia, Angola, Zimbabwe, Eritrea, and South Africa. The stated objective of this coalition was to overthrow the dictator Mobutu, but apart from this common goal, each country involved had its own agenda, such as changing the borders of the DRC as inherited from the colonial period.

As a meeting of different wars on Congolese soil, some political observers consider the conflicts in the DRC to have been the first African world war.

We contributed to this fragile peace-building process by investing in protecting human rights, civic education, and popular participation. We also helped realize the first free election in the DRC in more than 40 years. However, elections do not always mean democracy, and the way forward still remains a challenge. After 32 years of dictatorship and 10 years of war, my country is yet to be rebuilt.

In January 2008, a peace conference was held in Kivu in northern DRC. The conference had the objective of initiating peace, stability, and development and putting an end to the war in North and South Kivu province.

The conference requested that the Rwandan and Burundian refugees return to their respective countries, as well as calling for disarmament and the repatriation of foreign arms groups still on DRC territory. After three weeks of work, the armed groups and the government signed, in the presence of the international community, an act of engagement for peace, known as the Amani Program or Peace Program.

The DRC is now run by an elected government under a prime minister, Antoine Gizenga, elected and appointed by the presidential majority party. We have a parliament with 2 chambers, 11 provincial parliaments, and 11 provincial governments. All these institutions are under the constitutional control of an elected president.

Although there had been a rebel group after the elections, the Amani peace conference convinced this last rebellion to recognize the authority of the state founded on the elections.

Today, we should put much emphasis on the reconstruction. This means organizing a system of good governance where all significant social bodies are represented at the political, economic, and military levels, promoting capacity building in administration, and judicial services, and achieving a regime without political army that is devoted to the people and not to the leaders. We will also promote a regional approach to conflict resolutions, understanding the major causes of wars at both the national and sub-regional levels, combat poverty through common programs of development, transform war economies to integrated trade, and implement common measures of conflict prevention similar to the methods of the AU (African Union) and UN.

The Second SYLFF (The Ryoichi Sasakawa Young Leaders Fellowship Fund) Prize was recently awarded to Rigobert Minani-Bihuzo, 47, a leader in promoting human rights and civic education in the Democratic Republic of the Congo in central Africa. Rigobert is the founder and representative of Groupe Jérémie, an nongovernmental organization actively engaged in these fields in the DRC and the African Great Lake region.

Overseeing the coordination of the first free election in the DRC in more than 40 years, he helped organize the Cadre de Concertation de la Société Civile pour l'Observation des Élections (CDCE), an association of 22 NGOs for election observation. Rigobert directed the activities of some 50,000 national observers and 125 international observers sent from the European Network for Central Africa (EurAc), a network of European NGOs. He has also been involved in various governmental efforts for cease-fires and reconciliation in war-stricken DRC.

Rigobert was invited to Japan for two weeks in January 2007 to receive the SYLFF Prize and to establish contact with individuals and organizations—both governmental and non-governmental—for future collaboration.

SYLFF (The Ryoichi Sasakawa Young Leaders Fellowship Fund) is a fellowship program established in 1987 to support promising graduate students in the fields of the social sciences and humanities. This program tries to nurture leaders of tomorrow who are willing to address issues of global concern and effect changes by proactively tackling them. The SYLFF program is a collaborative program by The Nippon Foundation and The Tokyo Foundation with the former donating the endowment of US$1 million each to each selected institution, and the latter being responsible for administering and promoting the network within and beyond the SYLFF community. As of now, endowments have been established at 68 institutions in 44 countries, and over 10,000 graduate students have received the SYLFF fellowship.

Rigobert received a SYLFF fellowship in 1995–1997 for his DEA (diploma of advanced studies) in political science at the Institute of Political Education “Pedro Arrupe” in Italy. 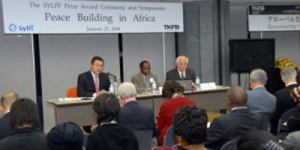