On winning the presidential election, Lee Myung-bak formed the Presidential Transition Committee. An expert on Korean politics analyzes what will happen to Korean foreign diplomacy in this period of transition.

On winning the South Korean presidential election at the end of last year, the Grand National Party’s President-elect Lee Myung-bak formed the Presidential Transition Committee and has been making preparations for the inauguration of the new government to be held on February 25. In the following paragraphs, we take a brief look at the course of foreign policy in the Lee Myung-bak era by surveying the activities of the Presidential Transition Committee.

On February 5, with the Presidential Transition Committee’s announcement of 5 key government objectives, 21 strategic policy goals, and 192 national policy tasks, the administrative directions of Lee Myung-bak’s new government began coming into focus. Under the five key objectives of a lively market economy, a country rich in talent, a global Korea, active welfare, and a government serving the people and based on business reports received from each of the government ministries, 21 strategic goals and 192 tasks have been adopted. These objectives are in most respects consistent with the president-elect’s campaign pledges, and the basic premises of his policymaking continue to place an emphasis on economic concerns and pragmatism.

Moreover, the Presidential Transition Committee, through its activities in the past month or so, has been making announcements in rapid succession, including proposals of bold deregulation policies for attracting domestic and international investment. It has also announced education system reforms, such as the implementation of classes taught in English, with the goal of developing local talent that will increase competitiveness at the international level. In addition, President-elect Lee has nominated the internationally renowned Han Seung-soo as the prime minister of the new government and made preliminary announcements regarding the expansion of “resource diplomacy.” All of these developments are consistent with the five key government objectives.

In regard to foreign policy, as represented by the government objective of a global Korea, the new administration has made the election campaign pledges of “Vision 3000: Denuclearization and Openness”1 and the “creative development of South Korea-US relations” its core tasks. However, the pledges have been supplemented in places, with such language as “the creation of a new structure for peace” being adopted for use in actual strategic policy goals.

Furthermore, at press conferences and on other occasions, President-elect Lee himself has begun to make statements that are deeper than those made during the presidential election period. For example, on February 1 this year, he indicated that decisions regarding the implementation of the agreements reached at the Second Inter-Korean Summit in October 2007 would be based on the four principles of progress on the North Korean nuclear issue, economic feasibility, financial capacity and value, and national consensus. And with regard to the South Korea-US alliance, Lee stated on February 13 that, “While conventional relations between South Korea and the United States have been maintained for some time, the formation of more forward-thinking South Korea-US relations is desirable for both nations.” He also made references to the need for a “new framework.”

However, the anticipated embodiment of these statements remains unclear. Foreign policy in the new government will not be up to speed until after the general election this April. Development of a proactive foreign policy will be difficult without gaining a majority in the general election. This is why so much weight is being put on Lee’s visits to the United States and Japan in April. Furthermore, Korean foreign policy will be greatly influenced by the circumstances of North Korea’s nuclear report and the course of events in the presidential election in the United States.

While many aspects of the new government remain unclear, one thing now apparent is that, in comparison to the Roh Moo-hyun administration, greater emphasis is being put on finding a resolution to the North Korean nuclear problem within the framework of international cooperation—especially the six-party talks and the South Korea-US alliance. The sending of top-level special envoys to the United States, Japan, China, and Russia was the first step in this effort, which President-elect Lee has continued to back up in his public statements. On February 1, for example, he asserted, “We will endeavor to mend the past ten years of South Korea-US relations. Relations with Japan can be improved.” He further stated, “We believe that if relations with the United States are strengthened, inter-Korean relations will advance as well. This is a fundamental change in thinking.”

Finally, with the new government in South Korea and the current Fukuda administration in Japan, there are expectations for a rapid improvement in South Korea-Japan relations. With Prime Minister Fukuda’s participation at the presidential inauguration ceremony, the holding of a Japan-South Korea summit, and the invitation of President-elect Lee Myung-bak to the Group of Eight Hokkaido Toyako Summit, it appears that there will be a resumption of shuttle diplomacy between the two heads of state. Interaction at the parliamentary level will most likely pick up steam after the general election in April. The resumption of South Korea-Japan free trade agreement negotiations, which have been suspended since November 2004, is also anticipated.

It is likely that Korea’s incoming government will apply its new pragmatism to Japan-oriented policymaking as well, and without doubt there will be a call for measures that connect to promoting Japanese investment in South Korea and reducing the trade deficit. There is a touch of unease, however, regarding the degree to which Japan can fulfill Korea’s expectations in an economic respect. But there continue to be many fields in which Japan and South Korea, with aspirations toward a global Korea, can work together. There will probably be inclusive discussions regarding cooperation in environment-related fields, and in the medium term, cooperative activity in fields relating to peace building may be realized as well. The administration of Lee Myung-bak, with its ambitions of advancement, is placing emphasis on expanding official development assistance and the reinforcement of peacekeeping operations.

With regard to the historical issues between South Korea and Japan, President-elect Lee has stated, “I do not want to talk about demanding apologies,” and that he would “prefer to leave such problems of history to Japan’s judgment and to keep on moving forward with eyes on the future.” The year 2008 is the sixtieth anniversary of the founding of South Korea, and 2010, two years from now, will mark the hundredth year after the beginning of Japan’s annexation of the Korean Peninsula. As the problems of history continue to rise to the surface, it is hoped that care is taken at the leadership level in South Korea and Japan and that the momentum of improving relations between South Korea and Japan is not lost.

(This article was written before the presidential inauguration.)

One of the initiatives outlined in Lee Myung-bak’s election campaign, “Vision 3000: Denuclearization and Openness” stipulates that the implementation of North Korean denuclearization within the framework of the six-party talks will be followed up with large-scale economic aid by South Korea for North Korean reforms and openness, thereby raising the per capita GDP in North Korea to the $3,000 level within a ten-year period. 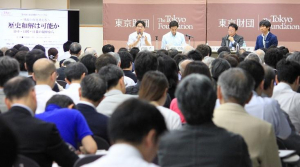