Large-scale renewable energy projects have triggered a backlash in some Japanese communities, but the city of Miyazu is partnering with business to build a new model for clean, decentralized energy in Japan.

Community-based renewable energy has emerged as a major force in the global shift away from fossil fuels, a trend that has accelerated since the Paris Agreement came into effect in November 2016. In Japan, local governments and stakeholders are declaring their support for community power in ever-growing numbers. They are motivated not just by the threat of climate change but also by local challenges, including demographic aging and depopulation. In the following, I examine one promising community-power initiative in the context of domestic and overseas trends.

In Japan, community-based renewable energy is attracting attention not only from the perspective of stemming climate change but also as a path to local energy security and economic revitalization. However, projects carried out under government programs to promote the use of clean energy have had mixed results at the local level. Large-scale solar energy projects in particular have raised concerns about the impact on the local living environment, landscape, and ecosystem, and several plans have had to be scrapped in the face of organized community opposition. Some local entities have even responded with legislative action; Nagano Prefecture, for example, has extended its statutory requirements for environmental impact assessments to large-scale solar facilities.

In addition to worries about the impact on the natural and living environment, local communities have complained that the typical renewable energy project contributes little to the community from an economic standpoint. As of March 2018, solar power—primarily from large-scale solar power plants—accounted for a full 81% of the installed capacity of facilities developed under the government’s FIT (feed-in tariff) program to promote renewable energy. Such solar parks are generally built and owned by big corporations, which bring in their own maintenance crews and contractors, limiting local job creation. Those outside businesses pocket the profits and pay their local corporate taxes to the municipalities and prefectures where they have their head offices.

The environmental and economic concerns of local stakeholders must be squarely addressed in order to put community power on a sustainable footing and continue the shift to renewables. This is something in which Germany has excelled, thanks in large part to the unique role of its municipal utilities, or Stadtwerke.

Stadtwerke are local public corporations that offer residents a variety of public services, from electricity, gas, and water supply to Internet connectivity and public transportation. Germany has roughly 1,400 of them. Although varying in size, scope, and purpose, they are all at least partly owned by the local municipal government, but they are structured and operated as independent, self-sustaining business organizations. In this respect, the Stadtwerke resemble Japan’s third-sector corporations, but unlike those entities, they are typically active in more than one sector. They use the proceeds from profitable segments to subsidize other public services and thus keep the business as a whole on a sustainable footing.

Perhaps the biggest difference between Germany’s municipal utilities and Japan’s third-sector corporations, however, is that Stadtwerke enjoy broad public support for the economic and social value that they offer the community. This is the main reason that they have continued to flourish as energy providers despite competition from big power companies in a deregulated market.

Altogether, Germany’s municipal utilities supply roughly 60% of the electricity sold on the retail market, and they generate about 20% of it. Stadtwerke Heidelberg, to take one example, is the chosen supplier for 84% of the city’s energy users, even though its rates can be 1%–2% higher than those of the big electric utilities. This speaks to the community’s support for the municipal utility’s contribution to society, from its role as a local employer to its efforts to reduce greenhouse gas emissions.

The German public’s broad-based acceptance of renewable energy stands in sharp contrast to the suspicion with which many Japanese communities regard such projects. The Stadtwerke have helped put renewable energy on a sustainable footing by clearly communicating how the community benefits from local solar or wind power projects. This has inspired a movement to establish “Japanese-style Stadtwerke,” municipal utilities that rely on clean energy. Unfortunately, even the most successful of these entities have thus far struggled to win local support and attract customers.

Meanwhile, in the city of Miyazu in northern Kyoto Prefecture, private corporate investors have worked closely with the city and its residents to develop a different sort of model that incorporates important lessons from the Stadtwerke.

In September 2017, Miyazu Solar Power Generation GK, a joint venture company formed by Omron Field Engineering, Kyocera, and Kaneshita Construction, announced the completion of a 4.9-megawatt solar power complex in Miyazu, Kyoto Prefecture. The complex, consisting of six solar farms, has enough capacity to meet the energy needs of some 1,100 local homes and the potential to reduce carbon emissions by 2,896 tons annually. But just as important is the fact that the local residents and municipal government cooperated actively in the development of these solar facilities with the aim of addressing specific challenges facing the community.

One is the challenge of climate change. Global warming is not an abstract issue for the coastal city of Miyazu. Rising sea levels threaten a precious local tourism resource, Amanohashidate—the long, pine-covered sandbar regarded as one of Japan’s top three scenic spots. This circumstance helps explain why the city has formally committed itself to minimizing its carbon footprint by making optimum use of renewable energy.

A more immediate challenge facing Miyazu, however, was the management of abandoned land, a problem plaguing many communities across Japan owing to depopulation and urban migration. In the city’s Yura district, large tracts of farmland had been left unused and untended for so long that they were covered in scrub and thickets and had become home to wild animals that sometimes ventured into nearby residential neighborhoods.

It was with such global and local issues in mind that Omron Field Engineering (OFE) teamed with the Miyazu municipal government in 2015 to conduct a feasibility study for a community power project in the Yura district. From this study emerged a plan to generate clean energy while addressing the local problem of abandoned plots through installation of solar panels on unused land in the city Miyazu.

In its role of project coordinator, OFE presented a detailed business plan to community groups and was able to enlist their help in identifying the owners of more than 100 of plots of unused farmland. To ensure that the community benefited economically from the project, two local firms were tapped as business partners: Kaneshita Construction would prepare the installation sites, and Kyocera (headquartered in the city of Kyoto) would supply the photovoltaic equipment, while OFE would handle the installation and maintenance. In addition, it was agreed that a portion of the business profits would be donated to the residents’ associations to be used for community revitalization. In 2016, the three firms established a joint venture company (a limited liability “special purpose company,” or SPC) to implement the plan. Representatives from OFE and Kaneshita Construction held community meetings, concluded the necessary contracts with landowners, and set to work on site preparation and installation. 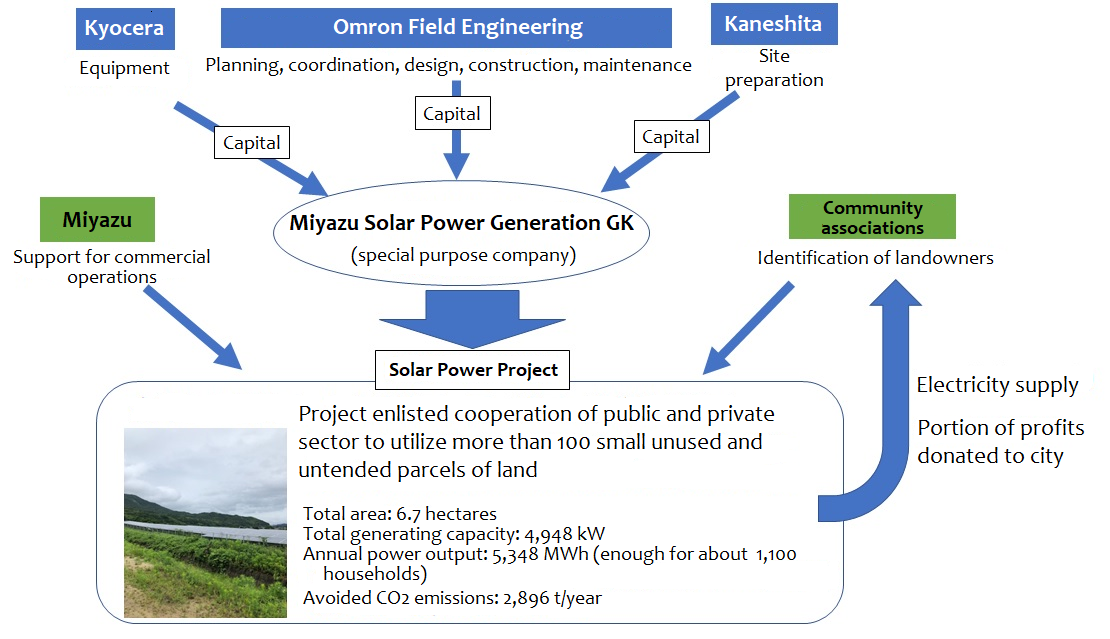 The project can be considered a success in the sense that it was implemented with the support and cooperation of the community and addresses local issues. It may also prove to be the first step toward an even more ambitious undertaking by the city of Miyazu, which is hoping to expand local production of renewable energy. While the electricity generated is currently fed into the grid through the FIT program, the project may eventually enter the retail market, selling power directly to users, with a focus on local residents.

How, then, does Miyazu’s solar energy enterprise compare with the German Stadtwerke? Unlike the Stadtwerke, the Miyazu solar complex is privately owned. However, two of the investors are locally based, and the city of Miyazu cooperated actively, committing itself to the program’s long-term success. Like the Stadtwerke, the program is designed to generate economic benefits for the community through the utilization of abandoned farmland and the diversion of a portion of the profits to support community revitalization activities by the residents’ association. Most important, it won the understanding, support, and cooperation of local residents by clearly communicating how it proposed to address local problems and return business profits to the community.

Currently, the partnership launched in Miyazu focuses exclusively on generation of solar energy, but given the residents’ positive attitude toward the program, the city of Miyazu is optimistic about its prospects for developing a viable business as a retail energy provider. In that case, it may well end up using the proceeds to support other municipal services in a manner akin to the internal subsidization employed by Germany’s municipal multi-utilities.

Many of the renewable energy projects being carried out in Japan today claim to be providing solutions to local problems. In all too many cases, however, investors arrive on the scene with their own prefabricated business plans and only solicit community input as an afterthought. What distinguishes the Miyazu initiative is the fact that the project’s planners started out by identifying a problem facing the area and developed a plan that addressed that problem with the active collaboration of area residents.

Climate change is a global threat, but it is not the only reason to switch to renewable energy. With community power assuming an ever-growing role in the shift away from fossil fuels, Miyazu demonstrates one way in which the public and private sectors can team up to tackle local challenges.

Electric Cars and the Drive for Sustainable Energy