Ke Long warns that Beijing’s bid to rein in Hong Kong with new security legislation will backfire by robbing the city of the very attributes that make it a thriving center for international finance and commerce.

In 1997, the British colony of Hong Kong reverted to Chinese sovereignty under a “one country, two systems” pact that was supposed to safeguard the liberties of the residents for the next 50 years. Today, just 23 years later, Hong Kong’s freedoms hang in the balance amid moves by Beijing to impose its own system of justice on the semi-autonomous territory.

What are the implications for Hong Kong’s status as Asia’s foremost center of international finance?

Roots of the “Hong Kong Problem”

Under British colonial rule, the people of Hong Kong could not choose their own leader democratically, but they did have the benefit of Western systems that upheld the rule of law and protected such basic liberties as freedom of expression, assembly, and religion, as well as private property rights under a capitalist system. Britain agreed to transfer sovereignty to the People’s Republic of China in 1997 on the basis of Beijing’s pledge not to tamper with those rights and systems for another 50 years.

This arrangement, which China dubbed “one country, two systems,” was duly enshrined in the 1997 Hong Kong Basic Law, which states that “the socialist system and policies shall not be practised in the Hong Kong Special Administrative Region, and the previous capitalist system and way of life shall remain unchanged for 50 years.” In other words, the capitalist system of Hong Kong, under which basic rights and freedoms and private property are protected by law, would exist alongside the socialist system of mainland China, where the law offers no such protection.

The Basic Law guarantees the territory legislative and judicial autonomy (even though it allows the Chinese government to impose its preferences in the choice of a chief executive). However, this autonomy has come under assault in recent years. In the fall of 2015, the owners and staff of a Hong Kong bookshop were seized by Chinese authorities, transported to the mainland, and held in custody without due process. Although the precise reasons for their abduction were never revealed, it cannot have been mere coincidence that the small bookshop specialized in publications purporting to reveal scandalous behavior by Communist Party officials.

Regardless of the accuracy of those publications, the seizure and detainment of Hong Kong citizens by mainland Chinese police authorities was a blatant violation of Hong Kong’s judicial independence, and the incident triggered protests by student activists.

In 2019, responding to pressure from Beijing, the Hong Kong government introduced an extradition bill that would allow local authorities to detain and transfer persons accused of crimes in mainland China. The plan sparked massive demonstrations by students and other citizens who feared that Hong Kong was ceding its own legal and judicial independence. At their peak, the protests drew some 1.7 million participants.

The chief executive of Hong Kong ultimately succumbed to public pressure and withdrew the bill, but by then the government had lost the confidence of the citizens. In the District Council (local) elections held that November, pro-Beijing parties suffered a major setback, and pro-democracy forces won more than 80% of the council seats.

Why did the people of this former British colony deliver such a stinging rebuke to the Chinese government? The reason, simply put, is that they, like most people, prefer to be free. This is also why so many Chinese citizens have found the means, legal or illegal, to migrate from the mainland to Hong Kong over the years (since well before the 1997 reversion).

The real question we should be asking is not why the people of Hong Kong prefer their freedom but why the Chinese government feels obliged to curtail it. And the basic reason is that Beijing fears Hong Kong will become the center of a much broader pro-democracy movement.

Back around the time of Hong Kong’s reversion, there was a fairly broad consensus among experts that the two-system solution could not last indefinitely. What they differed on was whether China would change Hong Kong or Hong Kong would change China. From a realistic viewpoint, it scarcely seems credible that tiny Hong Kong might spur the economic and political transformation of the biggest country on earth. And yet this appears to be one of Beijing’s worst nightmares. This is why Beijing has moved to change Hong Kong by replacing “one country, two systems” with “one country, one system.”

Since the 2019 local elections, which ended in such impressive gains for the pro-democracy camp, Beijing’s most immediate concern has been the upcoming election for the Legislative Council of Hong Kong, scheduled for September 2020. If pro-democracy forces were to secure a majority of seats in the Legislative Council, as seemed likely, they might be able to legislate the democratic election of the chief executive by universal suffrage. From Beijing’s viewpoint, the best way to avert such an outcome was to pass a law under which it could disqualify the pro-democracy candidates. What it came up with was the national security law for Hong Kong.

Although the details of the legislation have yet to be released, it appears that it would establish a legal basis for the criminal prosecution of any individuals or groups whose activities in Hong Kong are deemed a threat to national security, as defined and interpreted by the Chinese government. It would also give Beijing a measure of authority in the handling of such cases. As the citizens of Hong Kong see it, such intervention in the territory’s laws and judicial system would mean the end of “one country, two systems.”

The High Cost of Intervention

From the standpoint of the Chinese government, the law’s most obvious merit is that it would permit Beijing to crack down on Hong Kong’s protests and halt the momentum of the pro-democracy movement. But such gains would come at a high price indeed.

To begin with, implementation of the new security legislation could be expected to precipitate the flight of human capital. British Prime Minister Boris Johnson has already pledged to grant 2.9 million Hong Kong residents a pathway to British citizenship if the law is enacted, and the United States, Australia, New Zealand, and Canada have all expressed a willingness to throw open their doors to immigration from Hong Kong.

In Japan as well, Prime Minister Shinzo Abe and other leaders of the ruling Liberal Democratic Party have indicated that they are actively looking at options for encouraging immigration of human resources “in technical and specialized fields” from Hong Kong. Such a flight of human capital would drain Hong Kong of its most precious resource.

China would also lose the access that Hong Kong affords as a gateway between China and the international community. If Hong Kong’s system is merged into mainland China’s, Hong Kong will no longer be Hong Kong, and it will cease to function as a gateway.

Furthermore, Hong Kong is sure to lose its status as Asia’s main center for international finance. After all, a free market, an independent judiciary, and English as a working language are three basic prerequisites for any financial hub. The Hong Kong national security law would compromise the independence of the territory’s justice system and ultimately destroy its appeal as a laissez-faire economy. Human capital flight is likely to erode the status of English as the city’s working language. Singapore would quickly emerge as a more attractive alternative.

Moreover, if Washington follows up on its threat to suspend the preferential tariffs and other special treatment, the port of Hong Kong will lose its status as the world’s transshipment hub as well.

Hong Kong’s most affluent residents will flee the country, taking their assets with them. Major financial players—including asset management firms, funds, and individual investors—will relocate and transfer their assets to Singapore. This will place strong downward pressure on the Hong Kong dollar, currently pegged at 7.8 to the US dollar. Despite all efforts by the Hong Kong Monetary Authority to prop up the currency, the US dollar peg will ultimately be impossible to sustain.

The “Hong Kong problem” (as China calls it) is rooted not in economic inequality but in the clash of values and ideology. The groundswell of anti-government sentiment in Hong Kong is fueled by a deep antipathy toward the socialist system of mainland China, and it shows no signs of abating.

Now Beijing is moving to crack down, calling the Hong Kong problem an “internal affair” in which other countries have no right to interfere. But international society is in no mood to indulge the Chinese government—particularly not now, after Beijing’s obdurate refusal to take any responsibility for the spread of the coronavirus. Chinese President Xi Jinping is on the horns of a dilemma as the democracies of the world join forces in defense of a free Hong Kong. 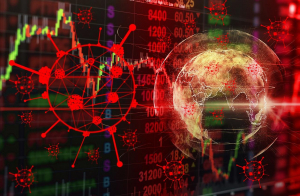 Japanese Multinationals and the Post-COVID Challenge

Japanese Multinationals and the Post-COVID Challenge