Toward a Safety Net for Independent Workers

The COVID-19 crisis has highlighted the vast security gap between payroll employees and the swelling ranks of freelance and gig workers. Research Director Shigeki Morinobu discusses the need for a more comprehensive security net to distribute the risks of nontraditional work styles in this era of economic uncertainty.

The COVID-19 crisis has thrown into sharp relief the precarious existence of many freelancers and other nominally independent workers in today’s gig economy. At the same time, the government’s Subsidy Program for Sustaining Businesses, instituted in part to provide relief for nonregular workers, has highlighted the challenges of properly classifying and accurately calculating such income. Drawing from the lessons of that program, I would like to make the case for a “work-style–neutral” safety net and offer some guiding principles for policy makers.

Lessons from the COVID-19 Crisis

As part of its response to the economic impact of COVID-19, the government instituted the Subsidy Program for Sustaining Businesses, which pays cash subsidies to small and medium-sized companies, sole proprietors, and independent contractors (including freelance workers) experiencing a 50% year-on-year drop in monthly revenue as a result of the coronavirus. Small- and medium-sized businesses can receive up to ¥2 million, while sole proprietors and independent contractors are entitled to a maximum of ¥1 million.

Initially, eligibility was to be determined on the basis of the change in “business income” reported by individuals on their income tax return. However, the criteria had to be altered when it became clear that many freelancers and gig workers report their revenue as “employment income” or “miscellaneous income.” This finding provided a stark reminder of the challenge Japanese tax authorities face in keeping tabs on individual income in an age of increasingly diverse and nontraditional employment. It is a problem that will need to be addressed if we are to design an efficient and equitable safety net for gig workers and freelancers.

The Status of Freelance Workers

Freelance work has grown increasingly common in recent years, as modes of employment have diversified with the government’s encouragement. Freelancing has the great merit of flexibility, allowing individuals to choose when, where, and how they will work. The development of online platforms that link freelancers to customers has given a considerable boost to this trend and powered a sharp increase in the number of “gig workers,” people who piece together a living from short-term jobs.

Japan’s labor laws offer no official definition of freelance workers, but a May 2020 report on a government survey of freelancers defines them as “self-employed persons, excepting those engaged in agriculture or forestry, who do not employ others or own a physical store.”

Judging from the results of the survey, the income of freelance workers can be quite volatile. Annual income is not particularly high on average, but for those who are competitive, freelance work can be quite profitable. The distribution of income brackets is shown in the figure below. 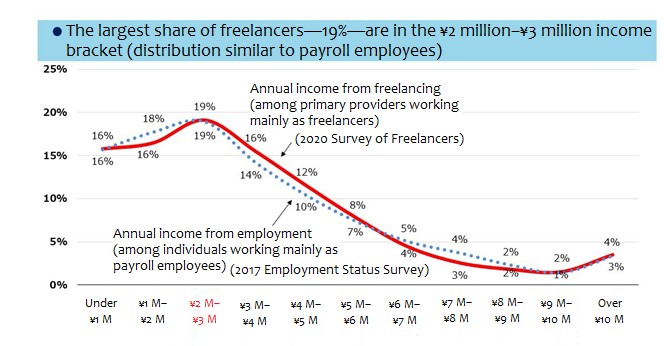 Notes: Annual incomes for freelancers were compiled from answers to the question “Please tell us your most recent annual income as a freelancer” (multiple choice, single answer); n=2,129. “Primary provider” is defined as the highest income earner in a household. “Annual income” is defined as net business income, that is, gross revenue less business expenses and before taxes and social insurance contributions.

Source: “Furiransu no jittai chosa no kekka” (Report on the Survey of Freelancers), Headquarters for Economic Revitalization, Prime Minister’s Office, May 2020, https://www.kantei.go.jp/jp/singi/keizaisaisei/miraitoshikaigi/suishinkaigo2018/koyou/report.pdf

One of the key differences between payroll employees on the one hand and so-called self-employed workers on the other is that the latter are largely responsible for their own economic security.

In Japan, all payroll employees are covered by Workers’ Accident Compensation Insurance, which guarantees medical compensation and lost wages to any worker suffering a work-related illness or injury. Employers are required to pay the full cost of such insurance for all their payroll employees. Independent contractors receive no such compensation unless they are construction workers able to secure “special enrollment” arrangements.

Payroll employees are covered by Employment Insurance—splitting the premiums with their employers—which guarantees an allowance to those who lose their jobs or have their hours cut back. Freelancers and independent contractors receive no such compensation, partly because “unemployment” is difficult to define when one has no fixed employer or place of employment. Moreover, while payroll workers who take maternity leave continue to receive a percentage of their pay via Employees’ Health Insurance, freelancers, who are covered by National Health Insurance, may or may not receive such benefits, depending on the municipality.

These discrepancies are especially troubling because so many of those currently classified as independent contractors perform their work under the direction and control of the hiring entity, much as payroll employees do. Why, one may ask, should they be treated so differently when it comes to safety-net benefits?

The basic rationale for Japan’s two-tiered approach is that independent contractors make the decision to go into business for themselves with an awareness of the risks involved. But the coronavirus crisis has vividly demonstrated the limits to the risks one can reasonably expect individuals to manage on their own. The time has come to abandon this antiquated two-tiered system and build a work-style-neutral safety net that distributes the risks and costs more equitably.

Keeping in mind the lessons of the Subsidy Program for Sustaining Businesses, I would suggest pursuing two policy options. The first involves extending hiring entities’ safety-net obligations from their payroll employees to the gig workers and other qualifying freelancers with whom they contract. The second deals with the state’s obligations.

The first option would require companies and intermediary platforms above a certain size to treat the freelancers with whom they contract as payroll employees for purposes of unemployment and workers’ compensation. This option would extend the safety net to individuals working under a variety of nontraditional models, including that used by Uber Eats, the online food ordering and delivery platform.

The “delivery partners” (drivers or couriers) who work with Uber Eats are not classified as Uber Eats employees. Rather, they use the platform as a go-between to contract with a participating restaurant for each order they fill. Under current Japanese labor law, such couriers are classified as independent contractors, since they are presumably free to take or refuse any given job. If you asked the couriers, however, I suspect many of them would say that they, just like payroll employees, are obliged to submit to the company’s direction and control if they want to make a living. In fact, the same probably applies to the majority of gig workers and freelancers who use online platforms to connect with customers or clients.

There are compelling arguments for requiring large businesses to pay the costs of a safety net for these workers, since the companies save on social insurance premiums, as well as other benefits, by using gig workers and freelancers in place of payroll employees. Indeed, it is clear that some companies opt for such contractual relationships precisely for that reason. Some would even characterize the business model developed by Uber Eats and similar platforms as a business strategy designed to exploit the weaknesses and loopholes of existing labor laws.

From this perspective, it is not unreasonable to ask big companies that profit from such practices to fulfill their responsibility to society by assuming the same safety-net burden imposed on traditional employers. At the same time, the scope of such obligations must be established with care so that it does not narrow opportunities for those who prefer freelancing to traditional employment.

In the United States and Canada, efforts to hold corporations responsible for the security of those who provide them with labor have focused mainly on legal classification issues. There have been several major court rulings favoring the treatment of gig workers as employees, and one such ruling led to California Assembly Bill 5, which took effect in January 2020. AB-5 assigns the hiring entity the burden of proof regarding a worker’s status as an independent contractor, while establishing strict criteria that, if applied, will end up reclassifying many as employees. There have also been calls for the creation of a new category of “independent worker”—something between a payroll employee and an independent contractor—to ensure that today’s freelancers and gig workers have an adequate safety net. Policymakers in Japan should keep a close watch on these developments.

The second option, as mentioned above, is to create a system whereby the state would share some of the business risk borne by independent contractors and others working outside the traditional employment structure. One possible policy tool, already in use in many Western countries, is a refundable tax credit.

The concept of a refundable tax credit for low-income working people is widely attributed to US economist Milton Friedman, who advocated a “negative income tax” on the grounds that those who pay their fair share in taxes when they are earning enough to owe income tax should be entitled to a refund if their income falls below the threshold due to circumstances beyond their control.

The underlying principle here is not so different from that which allows Japanese companies to apply one year’s business losses to another year’s tax return and receive a refund as a result. It is a way for the government (meaning the taxpayers) to share the risks of volatile business conditions. Similarly, independent contractors and sole proprietors who use the “blue return” can carry over losses for up to three years.

Under the US Earned Income Tax Credit, people whose annual income falls below a certain level even when they work full-time are eligible for a cash grant in the form of a refundable tax credit to ensure that they remain above the poverty line (one-half of the median income). The existence of such systems is one of the reasons Western governments were able to distribute emergency cash benefits so quickly when the COVID-19 crisis hit. A refundable tax credit of this sort is particularly relevant to freelancers, whose biggest worry is the lack of a steady income.

Etsy, the US-based online marketplace for craft items and vintage goods, has compiled a set of proposals titled Economic Security for the Gig Economy, which I believe provides a useful reference. Etsy’s proposal can be summed up as follows.

These proposals are predicated on the existence of a system that allows tax authorities to keep tabs on each individual’s income, benefits, and taxes. In Japan, we must begin by building such a mechanism, making full use of the My Number taxpayer identification system to ensure accurate collection and collation of individual income and financial- account data. I plan to address this issue in a future article.

The problem of economic insecurity among Japan’s gig workers and freelancers has become more pressing than ever amid the uncertainties of the coronavirus pandemic. We need to begin tackling this challenge to secure a strong recovery and a healthy economy in the years ahead. 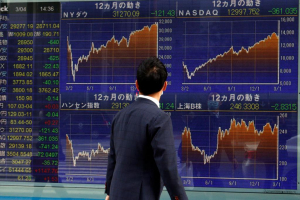