The COVID-19 pandemic has shown that Japan’s tax and social security systems are out of sync with new, alternative workstyles. Economist Eiji Tajika calls for a concerted government drive to adapt to a new era by digitalizing tax administration and unifying the pension system.

In the 1960s, government policymakers designed a public pension and national health insurance system built around two categories of income earners. On the one hand were “full-time employees,” represented by the nation’s army of loyal, hardworking “salarymen.” On the other were the “self-employed persons,” typified by farmers, fishers, and the owners of small shops and factories. Taken together, these were the people who made the economy go.

A Mismatch between the System and New Workstyles

But workstyles began diversifying amid the economic stagnation and structural reforms of the 1990s, and that trend has accelerated rapidly with the advent of the Internet and crowdworking platforms.

Table 1 offers an overview of Japan’s diversifying workstyles, viewed within the framework of our current tax and social security systems. Reflecting existing income tax categories, the table is divided between self-employed persons (S) on the left and employees (E) on the right. In the outer columns are the traditional workstyles representative of those two categories: the sole proprietor (S-1) on the far left and the full-time corporate “salaryman” (E-1) on the far right. In the inner columns we see today’s increasingly common nontraditional workstyles. 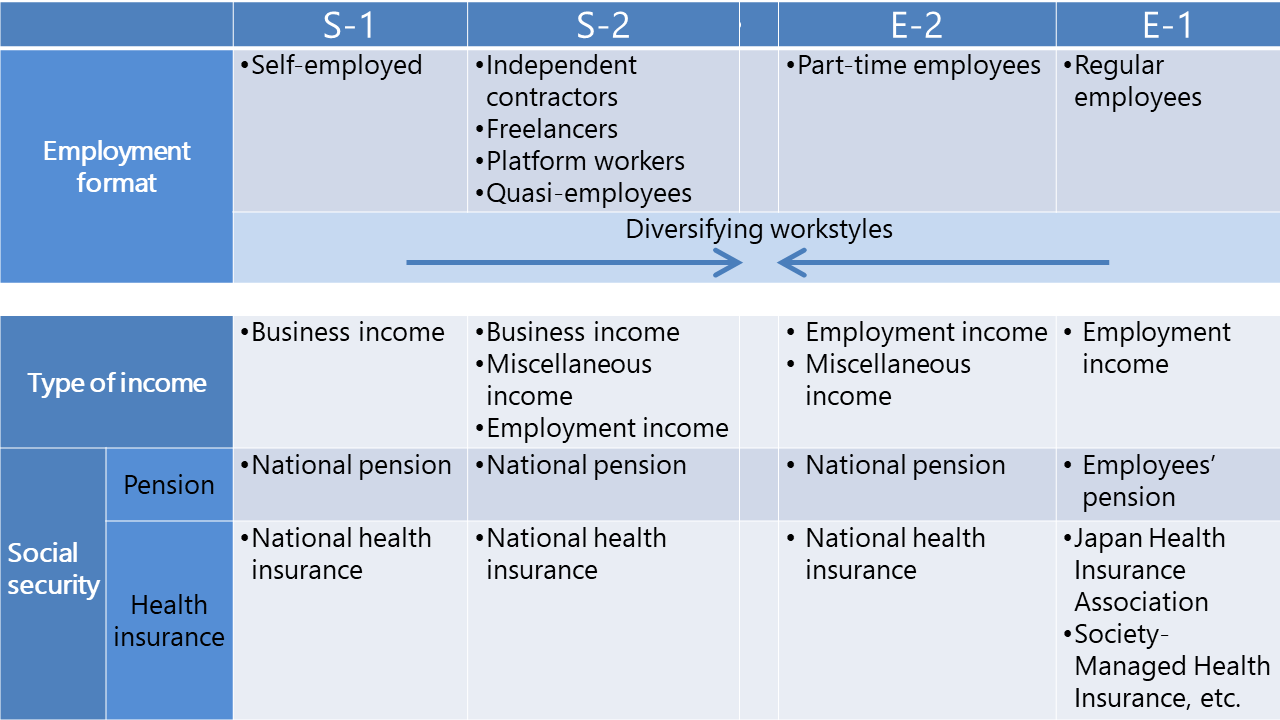 Diversification began as nonregular employees began performing work previously done by permanent, full-time “salarymen.” Nowadays, a substantial number of these nonregular employees work in two or more part-time jobs. It is generally assumed that the rise of telework in response to the COVID-19 pandemic has further accelerated this trend and contributed to a rise in the number of company employees who hold multiple jobs.

Even greater diversity is seen among the self-employed. Today more people than ever earn their living as freelancers or independent contractors, using their specialized skills or knowledge to provide services directly to other businesses on a contract basis. Another rapidly growing workstyle is that of “gig workers” (platform workers) who conclude contracts online through platforms with clients and provide on-demand services in response to instructions given (called “quasi-employment”). Representative of this category are the couriers and drivers who rush about delivering meals, groceries, and other goods to people’s doorsteps, an increasingly common sight these days.

Amid all this diversification, however, Japan’s tax and social security systems have remained wedded to an outdated framework premised on the existence of two mutually exclusive modes of earning a living. The income tax, for example, continues to equate employment income with permanent employees and business income with virtually everyone else. This ignores the fact that many company workers today earn miscellaneous income in addition to employment income. It is also the source of massive confusion surrounding the income of so-called self-employed persons. Independent contractors who do essencially the same work as regular employees may report their earnings as business income, miscellaneous income, or even as employment income—as we learned when the government rolled out a program to assist independent contractors hit by the pandemic (see below). The existing income classifications are simply out of sync with today’s workstyles.

Where social security is concerned, Japan’s antiquated two-tiered structure essentially penalizes anyone who does not fit the definition of a salaryman. All permanent, regular employees are enrolled in employees’ pension insurance (kosei nenkin) and an employer-based health insurance scheme, both of which are partially supported by employer contributions. Everyone else, including contract employees and those working less than 20 hours a week for a given employer, must make do with the less advantageous national health insurance (kokumin hoken) and national pension (kokumin nenkin) schemes.

The disparity between retirement plans is particularly troubling. The kosei nenkin for regular employees consists of a “basic pension” and a compensation-tied component, paid for by contributions divided between the employee and the employer. The kokumin nenkin provides only the basic component. Enrollees pay a flat-rate monthly premium, currently set at ¥16,540, and those who contribute continuously from age 20 to 60 are entitled to the maximum benefit, presently about ¥65,000 a month.

The original rationale for denying an income-tied component to everyone but “salarymen” was doubtless the administrative challenge of correctly calculating their earnings. But that was 60 years ago. Six decades of inertia have left Japan with an old-age pension system grossly inadequate to its citizens’ needs.

Bugs in the COVID Relief System

The stresses of the COVID-19 pandemic have accentuated the flaws in Japan’s two-tiered tax and social security systems. Thanks to the mismatch between those systems and the changing structure of the labor market, the government has had to modify its emergency relief programs to ensure that assistance reaches the people who need it (see Table 2). 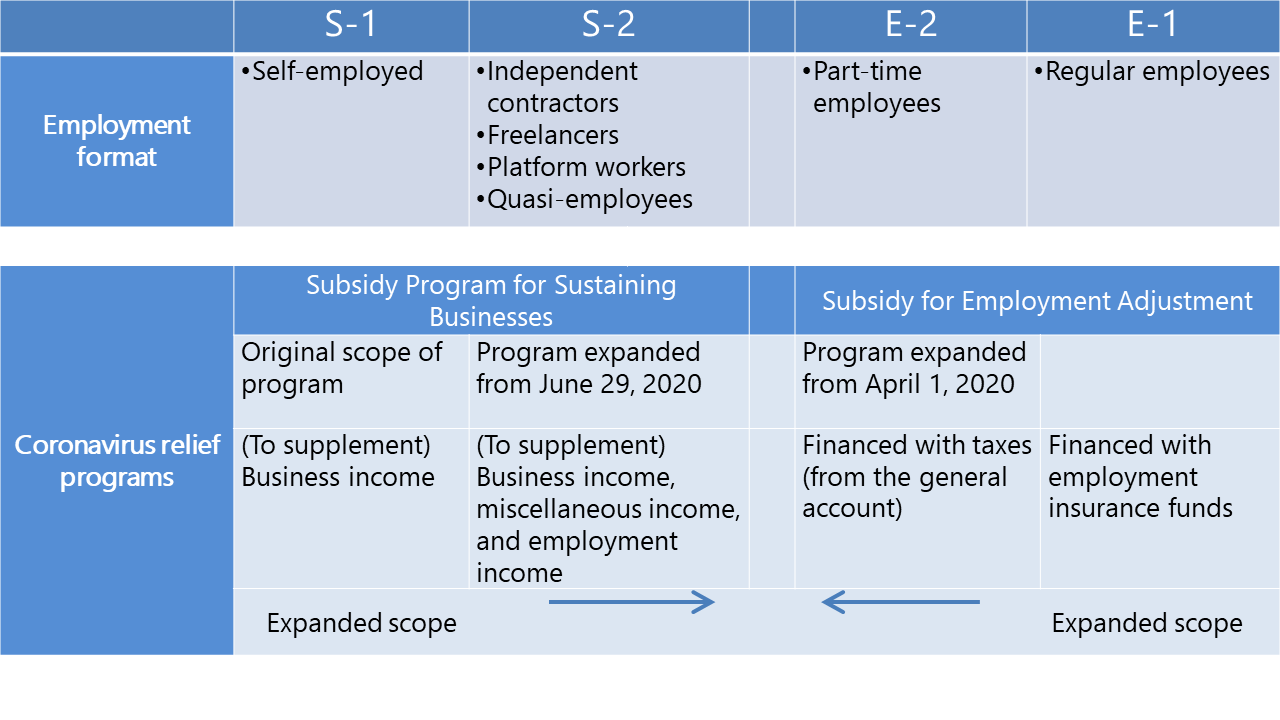 The two pillars of the government’s coronavirus economic relief effort are the Subsidy for Employment Adjustment and the Subsidy Program for Sustaining Businesses. The Employment Adjustment Subsidy is a system that helps companies keep people on the payroll by partially subsidizing the leave allowance they are required to pay to furloughed employees. But because it was designed to supplement funds from employment insurance, it did not initially apply to the many part-time workers who are not enrolled in that plan. To meet their needs, the government had to insert a separate provision to compensate such workers with taxpayer money (from the general account).

The Subsidy Program for Sustaining Businesses offers a one-time cash benefit to small companies and independent contractors whose earnings have fallen sharply as a result of the epidemic. In a pamphlet introducing the system, the Ministry of Economy, Trade, and Industry states that the program is designed to help pandemic-hit businesses and independent contractors in such industries as fishing, farming, manufacturing food services, retail, writing, and acting—all work traditionally associated with self-employment. No sooner was the program launched than it became clear that the basic criterion for eligibility, a drop in reported business income, excluded vast numbers of freelancers and platform workers (S-2) accustomed to reporting part or all of their earnings as miscellaneous or employment income. To accommodate those workers, the government had to improvise a quick fix that, in practice, expanded the program’s scope to every income category.

Similar problems dogged a system that subsidizes compensation to workers who had to take time off when their children’s schools were temporarily closed. The government changed its stance twice after mandating the closures, extending the benefits first to part-time employees and then to certain contract workers. In the program’s final form, the cap on daily benefits for employees, including part-timers, was still twice the maximum for the self-employed. Such discrimination on the basis of workstyle must have been difficult for the parents to stomach.

As we have seen, Japan’s tax and social security systems have failed to keep pace with our changing and diversifying labor market, and the COVID-19 pandemic has served to accentuate the discrepancies. In the following, I outline three key reforms needed to close this ever-growing gap.

Reform I: Digitalization of Tax Administration

The COVID-19 pandemic has highlighted the need for a means of quickly and accurately verifying people’s incomes in order to provide appropriate assistance to those in need. (The current system of classifying earnings as either employment, business, or miscellaneous income complicates this task unnecessarily, but that is a topic for a future article.)

Regular employees generally have no need to file tax returns; their income tax is withheld by the employer, with any under- or overpayment adjusted by the employer at year-end. In all other cases, however, taxpayers are required to report their own earnings. Administratively, it is a monumental task to verify the income of all such taxpayers and correctly identify and assist those in need. Digitalization of individuals’ income, tax, and social security information is vital to ensure administrative efficiency and transparency. This need is especially critical in the case of self-employed persons.

Digitalization of income reporting stands to benefit not only the government but also the growing number of taxpayers who face the onerous task of gathering tax documentation from each source of income in order to complete their tax returns. As workstyles and income sources diversify, filing an income tax return may become a universal requirement. Digitalization would make life simpler for everyone.

Japan lags far behind other countries in this regard. In many parts of the world, digitalization of tax administration has progressed to the point where taxpayers need do nothing but digitally sign off on electronic “pre-filled” tax returns sent them by their tax agency via the Internet. I have seen such setups at work in Taiwan and South Korea. Japan needs to get busy laying the groundwork for a comparable system.

As noted above, one of the major issues with Japan’s social security system is the distinctly privileged status of full-time, regular corporate employees. Simply put, the employees’ pension insurance scheme, to which employers must contribute their share, is reserved for regular employees (E1), while the national pension plan is for everyone else (S1, S2, and E2). What this means is that employers can save on pension contributions by hiring nonregular and contract workers instead of permanent, full-time employees, knowing that the national pension will cover anyone not enrolled in the kosei nenkin. Unfortunately, as noted above, retirees can expect no more from the national pension than about ¥65,000 a month. Even granting that public pensions are not intended to cover all the costs of post-retirement living, this is a grossly inadequate benefit.

The solution is to loosen the requirements for enrollment in the kosei nenkin and allow everyone to participate, regardless of their workstyle. Such a reform will not be painless; it will place an additional burden on enrollees, employers, and the government. But we have only gotten by on the cheap this long by stubbornly ignoring the inadequacies of the current system.[1]

An increase in social insurance premiums is the unavoidable cost of the reforms we need in order to create a fair and adequate social security system. The added cost must be shared by all of the system’s participants. It is already a heavy burden—many people in Japan pay more in social insurance premiums than they do in taxes—and it impacts low income earners disproportionately.

The only rational way to adjust and redistribute the costs of social security is to do so on the basis of the combined burden of taxes and social insurance premiums, instead of treating the two separately as we have until now. The first requirement for this integrated approach is digitalization of tax administration to ensure complete and accurate reporting of income. Once that requirement is met, we can ask each household to shoulder a combined burden commensurate with its income.

Where low-income households are concerned, this may require a downward adjustment, but that should be accomplished by reducing taxes, not premiums. There are two reasons for this. First, as the basic source of funding for the nation’s public pension and healthcare systems, social insurance premiums are difficult to cut. Second, an individual’s income tax burden can be easily adjusted in response to changing circumstances, such as through a system of refundable income tax credits.

The next step is total integration of the tax and social security burden via the establishment of a social insurance tax to replace premiums. Among other things, this would eliminate any incentive to keep working hours under a certain minimum in order to avoid payment of premiums. It is a reform that deserves serious and prompt attention, alongside digitalization of tax administration. 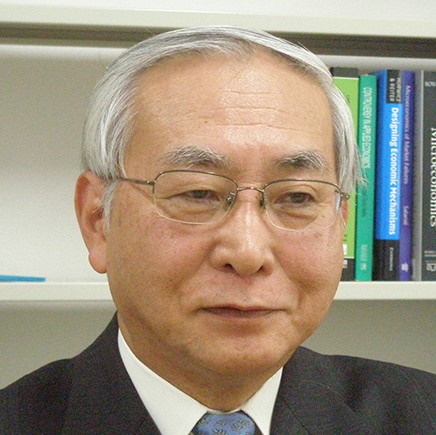 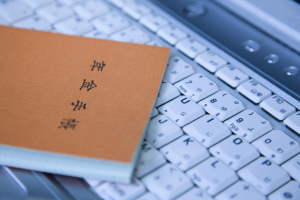