Pathways toward Carbon Neutrality in Japan: Insights from Energy Modeling and Analysis

On October 26, less than six weeks after taking office, Prime Minister Yoshihide Suga made a splash by committing Japan to the goal of carbon neutrality by 2050. Postdoctoral Fellow Kota Sugimoto reviews the latest quantitative research for insights into how that ambitious target might be achieved.

In a policy speech on October 26, 2020, Prime Minister Yoshihide Suga announced the ambitious goal of reducing Japan’s net greenhouse gas emissions to zero by 2050. The feasibility of the previous 2050 target, an 80% reduction in emissions, had been viewed with considerable skepticism. Now the bar has been raised even higher.

Carbon dioxide accounts for the bulk of GHG emissions, and since Japan’s CO2 emissions stood at about 1.3 billion tons in fiscal 2013, an 80% reduction would amount to a cut of about 1.04 billion tons. As seen in Figure 1, Japan’s CO2 emissions peaked in 2013 and have been falling ever since. However, considerably sharper annual reductions would be required just to reach the 80% target, let alone Suga’s net-zero goal. How might such huge cuts be achieved? 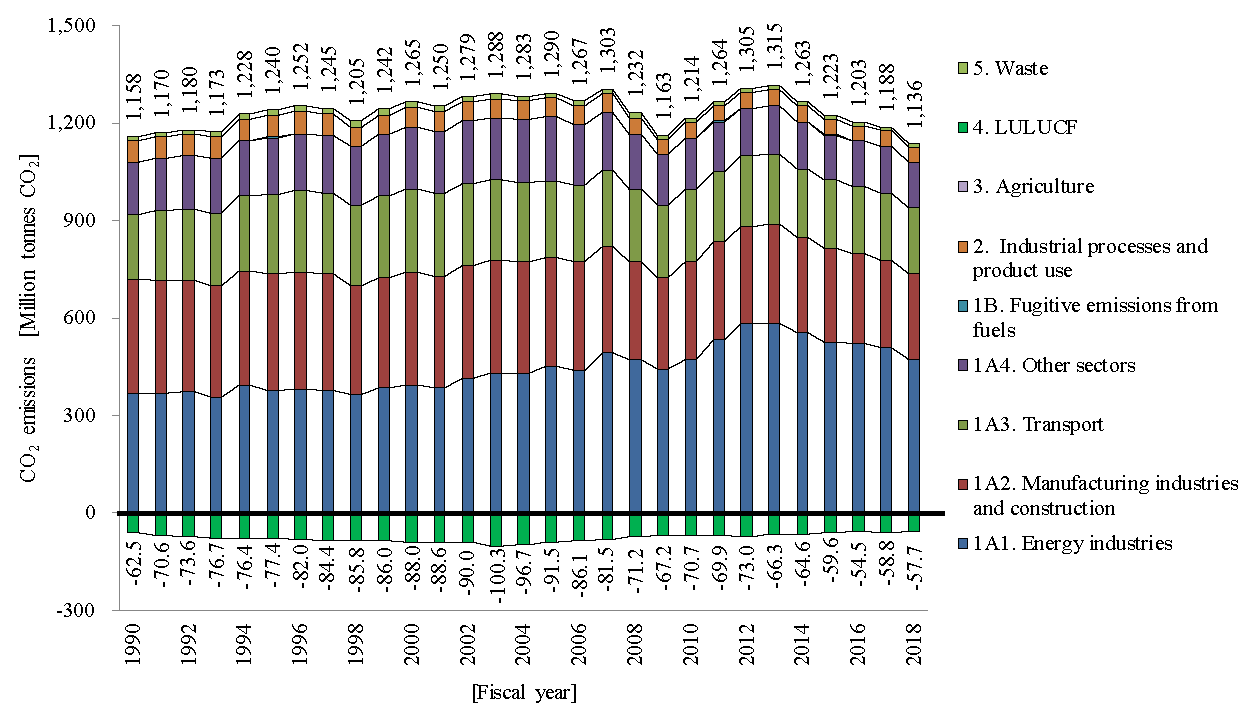 A number of studies have been undertaken in recent years to address this question through quantitative analysis. Most use energy and economic modeling approaches to identify the most feasible energy mixes or estimate the impact on gross domestic product. In the following, I offer a concise overview of these studies and their findings with an eye to assessing the policy options available to Japan from a power system engineering and economic standpoint.

A major study carried out by Masahiro Sugiyama and other researchers in Japan (2019) sought to identify the cost-optimum energy mix for meeting the 80% reduction target using six different energy-economic models. The models all yielded different results, but taken together, the analyses support a mix consisting of roughly 50% renewable energy and 30% “zero-emission thermal power”, with nuclear power making up the remainder.

Zero-emission thermal power refers to energy technologies that involve the combustion of fuels yet eliminate CO2 emissions. The two basic alternatives are (1) carbon capture and storage (CCS) technology to recover the CO2 produced and store it deep underground, and (2) hydrogen-fired power, which uses hydrogen gas fuel produced with the aid of renewable energy, resulting in virtually no net carbon emissions. The hydrogen fuel might be produced domestically or, if it proved more economical, imported from a country like Australia. The category of “Other” in Figure 2, indicated by dark blue, consists primarily of imported hydrogen fuel. 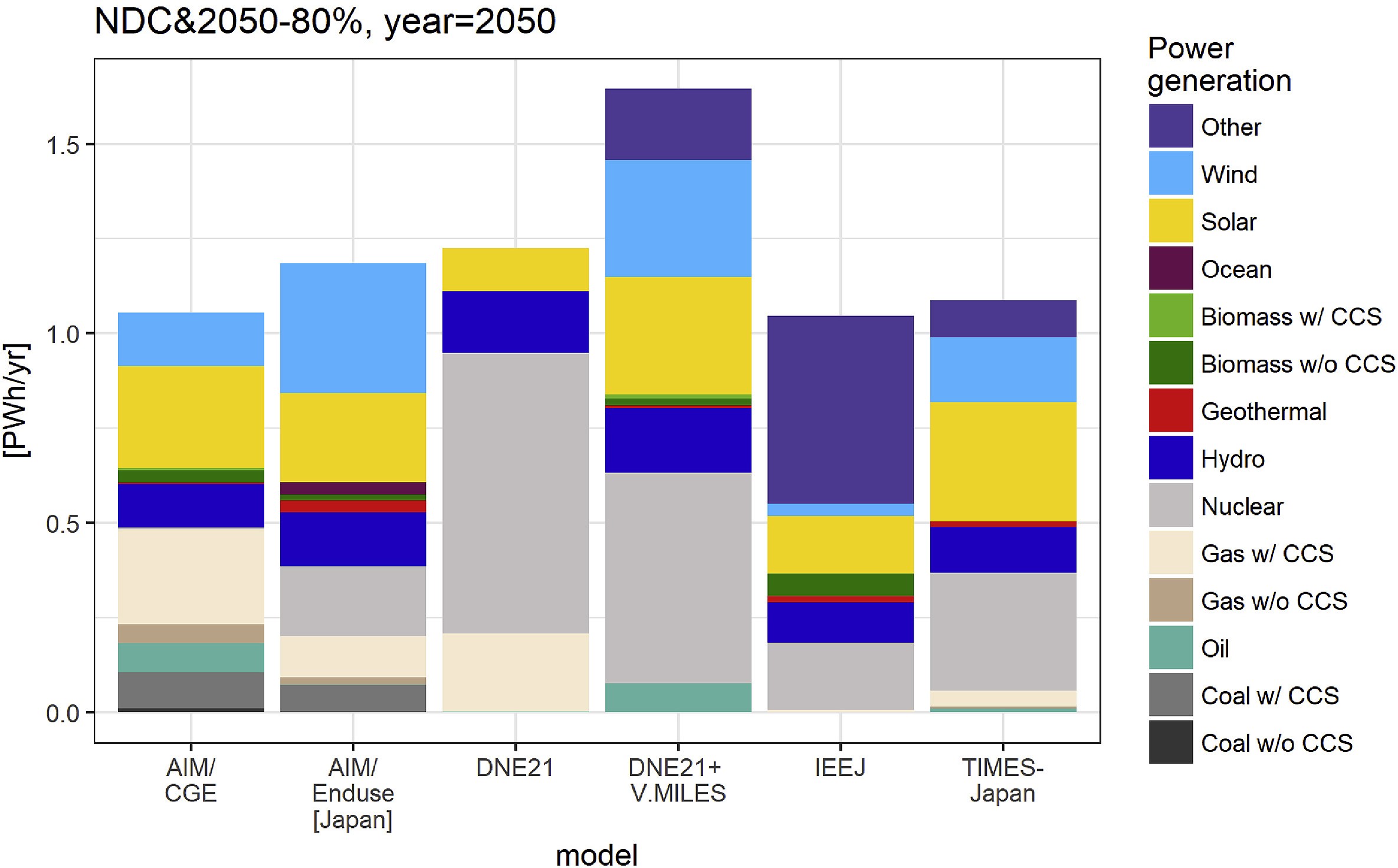 Note: For an explanation of the six models used, see Sugiyama et al. 2019.

With regard to the level of carbon pricing (a charge or tax on carbon emissions) needed to achieve the 80% target, Sugiyama and his team arrived at values ranging from US $273 per ton of CO2 to $7,730/tCO2, with a median value of $2,818/tCO2. Another study by Soocheol Lee, Unnada Chewpreecha, and Seung-Joon Park (2019), estimated that a carbon tax of $385/tCO2 (2010 US dollars) would be needed to achieve the target. On the other hand, researchers at the Japan Center for Economic Research (2019) have concluded that the target could be achieved with a carbon tax of just ¥10,000 (about US$95.00) providing digitalization of the economy progressed sufficiently.

As the foregoing suggests, different analyses yield distinctly different estimates of the carbon pricing required for abatement, but all of them agree on the need for some form of carbon pricing, starting at a low rate and gradually rising (in most cases to several hundred dollars per ton at the least). Carbon pricing is needed not only to deter emissions but also to facilitate innovation by giving industry an economic incentive to invest in low-carbon technologies, as persuasively argued by William Nordhaus, winner of the Nobel Prize in economics (see Nordhaus 2015).

Another point of consensus among these analyses is the need for a massive shift to electric vehicles, whether powered by batteries or fuel cells. Many scenarios call for electrification of other sectors as well. In any case, it is widely acknowledged that some combination of renewable energy, zero-emission thermal power, and nuclear energy will have to replace fossil fuels in many industrial processes, including the production of steel, cement, and fertilizer.

Is a Nuclear-Free Mix Feasible?

Studies such as those cited above have concluded that cutting Japan’s carbon emissions by 80% at a reasonable cost will necessitate continued dependence on nuclear energy, with nuclear power plants supplying between 10% and close to 30% of the nation’s electricity needs as late as 2050. However, some analyses suggest that large-scale deployment of zero-emission thermal power, coupled with a carbon tax or other carbon pricing mechanism, would allow Japan to achieve the target while reducing its dependence on nuclear energy to zero.

A study by Yuhji Matsuo and others (2018) at the Institute of Energy Economics agrees that phasing out nuclear power would add significantly to total energy system costs if it involves sharply increasing dependence on offshore wind power and battery storage without using zero-emission thermal power. However, the researchers also modeled the effect of large-scale use of hydrogen-fired power. Figures 3 and 4, reproduced from that study, show how energy mix and system costs change as dependence on hydrogen-fired power increases, with the right-hand sides of both graphs representing a nuclear-free scenario. The study concludes that, even without the use of nuclear energy, system costs can be kept down if hydrogen-fired power can be utilized at sufficient levels. 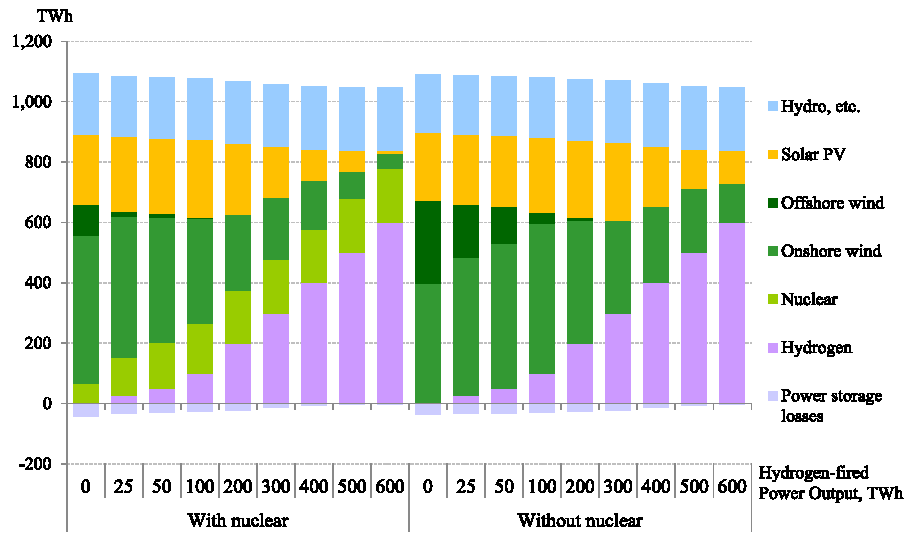 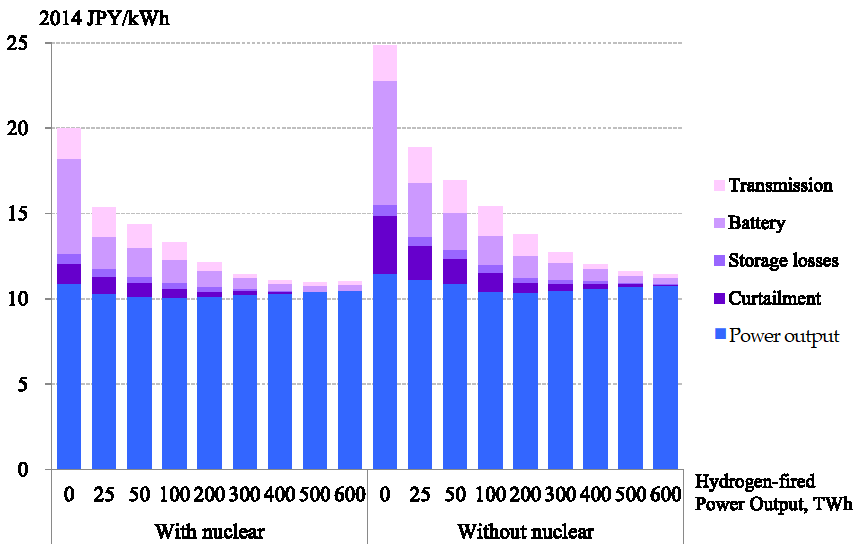 A recent study by Shin’ichiro Fujimori and others (2019) suggests that the impact of carbon pricing on consumption and gross domestic product could be significantly lower than previously estimated. Applying a new model, the researchers concluded that a carbon price gradually rising to $1,000/tCO2 in 2050 would result in GDP losses of about 0.8%, lower than the 2% to 8% that earlier studies estimated. In addition, their re-analysis of the data found that GDP loss would be nearly the same even if nuclear power dependence were reduced to zero. 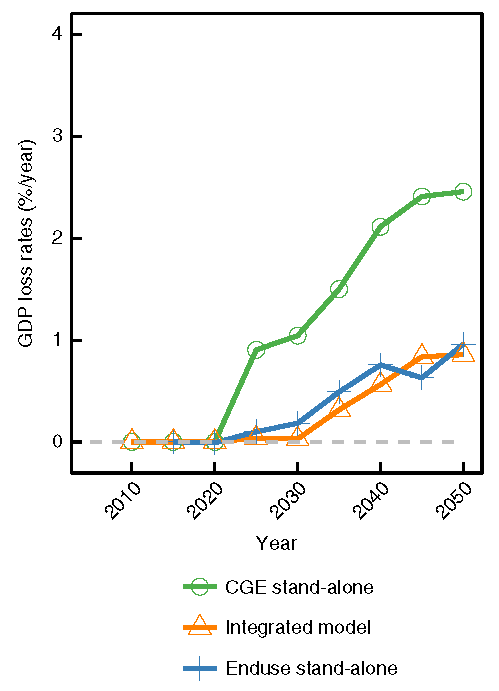 Lee, Chewpreecha, and Park (2019) analyzed a number of scenarios in which nuclear power dependance is gradually reduced to zero with the aid of a carbon tax of $385/tCO2 (in 2010 dollars), and 96% of the new tax’s revenues are used to finance a reduction in either the consumption tax, the income tax, or the burden of social insurance premiums. Using CCS instead of hydrogen-fired power as its zero-emission thermal power option, the researchers estimated that the boost to consumer spending and investment from the proposed tax cuts would result in an increase in GDP compared with the baseline scenario. Their study tested the concept of “green tax reform” as a means of saving the environment while promoting growth and improving welfare by using the proceeds from a carbon tax to finance income tax cuts. (In the words of Al Gore, “We should tax what we burn, not what we earn.”)

With regard to reliance on nuclear power, Takeo Kikkawa of the International University of Japan points out that any realistic analysis must take account of the operating life of a nuclear power plant, 40 years (Kikkawa 2020). Even granted a 20-year extension across the board, only 18 of the 33 plants now operating in Japan would still be operational in 2050; by 2060, that number would have dropped to five. Unless they are replaced (whether by construction of all-new facilities or by installation of new reactors), their contribution to an 80% cut in carbon emissions must necessarily be limited, notes Kikkawa.

It should be noted that the models used in these studies adopt different assumptions with regard to such key parameters as energy and electricity demand, the generation costs of various power sources, Japan’s economic and population growth, power generation capacity, the operating life of a nuclear power plant (40 or 60 years), and the price of fossil fuel imports. For example, Japan’s population in 2050 (based on projections released in 2017 by the National Institute of Population and Social Security Research) ranges from about 98 million to as much as 114 million, depending on the study. Since the models differ in respect to multiple assumptions, it becomes difficult to explain which assumptions cause the discrepancies in the estimation results.

The results of such modeling also depend on the uncertain technologies deemed feasible enough to incorporate into the future scenarios. For example, the studies cited above explicitly take into account the potential of carbon capture and storage technology but not that of carbon capture and utilization (also known as ), which seeks to turn the captured carbon into a resource. Neither do the models consider the potential impact of dynamic (real-time) pricing on electricity consumption.

A field experiment conducted by Takanori Ida, Makoto Tanaka, and Koichiro Ito (2017) demonstrated that it is possible to reduce peak consumption to some extent by adjusting electricity rates in real time to reflect changes in supply and demand. Aided by advanced digital technology, storage batteries, and the diffusion of electric cars, demand response is expected to play an increasingly important role in balancing demand and supply of electricity systems as well as achieving carbon mitigation going forward. Eventually, we are bound to see analyses that explicitly incorporate such innovative technologies and approaches in the future, since researchers are constantly refining their energy modeling.

In summary, I have reviewed recent studies analyzing scenarios for achieving 80% reduction of GHG emissions in Japan. The basic takeaway from this research is that achievement of that target will involve a massive shift to renewable energy, large-scale commercialization of zero-emission thermal power technology, and appropriate carbon pricing. The latest research also suggests that the economic impact could be smaller than previously estimated, and further, that it may be possible to achieve an 80% cut even while reducing dependence on nuclear power. However, more rigorous quantitative assessment of the trade-offs involved will be needed before we can plot the best course.

Ministry of the Environment. 2016. Overview of the Plan for Global Warming Countermeasures. https://www.env.go.jp/press/files/en/676.pdf. 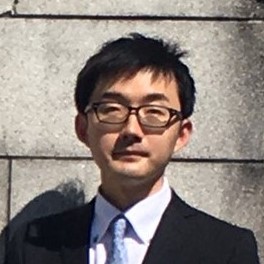 The Blue Economy: International Trends and the Situation in Japan

Policy Evaluation of Cross-Regional Interconnection Lines in the Electricity Market