Time for a Fiscal Reality Check: Toward Accountability in Official Forecasting

To many economists, the Japanese government’s fiscal projections seem increasingly out of touch with reality. The author calls for built-in accountability mechanisms to improve the reliability of official forecasting as a basis for democratic decision making.

In the thick of the COVID-19 pandemic, Prime Minister Yoshihide Suga is channeling his energies into his pet project of digital government. Certainly, providing digital access to government information and services is a worthy undertaking. In many industrial democracies, digital government has been embraced as a means of supplying citizens with the information they need to exercise their sovereignty responsibly.

But easy access to information is a plus only if the information provided is useful and accurate. Many economists have growing doubts about the reliability of the Japanese government’s macroeconomic and fiscal forecasts.

Forecasts and projections are based on fixed assumptions, and it is only to be expected that, as conditions change, the reality may diverge from the prediction. The big question is whether one acknowledges and attempts to learn from such errors. In some countries, such as Australia and Britain, for example, the government performs a factor analysis whenever the economic growth rate diverges substantially from the forecast. In consultation with experts, the forecasters will then adjust their models or measurement methods as deemed necessary to minimize such error in the future.

In its 2019 Fiscal Risks Report, the British Office for Budget Responsibility devotes an entire section to risks from mismeasurement of the output gap. The graph below, reprinted from the report, clearly shows how estimates of potential output growth (broken line) diverged from figures based on real-time economic data (solid line). 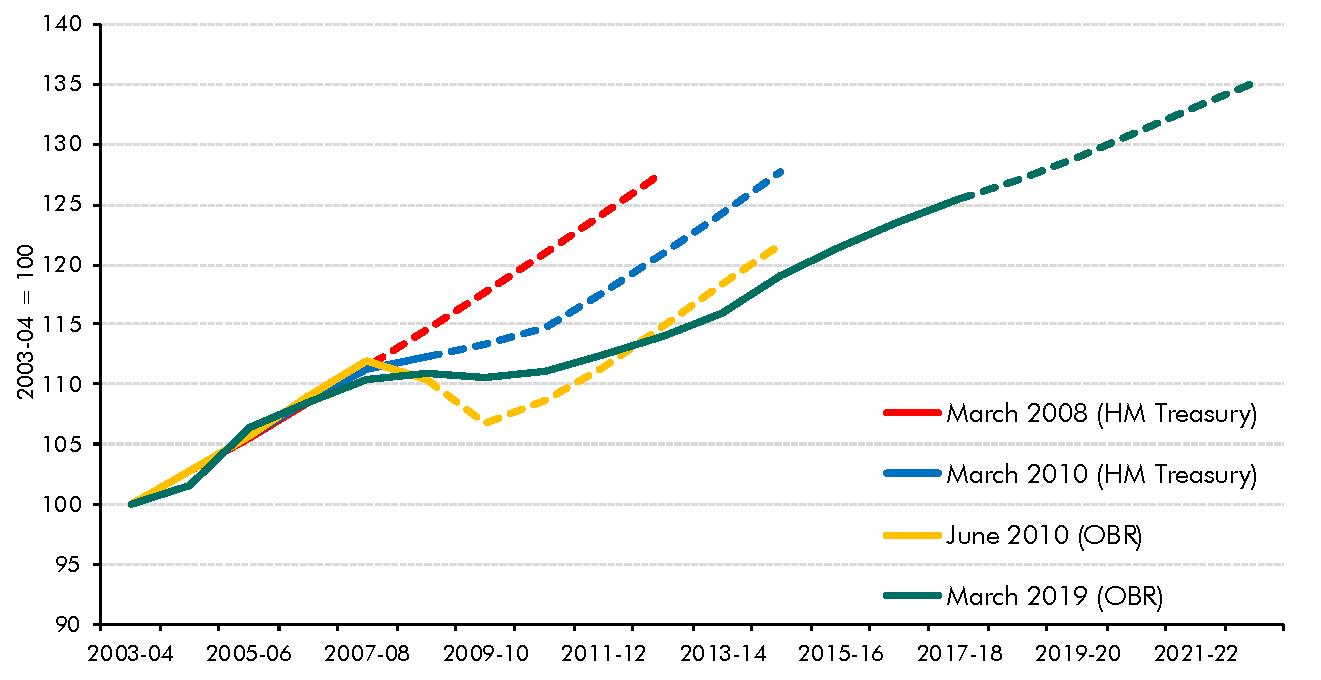 The Japanese government, by contrast, rarely bothers to review the accuracy of its own estimates, and it offers no comparable information to the public.

This failing is increasingly evident in the government’s all-important Economic and Fiscal Projections for Medium to Long Term Analysis, published by the Cabinet Office twice a year (usually in July and January). These projections are designed to provide a picture of the government’s fiscal outlook over the medium and long term—crucial information for policy makers, especially given Japan’s massive public debt and the government’s commitment to eliminate the primary deficit and achieve fiscal consolidation.

Wishful Thinking on the Primary Balance

In FY2018, the government set its sights on eliminating the deficit in the primary balance (central and local governments combined) by the year FY2025, after giving up on the initial target of FY2020. Japan’s top economic policy makers rely on the Economic and Fiscal Projections’ forecasts concerning the total public debt outstanding and the primary balance to monitor the government’s progress toward that goal. Yet the forecasts seem increasingly out of touch with reality, and there is no systemic mechanism for improving their reliability.

Epitomizing the problem are the latest projections for total debt outstanding, as released on January 21, 2021. The Economic and Fiscal Projections posit two alternative scenarios: the “growth achieved case” (in which nominal growth in gross domestic product is roughly 3% in FY2028) and the “baseline case” (in which nominal GDP growth is around 1%). Under the growth scenario, the ratio of public debt (central and local governments combined) to GDP, which stood at 216.3% in FY2020, is projected to fall to 168.5% by FY2030. In the baseline case, it is projected to shrink to 208.1%. Neither projection seems grounded in reality, particularly given the inaccuracy of the government’s forecasts in recent years.

As Figure 2 illustrates, the Economic and Fiscal Projections have been forecasting a decline in public debt as a percentage of GDP since January 2018. In reality, the debt-to-GDP ratio has continued to rise. 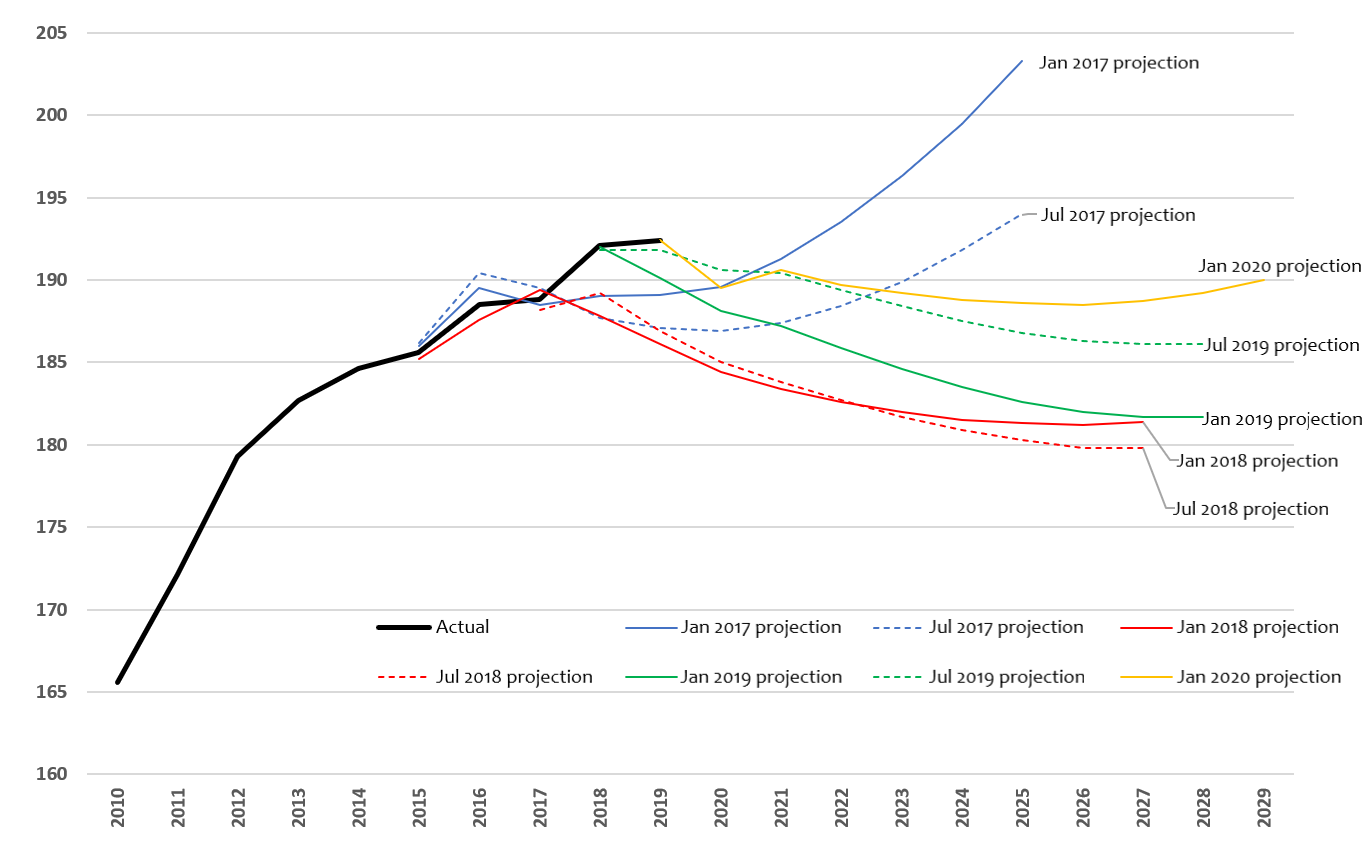 As I noted above, forecasts are bound to err to one degree or another. The important thing is to acknowledge significant errors and identify their causes, so as to avoid making the same mistake over and over. This is why Australia and Britain strive to reduce discrepancies by conducting factor analyses of their past estimates and soliciting expert input on their models and measurement methods. Japan, regrettably, has made no such effort.

The same basic problem plagues the government’s projections concerning the primary balance. The January 2020 Economic and Fiscal Projections, released before the COVID-19 pandemic, predicted that, under the growth scenario, the primary balance would shift to the black in FY2027 (two years later than previously envisioned). The latest edition (January 2021) pushes that back another two years. But given the impact of the current pandemic, even this four-year delay seems overly optimistic. Somehow, the government’s assessment of the overall fiscal outlook has barely changed from a year ago, despite the massive increase in deficit spending since the outbreak of COVID-19.

In FY2020, the national government’s initial general account budget came to ¥100.8 trillion. The subsequent passage of three supplementary budgets boosted total expenditures to ¥175.7 trillion. As a result, the public deficit (central and local governments combined) increased more than three-fold from the initial estimate, from ¥22.1 trillion to ¥75.7 trillion. How can the long-term fiscal outlook remain essentially unchanged?

The pandemic has placed a massive and unanticipated burden on public finances. At a time like this, it is important that the nation have accurate economic and fiscal information as a basis for productive debate to choose a direction for reform via the democratic process. It is time the Japanese government publicly acknowledged its forecasting errors while working to identify and correct the sources of such discrepancies in order to provide our citizens with the information they need to make informed decisions. 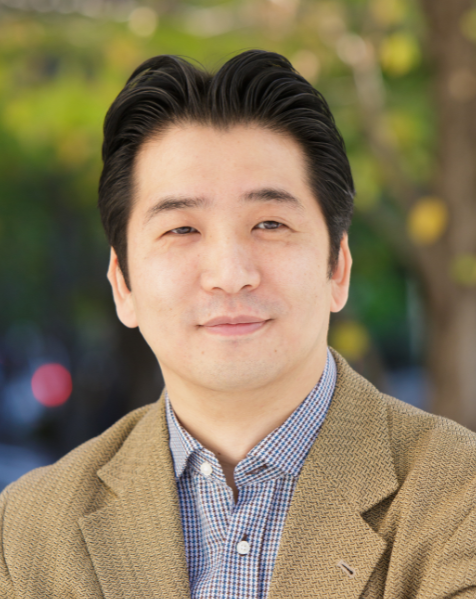