Ten years after the Great East Japan Earthquake, with the monumental task of reconstruction nearing completion, Shigeki Morinobu calls for a similar approach to the funding of Japan’s pandemic response.

On March 3, 2011, an immense tsunami triggered by the Great East Japan Earthquake devastated dozens of coastal communities in northeastern Japan. From the beginning, the Japanese government insisted that post-disaster reconstruction was a prerequisite for Japan’s economic revitalization and pledged to provide whatever support was needed to that end. In the decade since then, the central government has made good on its commitment, providing unprecedented support for hard and soft projects and initiatives. As a result, all the disaster areas except for those affected by the Fukushima nuclear accident have entered the “overall completion” stage of the reconstruction process, an achievement meriting our admiration and respect.

What has this 10-year process taught us about fiscal management in the context of large-scale disasters and shocks—the COVID-19 pandemic included? In my view, there are two basic lessons to be learned.

The first is the wisdom of subjecting such extraordinary expenditures and their funding to unitary oversight and time limits so as to avoid passing the burden on to future generations. With this in mind, the government established a Special Account for Reconstruction from the Great East Japan Earthquake. Under this account, all spending programs were time-limited. They were to be funded by government-issued reconstruction bonds, whose redemption would be financed by a combination of temporary surtaxes and the sale of government assets. The surtaxes added 2.1% to each taxpayer’s (national) income tax liability for a period of 25 years and ¥1,000 to the local inhabitants’ tax for 10 years. Under this scheme, the entire reconstruction debt is expected to be paid off by 2037.

I believe this approach offers a useful model for fiscal management at a time when the COVID-19 response is placing unprecedented new demands on government finances. There is no escaping the need for extraordinary fiscal outlays in response to an event of this magnitude. But given the size of Japan’s budget deficit—the largest of any developed country—a basic level of fiscal discipline is essential, especially amid growing concerns over rising interest rates in the United States and elsewhere.

With an end to the pandemic in sight, now would be the time to set up a “special budget for the pandemic response” to cordon off these extraordinary expenses, issue special government bonds to finance the expenditures, and reach an agreement on a medium-to-long-term plan for funding their redemption through surtaxes or other additional taxes. (I hope to present my ideas on the best tax options for this purpose in a later article.) Without such special measures, Japan’s perilous fiscal position will deteriorate further, with dire consequences for the sustainability of our social security systems. We would not want such a failure to add to the toll already exacerbated by the coronavirus.

The figure below, charting changes in the state of Japan’s general account since 1975, underscores the extraordinary spike in deficit spending and bond issuance precipitated by the government’s response to the COVID-19 pandemic. The scheme I am suggesting would allow the government to separate that spending and borrowing from the general account and address it independently. 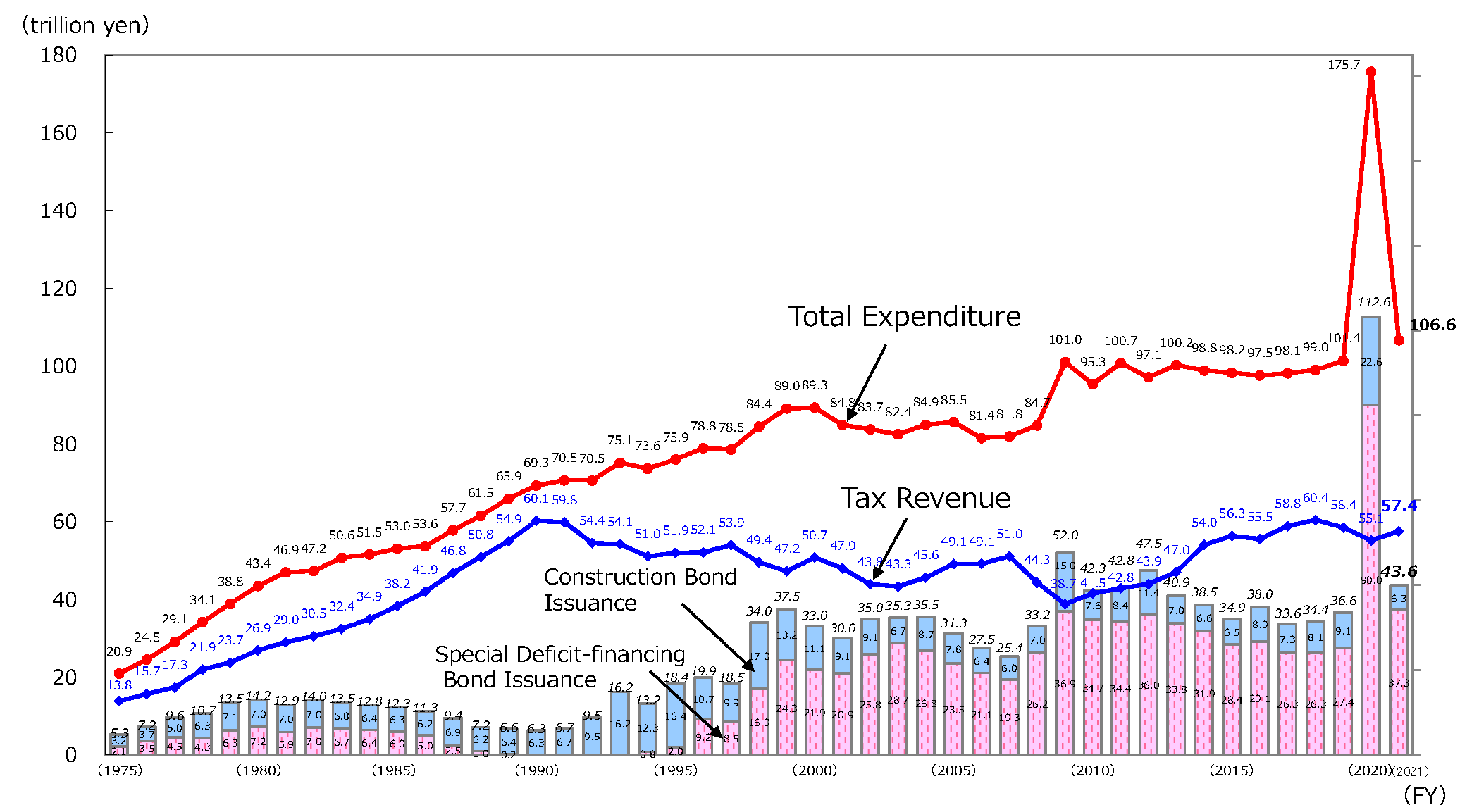 The second basic lesson to be learned from the past decade of reconstruction is the need to enhance accountability.

My specific concern is the measures the central government took to minimize the burden on local government, as by raising the rate of subsidization for reconstruction projects and offering generous “special local allocation tax” grants. While this allowed local governments in disaster-affected areas to pursue reconstruction projects expeditiously, without worrying about funding, it sometimes prevented the community and its leaders from taking ownership. Asking local governments to bear a portion of the expense is a way of ensuring that they and the people they serve consider the merits of a project before approving it. Leaving things in the hands of central-government bureaucrats can lead to wasteful spending.

Since all of the nation’s taxpayers are ultimately bearing the burden for reconstruction via the aforementioned surtaxes, they have a right to know whether their tax money has been wisely spent on projects that truly contributed to recovery and reconstruction from the Great East Japan Earthquake. To this end, a thorough review of expenditures should be carried out by the Board of Audit, a politically independent body.