Japan’s ambitious new target for GHG emission reductions seeks to make up lost ground in responding to the threat of climate change. The big question, posits energy industry expert Takeo Kikkawa, is: can Japan deliver? This article is based on a presentation delivered during a July 7 webinar hosted by the Tokyo Foundation for Policy Research.

At the April 22 Leaders Summit on Climate organized by US President Joe Biden, Prime Minister Yoshihide Suga announced a new national goal of reducing domestic greenhouse gas emissions by 46% from 2013 levels by 2030, adding that Japan would shoot for an even more ambitious 50% reduction.

The pious wish of a 50% cut received considerably more attention internationally than it did in Japan, but in either case, the new target represents a dramatic upward revision from Japan’s previous 26% reduction commitment, which the government made in 2015 under the Paris Agreement (signed at COP21, the 21st Conference of Parties to the UN Framework on Climate Change), and which it has reaffirmed countless times since then.

Underpinning the 26% commitment was the 2030 “energy supply and demand structure,” or energy mix, approved in 2015 (prior to COP21) and incorporated unchanged in the nation’s fifth and most recent Strategic Energy Plan, adopted in 2018. The energy mix indicates the share of various energy sources (oil, natural gas, coal, nuclear power, solar power, wind power, and so forth) in the primary energy supply and in the generation of electricity.

The policymaking procedure was reversed in formulating the 46%–50% goal. Instead of hammering out feasible energy-mix targets and setting the emissions-reduction goal accordingly, as in the past, the government announced the new reduction commitment first—doubtless in response to political pressure from the Biden administration—and left it to others to iron out the discrepancies. Now those responsible for the nuts and bolts of energy policy are scrambling to balance the nation’s energy accounts.

Do the Numbers Add Up?

Under the Fifth Strategic Energy Plan, renewable energy’s share in Japan’s electricity generation mix was to reach 22%–24% in 2030, but that target was already under review when Suga made his announcement. The Basic Policy Subcommittee of the General Resource and Energy Research Committee (under the Ministry of Economy, Trade, and Industry) had begun drafting the Sixth Strategic Energy Plan in October 2020. At a meeting on April 13, 2021, the members agreed to boost renewables’ share to about 30%. Nine days after reaching that decision, they learned that the government’s 2030 goal for GHG emissions reduction had jumped from 26% to 46%. To make the numbers add up, they decided that renewables’ share would have to rise to somewhere between 35% and 39%. In short, without the benefit of new data or analyses, they were obliged to boost the 2030 renewable energy ratio by almost 10 percentage points. Under the circumstances, there is bound to be skepticism as to the achievability of the revised energy mix. 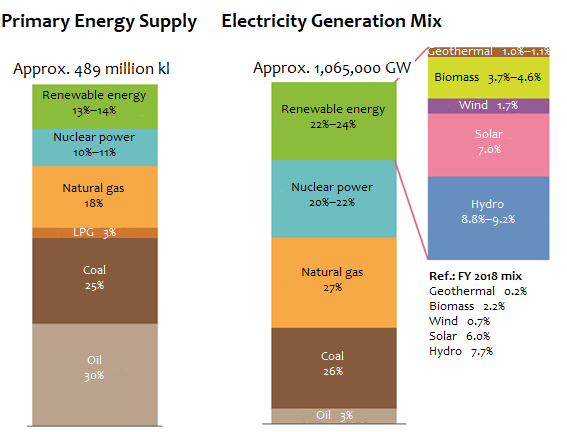 In fact, to balance the books, policy planners will also be obliged to lower their estimates for total electricity use and energy consumption in 2030. To this end, they seem poised to reduce Japan’s projected output of crude steel. Taken too far, such data manipulation could send the wrong message concerning the future of Japanese steel. Policymakers must proceed cautiously, lest their accounting tricks cast a pall over Japanese industry.

We must also keep in mind that boosting renewables’ ratio means slashing the contribution of other energy sources. The 20%–22% share currently envisioned for nuclear power is unrealistically high by anyone’s standards and begs to be reduced. Yet political considerations—such as concerns over a backlash from communities that are economically dependent on nuclear power plants—appear to have tied the planners’ hands, with the result that the nuclear component of the energy mix seems likely to remain unchanged in the Sixth Strategic Energy Plan. That means the reduction must come solely from fossil fuels, including thermal power plants.

METI’s energy planners were prepared to reduce dependence on coal to some degree. But slashing coal’s share too quickly could interfere with other imperatives of energy policy, such as ensuring a stable power supply and containing costs.

The pressure to reduce fossil fuels’ share of the mix affects natural gas as well as coal. The Fifth Strategic Energy Plan explicitly calls for a shift to natural gas, even while implicitly casting doubt on the future of that energy source. If the soon-to-be-adopted Sixth Strategic Energy Plan reduces the contribution of natural gas in order to reconcile the 2030 energy mix with the new 46%–50% GHG reduction target, then the prospects for natural gas will look even bleaker, which could have a negative impact on the procurement of liquefied natural gas. That would compromise the stability of Japan’s energy supply, and it would also undermine our efforts to reduce emissions between now and 2030, since the shift from oil and coal to cleaner natural gas was expected to yield substantial emissions-reduction benefits.

Lest I be misunderstood, a 46%–50% cut in GHG emissions by 2030 is not in itself a bad thing. To the contrary, it is a laudable goal, consistent with the Paris Agreement’s call to limit global warming to 1.5 degrees Celsius, compared to pre-industrial levels. Ultimately, the blame for the problems I have enumerated lies with the current 2030 energy mix, approved in 2015 and incorporated unchanged in the Fifth Strategic Energy Plan. Had planners called for a 30% share for renewables (with nuclear power at a more realistic 15%) at that time, they would face a much less difficult challenge now.

For example, the centerpiece of METI’s Green Growth Strategy, announced in December last year, is an initiative that calls for new offshore wind projects at the pace of 1 gigawatt of capacity per year between now and 2030—but it will take each of those new wind farms years to come online. Had the initiative been launched five years earlier, the target of boosting renewables’ share to 35%–39% by 2030 might not seem so unrealistic.

Thus far, Japan has lagged behind much of the industrial world in its response to the threat of climate change. Prime Minister Suga seems determined to make up lost ground with his October 2020 pledge to achieve carbon neutrality by 2050 and his April 2021 commitment to a 46%–50% reduction in GHG emissions (from 2013 levels) by 2030. In terms of promises, he has indeed closed the gap. But whether Japan can deliver is a different matter altogether. Hampered by the negative legacy of the Fifth Strategic Energy Plan and other bad policies, Japan may well be obliged to fall back on international emissions trading to fulfill its 2030 emissions-reduction commitment (just as it relied on the purchase of carbon credits to meet its Kyoto Protocol obligations).

This does not mean that all is lost. Even if Japan falls short of its 2030 target, it still has a reasonable chance of reaching “net zero” by 2050, providing it uses every means at its disposal. We who are living in Japan today have an obligation to the future, as citizens of the world, to give it our best shot.

The views and opinions expressed in this article are those of the author and do not necessarily reflect the position of the other symposium participants.