Japan’s new prime minister has vowed to promote economic growth and to narrow wealth gaps through an approach he calls “new capitalism.” His plans, though, are not fiscally sound, cautions Research Director Shigeki Morinobu, and could exacerbate, rather than allay, future anxieties.

Fumio Kishida was elected prime minister by the National Diet on October 4 after he won the Liberal Democratic Party presidential race on September 29. He has vowed to steer Japan away from the neoliberal economic policies of his predecessors, and his vision for a “new capitalism” to promote growth and redistribution and expand the middle class has been generally well received. How, though, will he be able to achieve those goals?

In his policy speech to the Diet on October 8, Kishida cited the following four pillars for his redistribution strategy.

The first is to direct a greater share of corporate earnings to workers through incentives that “fundamentally strengthen our support within the tax code” for companies that raise wages.

The second is to expand the middle class and counter the declining birthrate by providing more financial aid for educational expenses and bolstering “support for families with small children,” such as by improving childcare services.

The third is to increase “the income of those working at facilities providing medical nursing, elderly care, childcare services and the like” by reviewing the “public prices” on which their incomes have been based.

And the fourth is “correcting the harmful effects resulting from deciding public finances on a single fiscal-year basis.”

Polarization of the Middle Class

To gain an idea of why the prime minister has outlined such a strategy, it would be instructive to examine how household income and savings have shifted over the past two decades.

Figures 1 and 2 compare the distribution of annual income and assets/savings among Japanese households of two or more persons between the periods before (2002–12) and since Abenomics (2013–19), based on the Ministry of Internal Affairs and Communications’ Survey of Household Economy. Figure 1 shows a clear polarization in income since Abenomics, with the share of people with annual income of ¥4 million to ¥7 million (shown in black) decreasing, while those earning below and above this middle-income range have grown.

Figure 1. Distribution of Annual Income Before and During Abenomics 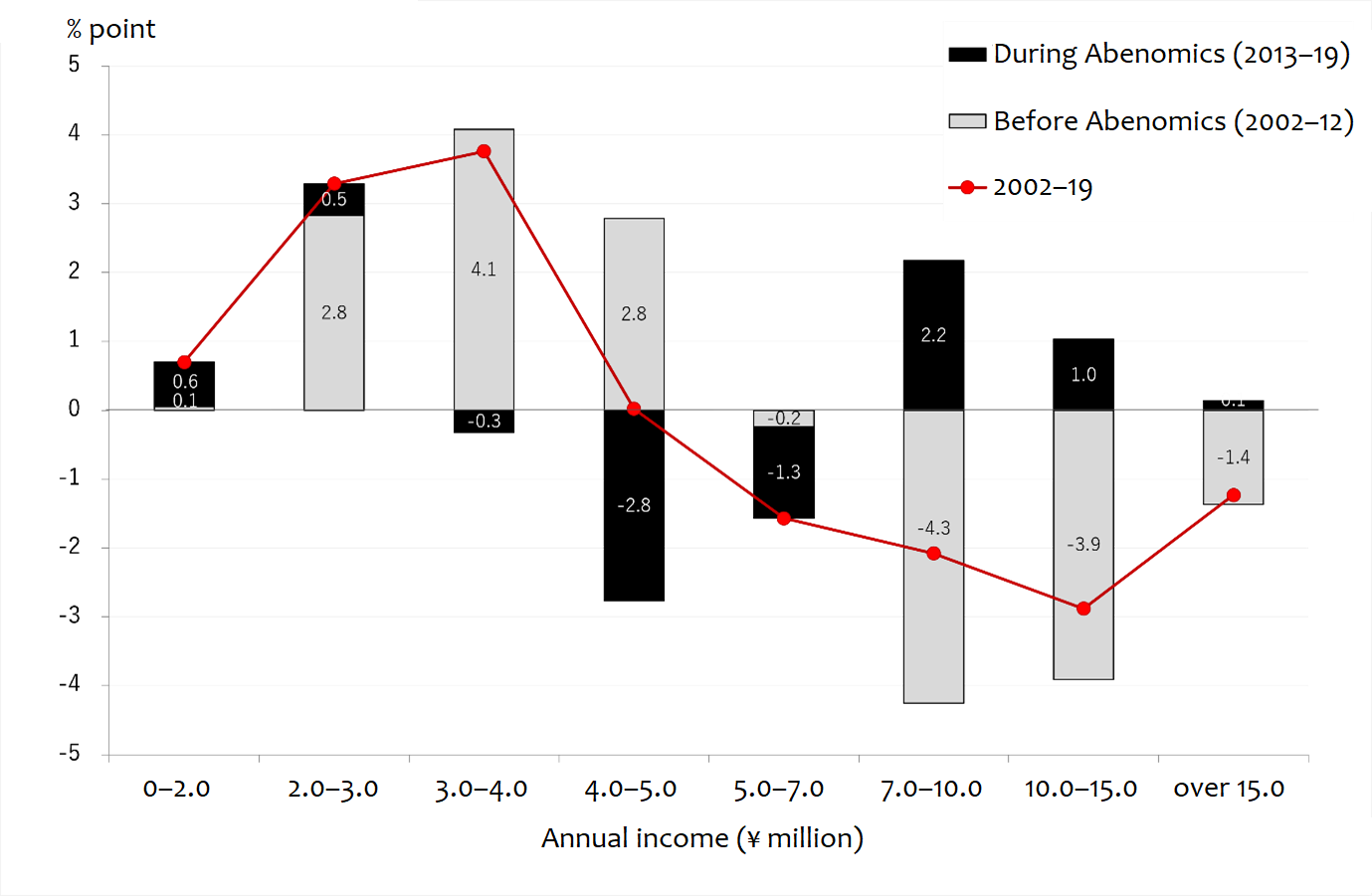 The same trend can be seen in household savings.

Figure 2. Distribution of Household Savings Before and During Abenomics 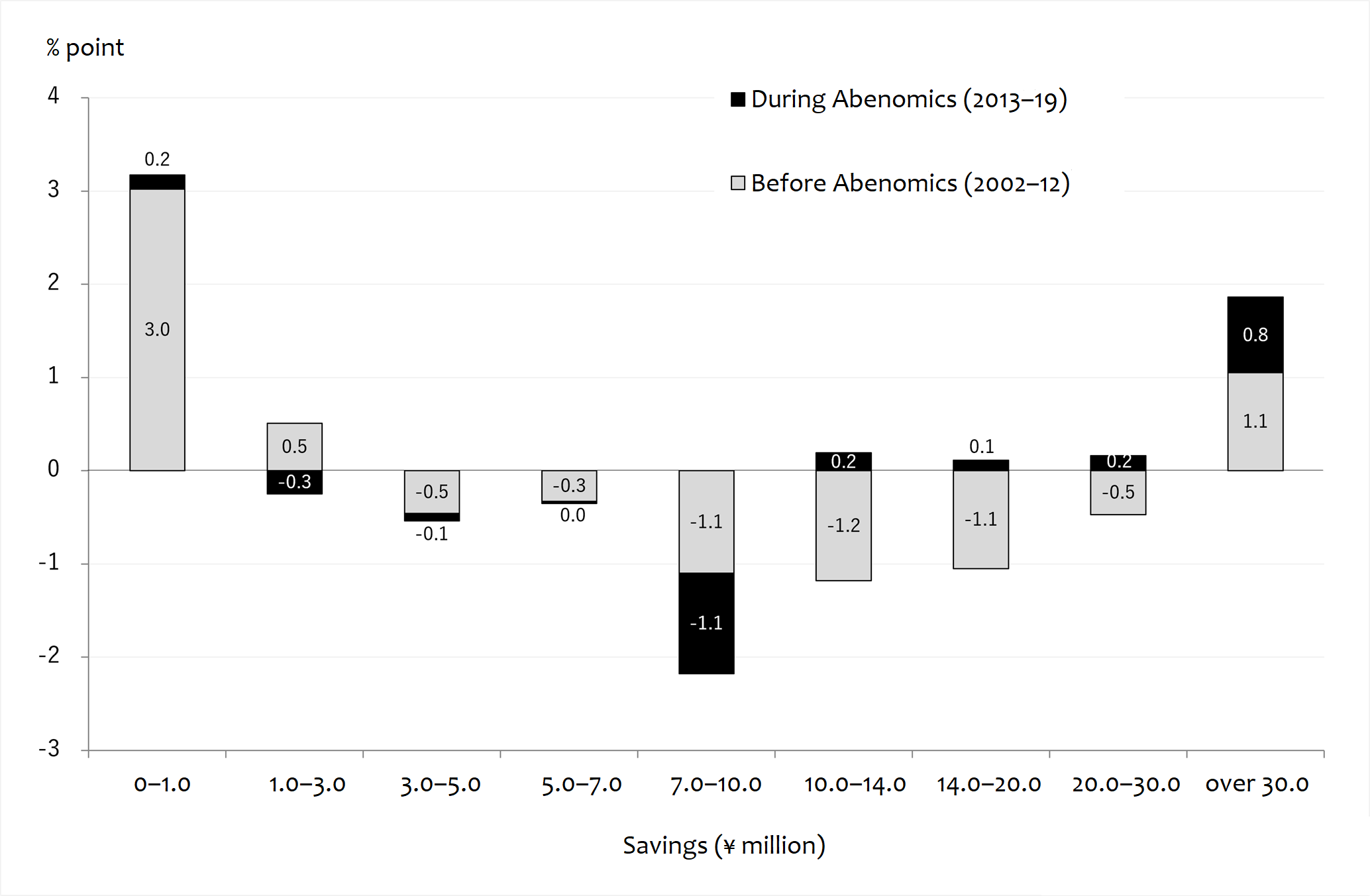 These trends show that during the Abenomics period, there has been a polarization across both income and savings in Japan. This became even more pronounced during the COVID-19 pandemic in 2019–20 (the orange area in Figure 3).

Figure 3. Distribution of Annual Income Since the Pandemic 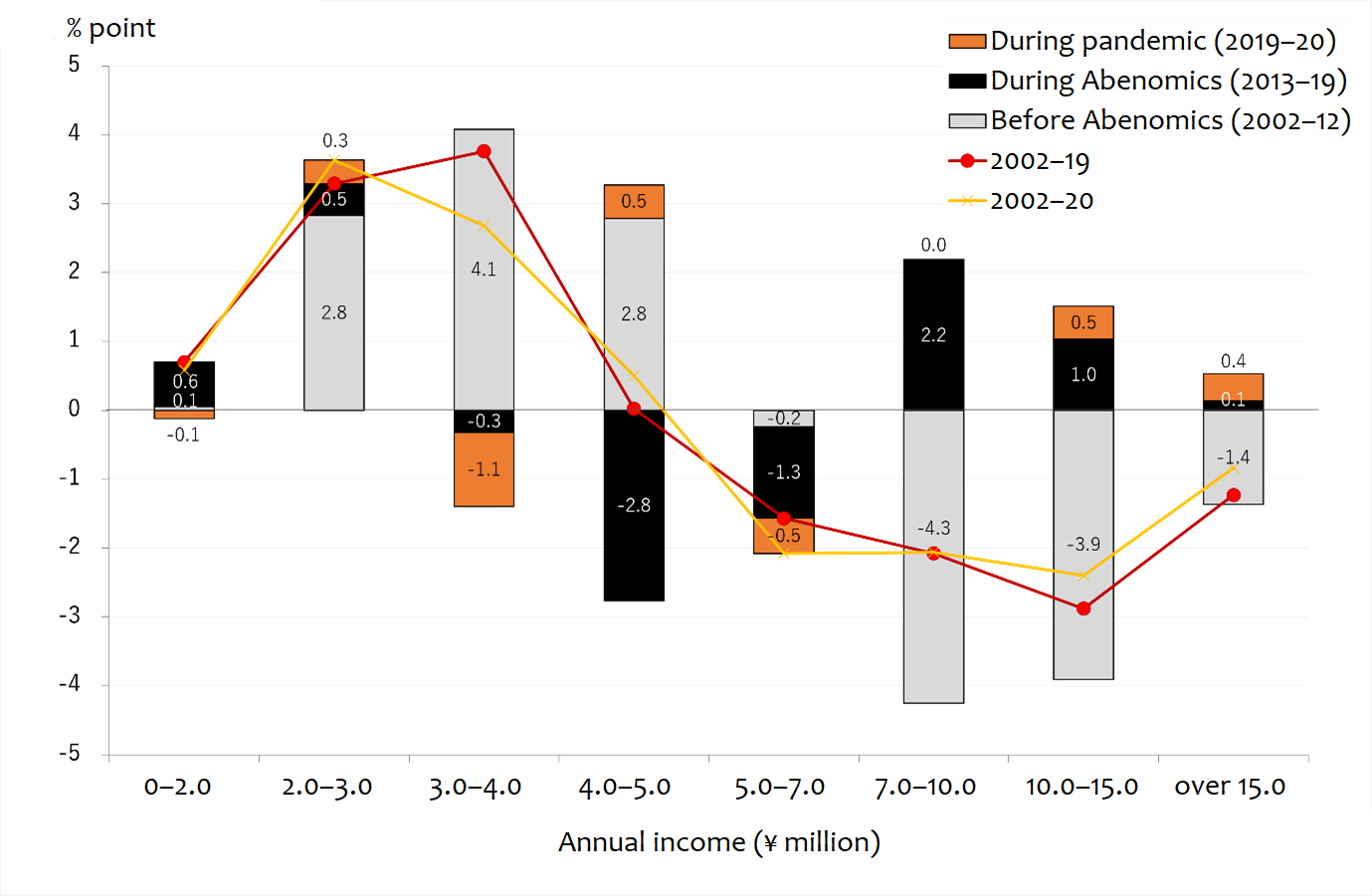 What Is Kishida’s Distribution Strategy?

The first three pillars of Prime Minister Kishida’s redistribution strategy require additional government outlays. But as he has made no mention of how he plans to finance these measures, they are likely to require the issuance of deficit-covering bonds.

He envisions a scenario under which higher wages for private-sector and caregiving workers—induced through corporate tax cuts and bigger social security expenditures—spur consumption and economic growth, which in turn results in higher tax revenue to drive the next phase of growth.

The narrative under Abenomics was that the government would outline growth strategies and promote regulatory reforms to boost the productivity and performance of major companies, after which the benefits would trickle down to smaller companies and result in higher wages throughout the economy. Kishida initially rejected this approach in his bid for the LDP presidency when he vowed to steer the nation away from neoliberalism, but he has recently stopped describing Abenomics as being neoliberal.

The problem I see with the prime minister’s policies is that they are not sustainable. He claims to promote “redistribution,” but that requires moving fiscal resources from one place to another. Inasmuch as his proposals say nothing about how additional outlays are to be financed, they are likely to become nothing more than “handouts.” Wage hikes in the private sector, too, cannot be sustained without improvements in productivity—particularly labor productivity. This, though, requires a growth strategy centered on regulatory reforms to promote entrepreneurship and the development of human resources in the tech industry.

Besides questions about sustainability, there are also problems with efficiency. Rather than offering tax cuts to businesses that raise wages, why not boost workers’ disposable income directly by lowering their tax burden? Many Western countries have introduced a system of refundable tax credits for middle- and low-income earners on the condition that they remain gainfully employed, which has had the effect of incentivizing work. The system was effectively applied to cushion the economic fallout of the pandemic in Britain and the United States.

The Key Is Eliminating Future Uncertainty

The main factor behind Japan’s lingering deflation is sluggish consumer spending. People cannot be blamed, though, for putting money into savings when the future of healthcare, pensions, nursing care, and child-rearing support appears so uncertain. Such anxieties are also discouraging couples from having children, resulting in a declining birthrate.

The only way to alleviate such concerns is to demonstrate that the social security system will adequately support them in old age. Offering benefits and tax cuts without addressing the longer-term structural issues at the heart of people’s anxieties will not produce a virtuous cycle of redistribution and growth, as the prime minister hopes. Studies have shown, in fact, that low-income households put away a higher share of the ¥100,000 COVID relief payments into savings.

A credible roadmap will invariably entail the use of consumption tax revenues to ensure the survivability of the social security system. While campaigning for the LDP presidency, Kishida announced there would be no further hikes in the consumption tax for 10 years. Raising the tax entails heavy political costs, to be sure, but just because the rate is frozen at 10% does not mean we should stop thinking about this issue.

I believe we should launch such discussions now for the following two reasons. First, while Prime Minister Jun’ichiro Koizumi similarly declared that the consumption tax would not be raised during his administration, he did encourage debate on the topic. The Council on Economic and Fiscal Policy thus became a forum for public policy battles between the growth-centered ageshio (rising tide) camp and the fiscal hawks concerned about growing public debt. Weighing in on this issue were not only cabinet ministers and other politicians but also government officials and academics. The debate continued for several years, laying the groundwork for the integrated reform of the tax and social security systems and leading to a recognition of the importance of setting a primary balance target.

The second reason is a lesson learned during the Shinzo Abe administration. Although the prime minister famously twice delayed a consumption tax hike to his political advantage, he ultimately did raise the rate to 10%. This enabled him, ironically, to boost his approval ratings and extend his tenure by directing the additional revenues to providing free preschool education and eliminating waiting lists for childcare.

Abenomics and the Consumption Tax

I have given my general assessment of Abe’s term in office elsewhere on this website, but there are three points worth reiterating about his tenure. The first is that the prime minister deserves credit for the changes he brought to the Japanese economy and society with his “three arrows”: an aggressive monetary policy, flexible fiscal policy, and growth strategy centered on structural reform.

The second is that while his agenda had broad impact, it did little to boost the potential growth rate or real wages and thus had little trickle-down effect. The middle class became increasingly polarized into the higher and lower income groups, as I noted earlier, resulting in wider income and asset gaps. Deflation remains stubbornly entrenched despite the easing of credit to unprecedented levels using unconventional (essentially monetary financing) policy tools.

And the third is that in spite of these shortcomings, Abe became the longest-serving prime minister in modern history. This, I believe, is due to the fiscally liberal nature of his economic policies. The more than ¥10 trillion in revenues accruing from consumption tax hikes to 8% and then to 10% were used to support families with young children, offer free preschool education, and eliminate waiting lists for childcare (Figure 4). These policies helped sustain Abe’s popularity during his tenure. 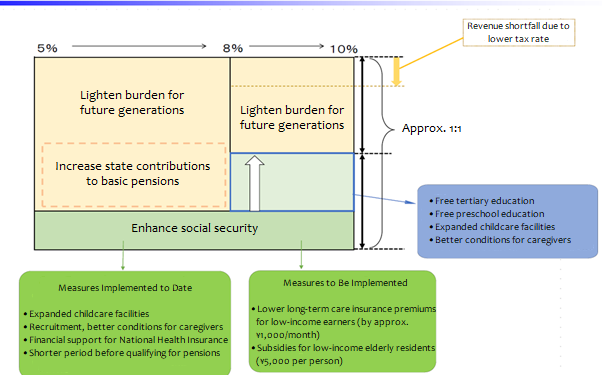 Let us take a closer look at his fiscal record. The size of government, as measured by the national burden ratio (ratio of income tax and social security contributions to national income), increased from 39.7% at the start of his second term in 2012 to 46.1% in fiscal 2020, an increase of over 6 percentage points (3.5 points in the tax burden and 2.8 points in social security contributions). This is roughly equivalent to Britain’s figure of 47.8% (in 2018).

Compare this with the Koizumi years. In 2001, when he took office, the national burden ratio was 36.7%. Five years later, when he stepped down in 2006, it was 37.2%. The absence of any sizable expansion in the size of government can be attributed to Koizumi’s neoliberal policies, which were meaningful at the time for putting an end to a series of unnecessary public works projects.

The shift to bigger government during Abe’s term was a byproduct of the legal requirement—put in place during his predecessor’s administration—to raise the consumption tax to 10%. It may not have been intended, but the result was higher social security expenditures to address the aging of the Japanese population, which helped to mitigate the kind of widening disparities seen in many Western countries.

The combined long-term debt of the national and local governments increased despite the higher consumption tax rates, however, and the goal of achieving a primary surplus was postponed from fiscal 2020 to 2025. This shows that the additional tax revenues were used to enhance social security, rather than support fiscal consolidation.

Promoting redistribution in a sustainable manner will be the key to both narrowing wealth gaps and eliminating people’s future anxieties. This should also lead to robust economic growth. I do not mean to say that redistribution should come first; policies to promote growth and reduce inequality should be pursued in tandem and be in line with a longer-term vision. Toward this end, a debate on raising the consumption tax is unavoidable.

Soon after he came into office, Prime Minister Kishida announced he would not immediately seek to raise taxes on financial income, as he had pledged during the party leadership campaign. The goal of a higher rate for such a tax is not to boost government revenue, though, but to ease the disparities that have become more pronounced during the pandemic. There are growing calls in the United States and Britain, for instance, for the rich to pay higher taxes on capital gains and financial transactions.

What we in Japan need, therefore, is not a uniform hike in the financial income tax but an approach specifically targeting those who are financially wealthy. Any adverse impact on the stock market can be mitigated by enhancing the tax-exempt benefits available under the NISA (Nippon individual savings account) scheme and extending the carryover period for losses.

Kishida’s announcement that he is postponing a revision of the financial income tax appears somewhat premature, considering that achieving redistribution is one of his stated goals. If his administration comes to be viewed as reneging on its promises, the public could quickly turn its back and begin looking for a more reliable replacement.