Challenges of Carbon Border Adjustment: Considering the Focus of Expansion of the Carbon Tax

The following is reprinted from Discuss Japan, Nov. 1, 2021.

Under the new mechanism, importers will have to purchase certificates to cover their CO2 emission per ton in accordance with the carbon prices paid in the country of origin, at a price corresponding to the EU ETS emission quota price (auction price). The revenue will be allocated to finance the EU’s Economic Recovery Plan. It is effectively an import tax that collects the difference in carbon prices in accordance with emissions.

The introduction of the CBAM could have a significant impact on effective carbon rates in Japan, which are lower than those of European countries. It is also expected to have a major impact on world trade given its questionable compatibility with the World Trade Organization (WTO) Agreement, which has always advocated free trade. This is a trade issue that needs to be discussed fully with the EU and the United States.

The key question for Japan is how to achieve the goal of realizing carbon neutrality and reducing Japanese greenhouse gas emissions to a net zero level by 2050. This is an extremely challenging goal, requiring major social reform such as the transformation of the industrial structure and the behavior modification of companies and individuals. At the same time, it offers new investment opportunities and is a major chance to drive the economy forward.

The long-term and sustainable reduction of CO2 emissions cannot be achieved solely through efforts on the supply side in the form of technological innovations or other voluntary initiatives by companies. Incentives and mechanisms also need to be introduced by the demand side to encourage the behavior modification of all economic units.

A concrete way of doing this is carbon pricing, which has been introduced by European countries. Specific examples of carbon pricing are “emissions trading,” whereby CO2 emission quotas are traded, and a “carbon tax,” whereby a tax is imposed on CO2 emissions.

Emissions trading is a system that allocates a CO2 emission quota to individual companies and requires companies exceeding their emissions quota to purchase the excess emissions from companies that reduce emissions below their quota. This presents challenges such as the need for individual monitoring of the emissions of companies covered by the scheme and the establishment of an emissions trading exchange, as well as loss of predictability due to large price fluctuations.

In comparison, a carbon tax levied on CO2 emissions has a number of advantages. Firstly, a mechanism that encourages companies to align their activities with a market mechanism by “internalizing” the cost of global warming into the market price through the explicit imposition of a tariff corresponding to the “external cost” is simple and easy to understand.

The price effect of a carbon tax can stimulate innovation in new technologies and alternative energies, as well as encouraging behavior modification of consumers through price signals. A further advantage is that the tax revenue obtained by governments can be utilized for new policies. As will be shown below, the blow to Japanese industry can be softened by making border adjustments, such as the current consumption tax.

I would like to present a realistic concrete proposal for a carbon tax that would determine the tax rate proportionally using the tax rate of CO2 emission per ton, and the challenges that would need to be addressed.

Essentially, I propose that the focus of consideration should be the expansion of the carbon tax currently in place in Japan, namely the Global Warming Countermeasure Tax, levied proportionally on CO2 emissions.

The Global Warming Countermeasure Tax, introduced in 2012, was established as an additional tariff to the Petroleum and Coal Tax introduced in 1978. All CO2 emissions from fossil fuels are taxed at a rate of 289 yen per ton. Tax revenues are transferred to the Special Accounts for Energy Measures and are appropriated for global warming countermeasures.

The current Petroleum and Coal Tax (the main rules) has a large disparity in the tax burden per unit of CO2 emissions by product, such as crude oil / petroleum products, liquefied natural gas (LNG), and other gases and coals (see figure). Closing the gap (adjusting it to 779 yen) would make it into an explicit carbon tax based on CO2 emissions. The most realistic approach would be to increase this level in line with progress in decarbonization. Many European countries have also introduced a carbon tax as a supplement to their existing energy tax system. 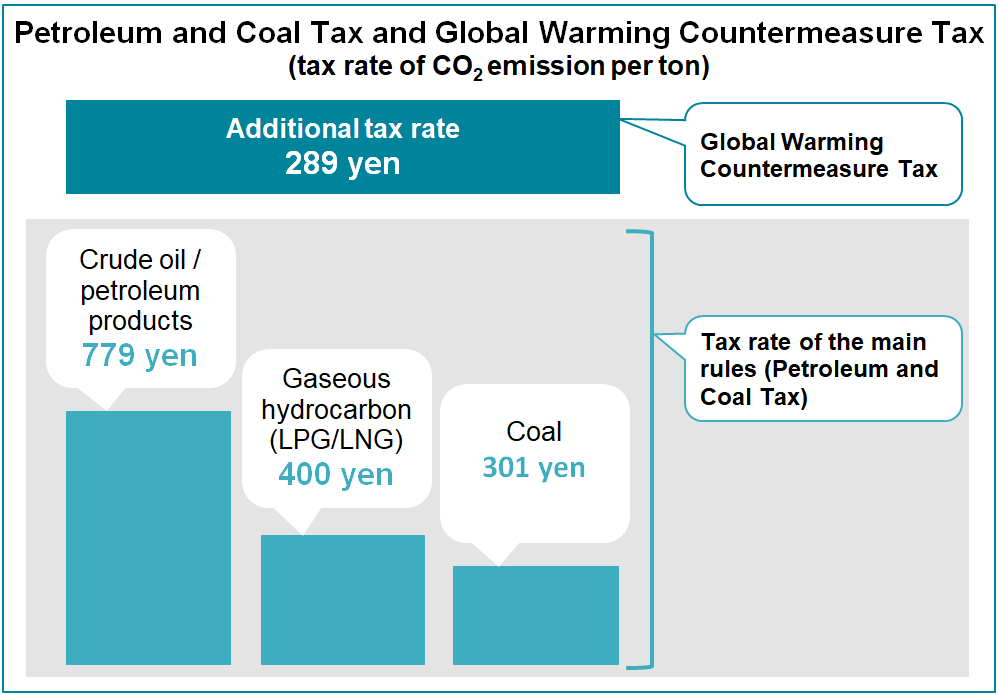 Source: Created by the author based on data of the Ministry of Environment

Enhancing the carbon tax in this way is likely to be met with significant resistance from the individual industries for which the burden will be increased. One potential way of mitigating this is a border adjustment-type carbon tax, as proposed by Professor Doi Takero of Keio University and his colleagues. While this is almost undistinguishable from the CBAM of the EU referred to at the beginning of this article, it is created as a domestic tax, whereas the CBAM of the EU is a tariff.

Specifically, under the same system as the current consumption tax (except that the carbon tax is a specific tax based on CO2), companies pay tax on taxable purchases consumed, such as power consumption, and receive a purchase tax credit at the point of sale, which is passed on to the end consumer. A carbon tax equivalent to that levied on domestically produced goods is levied on products from overseas at the importation stage, with the carbon tax borne in Japan refunded at the time of export.

The impact on Japan’s ability to compete in world markets will be insignificant, as imports from countries with inadequate environmental controls will be taxed at the equivalent of the domestic rate, which will curb imports, while exports will receive a refund.

There are also challenges. The need to calculate the tax rate per unit of product according to the amount of energy input during the manufacturing process and the introduction of a mechanism to pass it on to the next stage of the transaction (invoice = tax slip) need to be finalized.

In order to achieve decarbonization, it is of the utmost importance that the carbon tax be understood as a growth strategy that will lead to the upgrading of Japan’s industrial structure and economic growth. The way tax revenue is used is an important issue in this regard. For example, it could be used to reduce taxes for families (income tax) and companies (corporation tax), for regressive measures since the burden is heavier on low-income individuals, or to finance fiscal reconstruction or COVID-19 measures. However, a carbon tax cannot be a permanent source of revenue, since revenues will fall as carbon targets are met.

A concerted national effort is needed to achieve the goal of decarbonization. Tax revenues could therefore be considered as a general revenue source and used in line with the Growth Strategy; for example, to invest in radical innovations which would entail risks and costs that the private sector cannot easily bear. Support is also needed for the transformation of the industrial structure.

Nordic countries have raised carbon prices while improving their GDP per person. It is important that Japan devises a national plan that is compatible with economic growth and that fulfills its responsibility to resolve the issues that affect the whole world. The Ministry of Economy, Trade and Industry and the Ministry of the Environment are working on carbon pricing. Discussions that transcend the interests of ministries are needed.

Translated by The Japan Journal, Ltd. The article first appeared in the “Keizai kyoshitsu” column of The Nikkei newspaper on 10 August 2021 under the title, “Kokkyo-tansozei no kadai: ‘tansozei’ no kakuju jikuni kento wo (Challenges of Carbon Border Adjustment: Considering the Focus of Expansion of the Carbon Tax).” The Nikkei, 10 August 2021.