The Hatoyama administration has outlined a new basic policy on reexamining the privatization of postal services. What is problematic with the existing privatization agenda and what issues must be addressed?

The government adopted a basic policy on postal reform at a cabinet meeting on October 20, 2009. Under the basic policy, the current configuration of four postal companies—including those for mail delivery, banking, insurance, and the network of post offices—operating under a holding company will come under review, and the management structure will be reorganized.

The basic policy also calls for the submission of a postal reform bill to the next regular session of the National Diet to fundamentally revamp current operations.

Before submitting the reform bill, the government submitted a separate bill to freeze the sale of Japan Post shares during the current extraordinary Diet session,and the bill was passed on December 4.

The privatization of postal services was launched in 2007 with the establishment of a holding company (Japan Post Holdings) along with Japan Post Network, Japan Post Service, Japan Post Bank, and Japan Post Insurance. The current reforms come just two years following the start of privatization.

The start of privatization was expected to lead to a diverse range of new services for users. Examples of new businesses that were actually launched include an alliance between the postal group and a convenience store chain and the provision of housing loans by the Japan Post Bank.

It is unclear, though, whether the initial principles of privatization are being adequately pursued, that is, (1) providing quality and diverse services at low rates; (2) utilizing people’s savings for economic revitalization and in helping restore fiscal soundness; and (3) giving management greater freedom and thereby boosting profitability.

In reexamining the privatization efforts made thus far, it is necessary to first review the goals of privatization and analyze whether the measures taken have been in step with those goals. Such a review should serve as the basis for subsequent discussions on postal reform.

Postal privatization was cited as the top priority of the administration of Junichiro Koizumi, who became prime minister in 2001. Talk of privatization began earlier, though, during discussions of an administrative reform council set up by Prime Minister Ryutaro Hashimoto.

The council proposed that three postal services be privatized by first isolating them from the then Posts and Telecommunications Ministry. When the central bureaucracy was reorganized in January 2001, however, the three services were relaunched intact as the Postal Services Agency, which later became the Japan Post public corporation. This was accompanied by (1) the liberalization of the letter market to allow entry of private carriers and (2) the abolition of entrusting postal funds to the Ministry of Finance’s Trust Fund Bureau.

The Koizumi administration utilized the discussions of the Council on Economy and Fiscal Policy to enact a postal privatization bill in 2005. The bill contained elements, though, that were not part of the proposals made during the initial days of the Koizumi’s tenure.

For example, postal privatization was initially targeted at the three services of mail delivery, banking, and insurance. Since then, the nationwide network of post offices was added as a fourth service in the light of the importance of keeping branch offices in operation.

This raised the question, though, of whether the network of branch offices could, by themselves, remain solvent as a private company. Of the approximately 24,000 post offices in the country at the time, 94% were operating in the red.

In the light of the financial difficulties a privatized network of post offices were expected to face and in consideration of the importance of maintaining a physical network of offices throughout the country, the government and ruling parties agreed to set up a “Regional-Social Contribution Fund” of 1 trillion yen (expandable to 2 trillion yen).

As such, doubts have surfaced as to whether the network of post offices should have been privatized at all.

The privatization of postal services necessitated the leveling of the playing field to ensure fair competition with existing private companies. Both the banking and insurance services possessed much greater financial assets than their private counterparts, but no attempt was made to break up these services into regional companies, as was the case when NTT and the Japanese National Railways were privatized.

The decision of whether or not to break up the postal, banking, and insurance companies was left to the discretion of the new management team; thus far, there seems to be no attempt to further break them up into regional companies.

In spite of the call for a level playing field, then, the postal banking and insurance companies have been allowed to maintain their huge assets, giving them an advantage over other private institutions. Many have raised questions over this state of affairs.

The basic policy on postal reform mentioned above, though, does not provide a clear blueprint of what needs to be undone and what postal services should offer following the reforms.

The bill on freezing sales of Japan Post shares to be submitted to the extraordinary Diet session stipulates that the Japanese government shall continue to own at least a third of these shares even after 2017. The question that arises, therefore, is whether postal delivery and the network of post offices really needed to be turned into stock companies.
Also requiring further debate is the relationship between the post offices and banking-insurance services.

Greater thought must be given to dividing the banking and insurance services into regional companies as a means of leveling the playing field with existing private financial firms.

As for how the financial assets of the postal deposits are managed, currently some 80% are used to purchase government bonds. This is a business model that is clearly at odds with those of other private banks. (Regional banks, on average, spend around 10% of their assets on government bonds.) Is there really a need for the postal bank to compete head-on with private banks, such as by actively moving into the lending business or seeking higher returns with higher-risk instruments?

The national economy could be much better served by developing a mechanism to utilize the banking assets for policy areas requiring large investments (via government-affiliated or private banks), rather than channeling the deposits to home mortgages and corporate loans.

Such a consideration would also be necessary in the light of the fact that an abrupt change in the use of postal assets could have a disruptive impact on the government bond market. 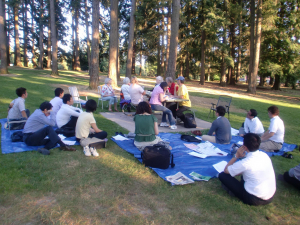 In Portland, a New Public Paradigm