How was Japan transformed from a nation of artisans into a nation of mass-producers and mass-consumers—and what have the Japanese lost in the process? In the first article of a three-part series, the author describes the great extinction that wiped out cottage industries all across Japan in the decades following World War II.

Before discussing the extinction of the handicrafts and hand trades in Japan, I should first explain what I mean by those terms. My discussion is not limited to such traditional decorative arts as lacquering, woodcarving, ceramics, weaving, and dyeing but covers all the trades in which people rely primarily on their own hands and bodies to fashion goods for practical use. This includes the manufacture of everyday household items like colanders, buckets, and barrels, as well as such diverse trades as boatbuilding, thatching, plastering, metalworking, and furniture making.

Skilled manual trades of this sort have been dying out for a very long time, and people have been lamenting their death for just as long. In the Meiji era (1868–1912), the renowned sculptor Takamura Koun commented to his son, the poet Takamura Kotaro, on the disappearance of handwork since the end of the Edo period (1603–1867). He was looking back over a career in which he had reached the summit of success only after years of grueling training under the apprenticeship system that was common to all Japan’s traditional arts, crafts, and manual trades.

After the Meiji restoration, the numerous cottage industries that had flourished during the Edo period fell victim to the national goal of developing industry to build up economic and military strength and catch up with the West. And the trend only accelerated as time went on. In the Taisho era (1912–26), people looked back nostalgically on the craftsmanship of the Meiji era, and in the Showa era (1926–89), they lamented the disappearance of the kind of hand work their parents and grandparents had taken for granted.

Be that as it may, the decline of the skilled hand trades accelerated dramatically in the period of social transformation following World War II. The causes of the change were many. In the new postwar world, people who followed in their parents’ footsteps and took over the family business were regarded as behind the times. The authority of the patriarch had been weakened, and the old apprenticeship system was labeled as feudalistic. People were abandoning their rural towns and villages and moving to the cities in droves. Changes in people’s lifestyles and livelihoods drove changes in the goods and tools they used, and these changes in turn undermined the ethic and ideals that had supported the hand trades.

Then again, to some extent, it was probably the other way around.

I was born in 1947 in the small castle town of Kakunodate in Akita Prefecture. Culturally, the town was at least a decade behind Tokyo. This is not to say that the people were uneducated or uncultivated, only that it took that long for the latest trends in consumer culture to find their way to our town from the city. The nation was not nearly as uniform as it is today, and one could still find in the countryside an older Japan that had ceased to exist in the cities. The scenery, lifestyle, and attitudes were those that had grown out of the local geography, climate, and history.

When I was a young boy, many of the traditional trades still survived in my town. In the commercial section of town, which consisted of about 30 buildings, there was a blacksmith, a caterer, a tailor, a fish merchant, a seller of koji (mold for fermentation), a carpenter, a stonecutter, a cooper, a barber, a wooden sandal maker, a sake brewer, a tofu maker, and a sushi shop. The neighboring town had traditional artisans specializing in cherry bark, carved wood, and lacquer, as well a tinsmith, a sawyer, and a horse-shoer. This is also what a typical Japanese town had looked like at the beginning of the Showa era. In our part of the country, very little had changed.

In 1964, the year of the Tokyo Olympics, I was a second-year high school student, and in 1965 I left to attend college in Tokyo. Around that time, things began to change rapidly in my hometown. The blacksmith disappeared, the caterer died, and the cooper closed down because there was no one to take over the business. The sandal maker’s shop turned into a shoe store, and the tailor retired and went to live with his son, who had become a schoolteacher.

When I had graduated from middle school in 1962, my class of baby-boomers filled eight classrooms of more than 50 students each. Approximately half of those graduates were recruited by urban firms and migrated en masse to Tokyo. A few of my classmates became apprenticed to carpenters or plasterers as in the old days, but it was already unusual by that time.

The young people from my town were snapped up by expanding Tokyo-area factories and retailers greedy for labor. In the postwar cultural climate, hand trades were already regarded as backward. Moving to the city to work in a factory or office was the thing to do. There one could earn money without getting one’s hands dirty and buy new things with the money one earned. This was what it meant to be modern.

From that time on, the hand trades disappeared at a breathtaking pace.

There were always cold, hard economic reasons for the extinction of a trade.

One was the disappearance of the natural resources on which such trades generally depended for materials. Another was a lack of human resources to do the manual work such labor-intensive trades required. In some cases, the simple but specialized tools and other equipment the artisan relied on became impossible to obtain because no one making them any more.

But the most basic reason was that demand for the hand-made items produced by these cottage industries had declined sharply.

For centuries the only goods and tools that people used were crafted by hand. Then factories began to churn out comparable objects cheaply, in large numbers. Given a choice between a hand-made bamboo colander and a mass-produced plastic one, people chose the plastic because it was cheap, looked nice, and was easy to care for. It dried so quickly that there was no need to wipe or air it after use. Furthermore, people found the bright colors attractive. The splash of unaccustomed color these plastics brought into Japanese homes must have impressed everyone as quintessentially modern.

Farmers began buying hoes and other implements mass-produced in factories instead of having them made to order. Since they were tailored neither to the soil in one’s field nor to one’s own body type, they were a bit harder to use, but they were so much cheaper that people decided to adapt themselves to the implement instead of the other way around. In this case they chose price over ease of use, and this made the work itself more onerous and less enjoyable. Instead of people shaping the implements, implements shaped the people.

Boats changed from wood to fiberglass-reinforced plastic; buckets and barrels, from wood to plastic; boxes and cartons, from wicker to cardboard. Food-storage containers hand-crafted from lacquered wood or thin, curved sheets of cedar gave way to Tupperware. Virtually everything people used was transformed by the same process.

The factories that manufactured these goods employed workers who had migrated from the countryside, often the sons and daughters of tradespeople who had made a living producing similar objects by hand. Efficient mass-production robbed the goods of their individuality, but it made them cheap. And we, the users, made our choice.

When people stopped buying those hand-made goods, wholesalers and retailers stopped stocking them, and the makers themselves had no choice but to suspend production. The people who supplied those makers with materials had to find another line of business as well. All over the country, blacksmiths who had been the source of countless metal implements vanished in the blink of an eye. “The Village Blacksmith,” once sung by elementary school children throughout Japan, disappeared completely from the textbooks and was forgotten. No one even knew what a blacksmith did any more.

Formerly, the streets of Japanese towns had been lined with the shops displaying the hand-made wares of artisans and other tradespeople in their windows. Often the window provided a view of the artisan at work, allowing passers-by to inspect the quality of the materials and workmanship. As these shops closed down, the towns themselves were completely transformed.

With the disappearance of these traditional handicrafts and skilled manual trades, the Japanese people lost a way of life and a vast fund of knowledge. In the next article, I will explore these changes.

First Photo: A Japanese woodworker uses the traditional tools of his trade in a photograph taken in the early years of the Meiji era (1868–1912). The furniture, boxes, and other objects such master craftsmen created were works of art by today's standards. (Courtesy of the Open University of Japan Library)

Second Photo: Surrounded by his wares, an artisan weaves bamboo into fine baskets in a photo from the mid-Meiji era. Hand-crafted baskets and colanders in a variety of shapes and sizes, painstakingly woven from finely split bamboo, were daily necessities prior to the spread of mass-produced substitutes. (Courtesy of the Open University of Japan Library)

Third Photo: Two women chat before the open storefront of a family-run geta (wooden-soled sandal) shop in this tinted photograph from the mid-Meiji era. Equipped with "teeth" that provided a buffer against the cold and damp, such hand-crafted geta were widespread before World War II—as were shops like this one. (Courtesy of the Open University of Japan Library)

Forth Photo: A woman prepares thread for weaving outside a typical thatch-roofed farmhouse in this tinted photo from the Meiji era (c. 1880s). (Courtesy of the Open University of Japan Library)

Fifth Photo: A fish hawker poses with his goods in a photograph from the Meiji era (c. 1880s). (Courtesy of the city of Sayama, Saitama Prefecture) 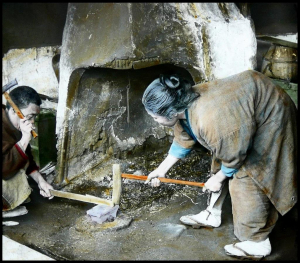 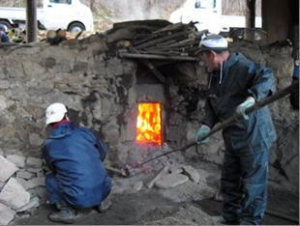