In September 2013 Suzuka Kobayakawa began her 12-month fellowship under the Tokyo Foundation–Acumen Global Fellows Program. In her first report, she details her experiences during the initial training phase in New York before going to work at Pagatech, an innovative startup delivering universal access to financial services in Nigeria.

Life in the “Real World”

It was mid-September when I landed at JFK Airport, full of anticipation and excitement. With me were two suitcases containing everything I would need for the year ahead, which I would spend in New York and Nigeria. I took a taxi at the airport and headed to my new home in Brooklyn.

On the way, many thoughts swirled through my mind. I knew the kind of people the Acumen program attracts, and just thinking about meeting them during my training in New York thrilled me: They were determined to stand with the poor, prepared to listen to unheard voices. They valued generosity, accountability, humility, audacity, and integrity. They listened to others and respected their views. I felt sure I was going to learn a lot from them, and hopefully I could offer something for them as well. How far would we be able to grow?

When I arrived in Brooklyn, I signed the lease papers, and the agent handed me the key. I opened the door to find a number of fellows waiting to give me a friendly welcome: my new roommates, with whom I would spend every waking moment for the next two months.

There were 12 global fellows this year from 11 countries. We’d been in touch several times by phone and email before coming to the States. At some stage someone suggested the idea of renting an apartment together; eventually, seven people signed up and agreed to share a nine-room house. Until now we had only met online. Now we were about to embark on a life together in the real world. So, we took to calling our new home the “Real World House.”

The Acumen office is located inside the Google Building in Manhattan. Whenever I enter a building like this I find myself looking up at the list of tenants and musing about the people who work there. It must be a carry-over from my days in sales, I guess. I observed people as they hurried past, trying to figure things out about them from their facial expressions, the way they dressed, and the things they talked about.

What kind of approach would be effective if I were trying to seal a deal with these people, I wondered. My reverie was interrupted when a man I had never seen before suddenly walked up to me and greeted me with a smile. “Hey! You’e Suzuka, right? You used to work in Nepal? Welcome to Acumen!”

I was quite taken aback to be addressed by name by someone I’d never met before. How did he know who I was? He laughed and told me he had looked at the bios of this year’s fellows on the Acumen webpage and committed a little bit about their backgrounds to memory. This wasn’t the only time I was impressed by people at Acumen. The positive impression was reinforced again and again in the hours that followed.

Everyone I met in the office knocked me out: their inspiring presence, their beautiful manners, their stellar backgrounds. They all seemed to be such great listeners and observers of people. I was struck by how considerate they were, by their communication skills, and by the sense of fulfillment that seemed to emanate from inside them. I also got to meet Jacqueline Novogratz, Acumen’s founder. I had longed to meet her ever since I read her memoir, The Blue Sweater . Everybody was simply brilliant.

The next month shot by. Our days were packed with activity: We met the previous year’s fellows and listened to their experiences and advice, we got tips from TED speakers on how to get our stories across. In between, I grabbed every free moment I could to catch up on my reading for the next session. And then there were the probing sessions at the leadership workshop, kicking off with a grueling period of introspective silence that seemed like it would never end.

During our financial training, when we dealt with cash flows and balance sheets totaling millions of dollars, we went through a moral imagination exercise in which we were sent off with just five dollars and a subway ticket to experience the life of New York’s poor. In another exercise on human-centered design, we took to the subway in wheelchairs and blindfolds, trying to come up with feasible ideas for a public transportation system more accessible to handicapped people.

After just two weeks, we were all settled into our new environment and knew one another quite well. It was during the third week, just after the long periods of silent reflection at the leadership workshop, when one of the other fellows remarked to me: “The things you talk about often seem to hinge on the idea of strength and weakness.” It is certainly true that I have often wished for more strength and that I tend to think of weakness and lack of power as fearful things. I’m not talking only about physical strength. I mean other types of strength as well: economic and political power, knowledge, networks, emotional strength, kindness, and generosity.

I have always worked hard to make myself stronger and to overcome weaknesses and vulnerabilities. However, the Acumen training was centered on the idea that we should reveal ourselves to one another as we really are, weaknesses and all. It made me feel uncomfortable.

My fear of being vulnerable dates back to that impressionable period in early adolescence when I was an avid reader, reading whatever came to hand. Some of the books I read dealt with cruel themes: things like war and conflict, poverty, violence, injustice, and discrimination.

There were terrible descriptions of a baby being tossed into the air and impaled on a bayonet and of child victims of human trafficking. The revelation that there were still parts of the world where a girl my age could be stripped of her dignity and forced to suffer unbearable pain shocked me to my core. I could barely believe what I was reading.

Throughout human history, those who suffered were always women, children, and others in positions of weakness. For me, weakness was something to be feared and avoided at all costs. This idea was stamped on my consciousness from my early teens. A frightening encounter with a sexual pervert during puberty only reinforced the idea that as a girl I had been born on the side of the “weak.”

To overcome my fear, I took up martial arts. I got a black belt, gulping down protein drinks and building up muscles and eventually bringing home trophies and prizes from various tournaments.

Having grown up with values like these, there was no way I could expose my vulnerabilities in front people I had only just met—especially when they all had such glittering backgrounds. If anything, the idea made me feel more defensive than ever. I believed that I was well aware of my own weakness and was doing a decent job of dealing with them. It was because I knew my weaknesses so well that I worked hard to make up for them. I even had a number of “calculated weaknesses” that I didn’t mind letting people see in order to break down the distance between us. Wasn’t that enough?

I couldn’t accept the idea of telling others about my hidden inferior complexes: my cowardice, shallowness, inadequacies, selfishness, and lack of confidence. I worried that they would be disappointed if they found out, so I protected myself and tried to make sure that no one ever knew.

The other fellows often asked deep, probing questions, though. They were probably trying to get to know the real me. I should have been grateful. They were so sensitive and observant that they must have noticed there was more to me than I was letting on. Besides, we had plenty of time to deep dive into our inner selves. In the Acumen office we worked together, discussing issues until business closed, and in the Real World House we cooked together and sat up talking till late. Trying to articulate the subtle ins and outs of your inner self is difficult in any language. Having to do it in English, which wasn’t my mother tongue, made it even harder. It wasn’t easy to explain the different values and different ways of thinking that had been shaped by experience without touching on my vulnerability. I just smiled and hoped others wouldn’t see through me.

The effort exhausted my already tired brain, worn out after the Acumen training during the day. I would collapse into bed and fall asleep over my reading assignments and preparations for the next day. The next thing I knew, it was morning. And so it went on.

I suppose everyone has their own idea of what a leader is and what leadership entails. For me, a leader is someone who can unlock the potential in others and by so doing boost the performance and happiness of the whole group; someone who can correctly grasp the situation and make the best decisions based on the evidence; who can respect and bring together different positions and opinions, diverse philosophies, and values.

A leader is someone with the power to move things forward through inspiring speeches, someone with a rich knowledge and understanding of the world, who is trustworthy and in control, with an extensive network of contacts; someone who is attractive as a human being.

My “factors for an ideal leader” did not include any weak points. Therefore, my weaknesses, I felt, were exactly what I didn’t need. I worked much harder on building my financial, operational, and other hard skills than on opening myself up and exposing my vulnerabilities to others.

I felt vindicated in my approach when one of the facilitators remarked one day: “Ideas of leadership are just illusions. Leadership is about taking action.” When I look back on it now, I think the message we were meant to take from this was that it is important not to be trapped by fixed and traditional ideas of leadership; you need to make sure that the action you’re taking is really adaptive to the circumstances. But at the time I interpreted it to suit my own ideas: “Don’t waste time discussing concepts and ideas; it’s action that counts.”

If you want to change something, I thought, actions work better than words. And so I worked on building my strengths and conquering my weak points instead of talking about it. I recoiled from the idea of revealing the weaknesses I knew existed inside me, and tried to keep it hidden. It was only when we entered the second half of our training that my refusal to acknowledge my weaknesses started to cause me problems. 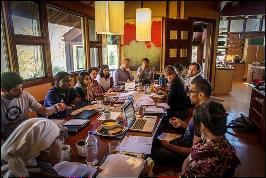