Japan since the Meiji Restoration (2): Mass Media and Democracy in Prewar and Postwar Japan

The articles in this series were compiled from contributions by members of the Political and Diplomatic Review project to the January 30, 2018, forum on “Japan since the Meiji Restoration,” held to reassess the 150 years since of the start of Japan’s modernization. In Part 2, Kazuo Komiya surveys the media’s role in advancing political agendas before and after World War II.

The first article of the five-article Charter Oath, promulgated on April 6, 1868, stated, “Deliberative assemblies shall be widely established and all matters decided by open discussion.” The Freedom and People’s Rights Movement of the 1880s took this pledge to heart as it pushed for reforms beyond anything the Meiji oligarchs envisioned. Spearheading the movement were two political parties, the Jiyuto (Liberal Party), and the Rikken Kaishinto (Constitutional Reform Party). Their call for constitutional government and the establishment of a national assembly received enthusiastic support from the Japanese press, particularly such newspapers as the Yokohama Mainichi Shimbun (Yokohama Daily News) and the Yubin Hochi Shimbun (Postal News), which were closely affiliated with the Kaishinto.

In 1889, the Meiji government enacted the Constitution of the Empire of Japan, drafted under the leadership of Hirobumi Ito. The Meiji Constitution, as it is known, assigned sovereign power to the emperor, but it also established the Imperial Diet, with an elected lower house, and gave that body the authority to approve all laws and the budget. It contained no specific provisions for the formation of a cabinet by a majority party, but neither did it rule out such a system.

To many, this seemed the most one could ask for in a constitution drafted and enacted by an “autocratic government.” Having achieved their core goals of a constitution and a national legislature, the Jiyuto, the Kaishinto, and the liberal press gave the Meiji Constitution passing marks as a flexible document that left room for the development of a party-based parliamentary democracy going forward. Following the establishment of the Diet in 1889, the press continued to play an important role in this process, in large part by providing support for the Jiyuto, Kaishinto, and other liberal parties.

However, the same newspapers that championed democracy and civil rights domestically tended toward a hardline nationalism on foreign-policy matters. They defined themselves as the defenders of the downtrodden Japanese people, and when the nation’s leaders and diplomatsーconfronted by the harsh realities of international power politicsーwere forced to yield to the will of foreign countries, the newspapers accused them of betraying the people. In this way, the media helped fuel a fierce popular backlash when Japan acceded to the Triple Intervention (1895) in the wake of the Sino-Japanese War and again when it failed to secure reparations from Russia in the Treaty of Portsmouth (1905) ending the Russo-Japanese War. Some of the key architects of Japan’s early constitutional government and party system, including Hirobumi Ito, Takashi Hara, and Kinmochi Saionji, were deeply critical of the Japanese press for its role in fostering a public mood of hardline nationalism.

That said, in the wake of World War I, the media contributed greatly to the development of prewar democracy. Setting its sights on the goals of universal manhood suffrage and alternation of power under a two-party system, the press successfully rallied public opinion to the cause. The 1925 revision of the House of Representatives Election Law extended the lower-house vote from male property holders meeting a certain tax-paying requirement to all males aged 25 and over. A coalition cabinet was established by political parties in 1924, and political party cabinets centered on one of the two major parties became customary from 1926. Beginning in 1927, control of the executive branch alternated between two parties, with the leader of the opposition party in the lower house securing the post of prime minister in case the ruling cabinet broke down. Of course, the flowering of prewar democracy can be seen as the culmination of ongoing efforts by a succession of liberal parties headed by such reformers as Shigenobu Okuma, but the media also played a vital role in setting and advancing the agenda through its reporting and editorializing.

In the late 1920s, having achieved their long-cherished aims of universal manhood suffrage and party government in a two-party system, the newspapers were somewhat at a loss to find equally compelling issues to attract and engage readers. However, the political parties soon filled the gap. Mass society was evolving rapidly in Japan, and under these circumstances, the opposition party could most easily unseat the party in power through attacks focusing on the hot-button issues of political corruption and weakness on foreign policy. Instead of providing perspective, the newspapers jumped on the bandwagon, and in so doing gradually undermined the party system they had helped create.

In the early 1930s, amid the stresses of the Showa Depression and the rise of anti-Japanese nationalism in China, elements in the Japanese military began taking matters into their own hands. When the Japanese Guandong Army launched a military campaign throughout Northeast China in the wake of the Mukden Incident of September 1931, the newspapers supported the army’s actions in a knee-jerk appeal to nationalist sentiment and hounded the second cabinet of Prime Minister Reijiro Wakatsuki (April-December 1931), which had promised the international community that it would restrain the army and contain the conflict.

In short, while the prewar news media succeeded in propelling the liberal democratic reforms that culminated in the late 1920s, it failed to provide a healthy corrective to nationalist sentiment owing to its shortsighted populist orientation. From 1931 on, public pressure for hardline policies mounted, making it increasingly difficult for Japan’s leaders, civilian and military alike, to find a diplomatic way out.

After Japan went down to defeat in World War II, it started over under the US-led Allied Occupation (1945-52). The Occupation authorities did not absolve the parties or the media of responsibility for the war, as evidenced by the number of journalists and politicians who were banned from public life during the purge.

Following the Occupation, the media, eager to redefine themselves as leaders of public opinion, emerged as staunch supporters of the postwar democratic order established under the 1947 pacifist Constitution. Together with public schools, they helped disseminate the democratic and pacifist principles of the Constitution and ensure their widespread acceptance. Indeed, the media probably deserve more credit in this regard than the political parties.

In the process, the mass media helped create a climate of public opinion that was extremely hostile to remilitarization and particularly to the amendment of the war-renouncing Constitution. The media also helped fan fierce public opposition to the 1960 revision and extension of the Japan-US Security Treaty under the cabinet of Prime Minister Nobusuke Kishi (1957-60). Although the revised treaty was ratified, the Kishi cabinet was forced to resign in the wake of mass protests.

While continuing to uphold the Japan-US Security Treaty and the Self-Defense Forces, which were by then a fait accompli, subsequent Liberal Democratic Party cabinets were extremely wary of provoking a public backlash by openly advocating a constitutional revision. Instead, the government adopted a loose interpretation of the Constitution that allowed Japan to maintain a military force and participate in a military alliance. In time, the media came to tolerate and support this flexible interpretation, much as it supported the Meiji Constitution as a flexible framework that allowed for the development of a parliamentary party system.

The media’s influence on postwar Japanese politics probably climaxed in the early and mid-1990s, with the passage of political and electoral reforms that were to change the nature of Japanese politics, beginning with the birth of an anti-LDP coalition government under Prime Minister Morihiro Hosokawa (August 1992-April 1994).

In terms of foreign policy, the national dailies and other news media adopted a dovish emphasis on restraint. This position undoubtedly created problems for the government after the Cold War, when Japan came under increasing pressure to contribute personnelーas opposed to just economic supportーto UN peacekeeping operations and other multilateral security efforts. From the 1990s on, the Japanese government struggled to gain the public’s approval for SDF participation in such operations.

Today the press is facing new challenges, as the forces of populism that have gained traction in the West in recent years attack the mainstream media as part of the entrenched political elite. Some scholars have argued that populism has an important supplementary role to play in a democracy, but I am dubious of such claims. It seems to me that the kind of narrow, nationalist, xenophobic populism that has reared its head of late threatens the very foundations of liberal democratic society, with its promise of tolerance and equality for people of all races, religions, and backgrounds.

In the past, the media played a leadership role in the development of Japanese democracy, but it has also failed the nation by cleaving too closely to popular sentiment. Now, more than ever, the free press must avoid the perils of populist pandering and fulfill its responsibility as one of the key pillars of democracy. 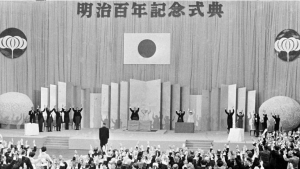 Japan Since the Meiji Restoration (6): Reconjuring the Vision of the Meiji Centenni...