The Populist Surge and the Vanishing Political “Middlemen”

The political intermediaries that had once been the main links between established parties and their constituencies are fast becoming obsolete, says political historian Jiro Mizushima, enabling populist candidates to appeal directly to the growing ranks of unaffiliated voters.

Mirroring the marked rise in populist candidates and parties around the world since about the second decade of this century has been the corresponding decline of more established parties. For much of the postwar era, politics in many democracies had been dominated by two major moderate parties, usually one leaning to the right of center, and the other to the left. But today, support for such parties is steadily falling.

The Decline of Established Parties

In the first round of the 2017 French presidential election, neither candidate from the traditional center-right and center-left parties (the Republicans and Socialists) advanced to the runoff—an unprecedented outcome in the history of the Fifth Republic. And in the 2018 German parliamentary elections, the vote shares of the Union parties (Christian Democratic Union and Christian Socialist Union) and the Social Democratic Party—the country’s two leading political groups that had produced all postwar chancellors—saw their vote shares plummet to historical lows.

Even more precarious have been the fortunes of the two mainstays of Dutch politics; the Christian Democratic Appeal and the Labor Party, which together obtained roughly 70% of the votes in the 1980s, managed to muster just 18% in the March 2017 general election—a historic low. Although pundits projected a comeback in the March 2021 election, the combined total for the two parties further eroded to 15%. Labor, which had claimed the office of prime minister for 20 postwar years, tumbled to the ranks of medium-sized parties with only 5.7%, a mere shadow of its former self.

Although a democratic hallmark for many years, a political system built around two established centrist parties may quickly be turning into a thing of the past.

What are some of the factors responsible? The end of the Cold War, for one, has muddied the left-right ideological divide, and globalization (including European integration) has engendered a new set of contentious political issues. Here, however, I would like to focus on the precipitous decline of intermediary groups that, in the previous century, had played a key role in organizing the rank and file in support of major political parties. The swelling of the ranks of unaffiliated voters has shaken the political and social foundations on which established political groups had stood, enabling populist forces to boost their political clout by bypassing the “middlemen” and communicating directly to the electorate.

During the past century, most large parties in Western industrial democracies built up a broad network of affiliated groups with whom they maintained a mutually supportive relationship. Conservative parties like the Christian Democrats developed close ties with farm groups, small business associations, religious organizations, and informal circles of honoratioren (prominent citizens), which provided human resources and support at election time. Their progressive counterparts had their own groups of constituents, notably labor unions, cooperatives, welfare societies, youth leagues, and women’s groups, from which many party members were recruited. More importantly, a significant share of the voting public belonged to one or another of these groups and generally supported the candidates and parties endorsed by their organizations. These bodies fulfilled a role akin to the “political socialization” of the citizenry.

Needless to say, politicians looking to bolster their electoral chances were eager to engage with these groups. In The People vs. Democracy: Why Our Freedom Is in Danger and How to Save It, Johns Hopkins Associate Professor Yascha Mounk notes that politicians of the past developed close relationships with churches, trade unions, and other community organizations and that they shared the ideals and traditions of those groups. The core support group for conservative politicians was the church, while progressive candidates turned to labor for help with elections.

Such groups have a greatly diminished presence today. The share of people identifying with a specific religious denomination has declined with the secularization of society, and the once-powerful voice of organized labor has been muffled by falling unionization rates. As lifestyles change and political orientations diversify, people are no longer drawn to joining a political group or party and sacrificing one’s time toward a common goal with likeminded colleagues.

The ongoing estrangement from established parties and organizations has increased the number of independents and unaffiliated voters, who view the political establishment as representing not their own views but those of powerful vested interests. From the candidates’ perspective, this means they can no longer count on organizational endorsements to deliver votes and election victories.

The situation in Japan is quite similar to that in Europe. The table below shows the membership rates in various intermediary organizations in 1989 and 2018. In 1989, 67.8% of Japanese voters belonged to residents’ associations, 13.8% to women’s associations and youth groups, and 9.4% to labor unions; only 16.9% had no affiliation. These figures show a high rate of membership in various community groups and other organizations.

Many members of neighborhood associations, civic youth groups, agricultural organizations, and chambers of commerce ran as conservative candidates in local assembly elections, and they, in turn, formed the core base of support for Liberal Democratic Party politicians in the National Diet. Labor unions, meanwhile, had similarly close ties with various centrist-to-progressive parties, such as the former Japan Socialist Party, the former Democratic Socialist Party, and the Japanese Communist Party.

Needless to say, these networks played an active, supporting role in national elections. But just as in Europe, they have become much less of a factor in recent years. By 2018, the membership rates had dropped to 24.8% for residents’ associations, 3.5% for women’s associations and youth groups, and 6.0% for labor unions. Plagued by the dwindling and aging of members, these groups can no longer deliver votes as they once did for the established parties.

The three decades between 1989 and 2018, which roughly correspond to the Heisei era in Japan, were, on the surface, not particularly tumultuous. Evidently, though, a “quiet revolution” was under progress, largely undetected, resulting in dramatic changes in the role of intermediary organizations in society.

By contrast, the share of voters not affiliated with any organization saw a huge surge. Over the same 30-year span, this bloc expanded from 16.9% to 44.3% to become the biggest group. Its share has been rising steadily over the years, and it is only a matter of time before it claims a majority of the electorate.

The unorganized voter is independent of community- or workplace-based groupings and has little interest in the endorsements candidates receive from such bodies. He or she feels no affinity with established parties and is likely to base his or her voting choices (including to abstain) on the information available in the media and online sites. “Political socialization” through intermediary groups has become a thing of the past. Voters today seek a more direct form of political participation.

Therein lies the appeal of populist candidates, whose criticism of the establishment strikes a chord with the unaffiliated. Given the burgeoning size of this bloc of voters, political newcomers can most effectively win elections not by pandering to various lobbies but by criticizing them as entrenched elites and vested interests that had long monopolized political power. This would appear to be a much better strategy in the current political climate than laboriously building a network of support groups.

There has recently been a surge of populist leaders at the local level in Japan, especially in major metropolitan areas where long-established intermediary groups and political parties have had a relatively low presence. The governors of Tokyo and Osaka, as well as the mayors of Osaka and Nagoya, swept into office by galvanizing unaffiliated voters with antiestablishment rhetoric. Tokyo Governor Yuriko Koike, for example, announced her candidacy in 2016 against the wishes of the powerbrokers in the LDP to which she belonged, formed a new party, and won the hearts of Tokyo residents with attacks on the influential leader of the Tokyo Metropolitan Assembly and promises of a cleaner brand of politics, unfettered by vested interests.

Koike’s victory is typical of a growing pattern of populist candidates and parties taking their message directly to the people through social media and bypassing the “middlemen” that had played such an important political role in earlier generations. The more radical the message, it seems, the stronger the appeal for their “followers.” The tide of populism sweeping the globe is no doubt a direct consequence of the diminished role of the church, trade unions, and other such intermediary groups.

This article is based on a paper presented at the March 11, 2021, meeting of the Comparative History of Populism project, held at the Tokyo Foundation for Policy Research. It has been augmented to reflect subsequent developments. 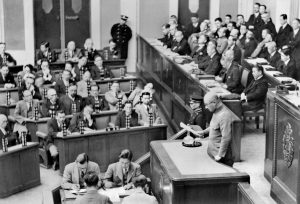