[Eyes of the Wise] Rebuilding the Liberal International Order

This article is based on the speech presented at the sixth symposium: Diplomatic Strategy in the Age of Globalization on May 9, 2008.

A significant debate is going on at the same time as the campaign for the forthcoming US presidential election unfolds, a debate that addresses globalization, the transformation of the international system, and the US position in the coming years. Historically, the United States has played a powerful role, but today it occupies a troubled position in the international system. The war in Iraq and the development of a campaign called the "War on Terrorism" have unsettled the balance of world politics and, in the process, made the United States more controversial. Energy insecurity has increased, global interdependence has increased, and governance mechanisms to manage economic crises have failed to materialize accordingly. In addition, the multinational, multilateral global institutions are not functioning as efficiently as before, while the resurgence of old economic powers, such as China and Russia, has led to ambiguity over how to cope with the return of great power politics. Henry Kissinger, one of the leading American strategists, has remarked that he has never before seen the world in such a state of flux with so few agreed-upon rules and norms to guide the flow of change. Indeed, we are witnessing a breakdown of the old order. The basic global governance system is up for grabs, and it is uncertain what the new world order will look like.

Crisis in the American-led Order

In my view, we are witnessing a crisis of the American-led postwar international order, a crisis where the United States must decide if it will continue to provide public goods and support effectively functioning institutions or if it will assume a less constructive, more nationalistic role even as its influential position is in decline. This American crisis is further compounded by a crisis in the "liberal international order," which has produced three questions: Can the world be rebuilt around a common rule of law or will it be broken into pieces and alternative subglobal regions? Can this liberal international order accommodate rising economic powers, particularly in Asia, such as China, India, and other emerging states? And are these rules and mechanisms capable of adapting to and solving new problems, such as global warming, health pandemics, nuclear weapons proliferation, and so on?

Pessimists anticipate the return of great power politics and spheres of influence, with superpowers like China and Russia forming a coalition of autocratic capitalist states and using their power and resources to resist integration into the global system, resulting in the creation of a "new divide." This is in contrast to the "old divide" of the free world and Communism. Not necessarily foreseeing a clash between autocratic and liberal states, other pessimists predict that the rise of China and India will lead to a clash between East and West, a struggle over control of the world system. This will in effect be an East-West clash in which the West is unable to relinquish authority and provide prestige to the rising Asian states.

I don't subscribe to either school of thought. I am an optimist, and we optimists argue with realists like Henry Kissinger that there is a possibility of a one-world system of cooperation. The liberal order can survive, we believe, but it must be rebuilt. This will require renewed bargains and reformed institutions, which I view as the only option short of a rediscovery of the old logic of an open liberal system. Speaking provocatively, I don't think that the Chinese have a secret idea for how they will use their newly acquired power. Ultimately, I think, they will find a way to accommodate themselves to the existing order. In addition, there are incentives for the United States to accommodate itself in a rule-based order.

A remarkably successful order, the Old World Order has been around for 50 or 60 years, underpinned by open markets, multilateral institutions, democratic solidarity, cooperative security, and US hegemonic leadership. The order flourished because of complex international bargains whereby the United States was an exporter of security and importer of goods. If defined in terms of wealth creation and physical security, this may arguably be the most successful order in world history. This order provided the basis for the swift reintegration of Japan and Germany; it created a foundation for the liberalization of the world economy; and it balanced American power with the aspirations of other states.

But this order is in crisis for several reasons. The end of the Cold War has meant the absence of a single, common enemy, which in the past provided a basis for international cooperation. Threats have shifted, and there is growing disagreement on the definition of the enemy. Great institutions like the United Nations, the World Bank, and the International Monetary Fund have been in a progressive state of decline, and many institutions are facing an identity crisis and are in dire need of reform. The final aspect of the crisis is the transformation of notions of sovereignty. Historically, we had a system of sovereign states that was recognized and ensured by institutions like the United Nations, making it one of the most widely accepted norms of world history. But over the last 50 years there has been a transformation in the idea of sovereignty. The Universal Declaration on Human Rights celebrates a global, not just a national, standard for human rights, thereby setting a new stage for global actors to intervene inside of states. A new and revolutionary term, "the responsibility to protect," implies the right for international players to intervene in situations where the state has failed to adequately protect its people. As such, we find ourselves at a difficult crossroad where the old order is eroding but the new order is not yet clearly defined.

From an American perspective, I would recommend that the new US president conduct a world tour to reaffirm the importance of alliances. Alliances are more than security partnerships; they serve as an architecture that allows Europe, America, and Asia to maintain and nurture political and business relationships with each other. Alliances provide mechanisms for intergovernmental communication, routines of cooperation and coordination—not just on the military side but on the strategic and political side, as well.

Secondly, measures to address global warming and the promotion of a low-carbon society must receive top priority. Global warming is going to be one of the greatest national security threats of the twenty-first century. Nearly 70 percent of the population of Asia is coastal and at risk from rising sea levels. There will be winners and losers in the battle against climate change, and the losers will predominantly be poor countries in the tropical zones and small island nations, which could lead to mass movements of people and increased regional conflict.

Thirdly, we must reaffirm commitments under the Nuclear Nonproliferation Treaty. The NPT is the second most universal treaty in the world today, after the United Nations Charter. The nuclear states must agree to move toward abolition, reduce their stockpiles, and move toward nontesting. In return, those states that are nonnuclear powers will be given access to civilian atomic energy and an international fuel cycle. Inevitably there will be challenges of safeguarding technologies that, in the wrong hands, could pose a threat to the entire global community.

Finally, my thoughts on China. The world is anxiously watching and debating about the shape and form of China's future role in the international community as an undisputable economic power. What kind of world power will China be? How will it influence America's position in the world? Will we witness a new Cold War? I believe that China can be a valuable citizen of the world. Toward this end, the single most important thing from an American perspective will be to rebuild the global institutions that China will confront. A coalition of capitalist democracies, such as the Organization for Economic Cooperation and Development, will make China realize that it cannot rival the capitalist democracies, whether in terms of defense expenditures or other requisites, and in this regard, we will be able to overcome the crisis of liberal internationalism. 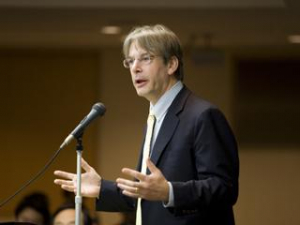