As Japan’s debt-to-GDP ratio approaches 250%, policymakers must carefully examine the potential fallout of fiscal insolvency and prepare a contingency plan, Keiichiro Kobayashi cautions, rather than turning their eyes from the unthinkable.

Japan’s public debt continues to swell in spite of a robust real economy. That said, the chances of fiscal insolvency within a decade are slim, as long as market confidence in the Japanese economy remains strong. But without a serious effort to enforce fiscal discipline, there will inevitably come a time when debts become unsustainable. This is not an imminent threat, to be sure, and I do not mean to sound alarmist, but we should keep in mind that a fiscal emergency a generation or two from now is far from unthinkable.

Contemplating the consequences of a worst-case scenario may be scary, but scarier still is to shut the topic out of policy discussion. There is an unhealthy inclination in Japan among many large organizations to refuse to consider post-failure responses for systems deemed “infallible.”

But as long as systems are created by humans, nothing is completely fail-proof, and attempts to rehabilitate public finances could easily hit a snag. Policymakers and other experts must therefore carefully examine the potential fallout of a government bankruptcy and prepare a contingency plan—much like in preparing for a major earthquake or nuclear accident—pooling the expertise of various ministries to minimize damage for citizens.

Perhaps the most conspicuous example of the proclivity to turn one’s eyes from the unthinkable was Japan’s failure to prepare for the worst during World War II. Blind faith in the infallibility of the armed forces precluded any planning for an outcome other than outright victory. Such jumbled “logic” continues to inform the policies of many organizations today.

Figure 1 shows the debt-to-GDP ratios of the Group of Seven countries. What sets Japan apart from the other G7 countries is not just the much higher level of public debt but also the fact that the share has continued to grow at an alarming rate, now nearing 250%. This is higher even than in the immediate wake of World War II. In fact, at no time in history has public-sector debt in an industrial country ever exceeded 200% of GDP during peacetime.

Figure 1. Public-Sector Gross Debt of G7 Countries as a Percentage of GDP 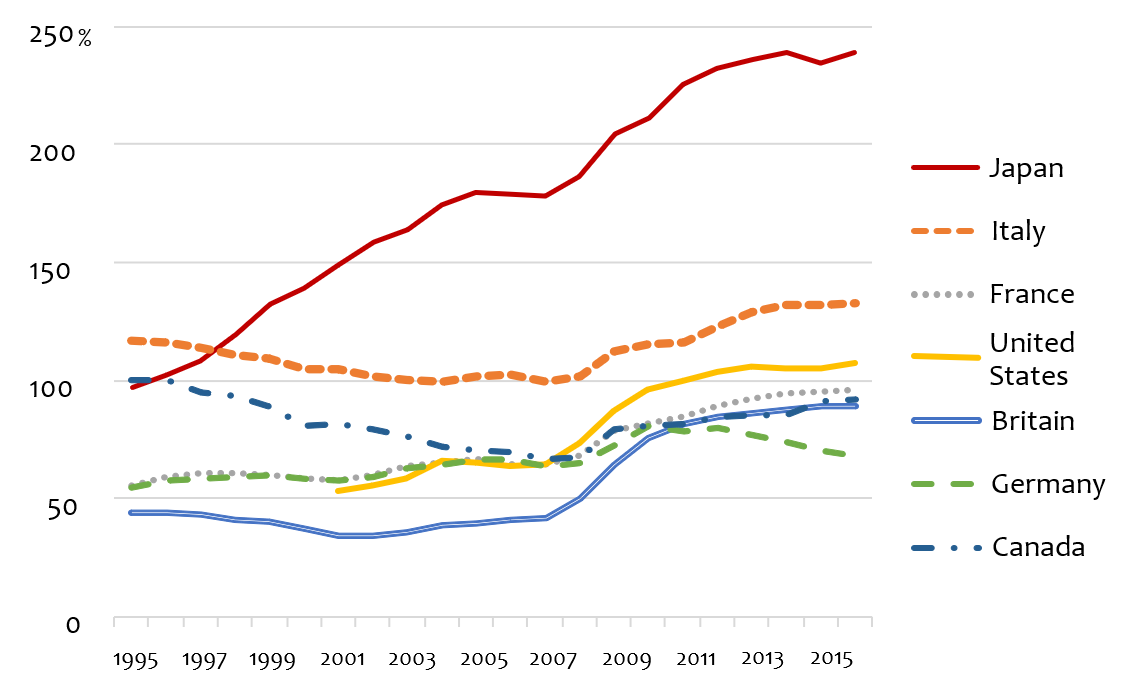 The chart above plots each country’s gross debt. To be sure, Japan’s debt is significantly lower in net terms (gross debt minus government-held assets)—at around 150%—but this is still the worst among the G7 countries and abnormally high for an industrially advanced country in peacetime. And there is no escaping the fact that Japan has continued to fall deeper into arrears—including in net terms.

Where will the accumulation of debt lead? Figure 2 is a long-term estimate of Japan’s debt-to-GDP ratio (central and local government debt outstanding). The ratio is expected to remain steady through around 2020 owing to low interest rates, but if steps are not taken to alleviate spiraling social security costs or to raise taxes, interest payments on existing debt will eventually snowball (dotted line), exceeding the unrealistic level of 450%. 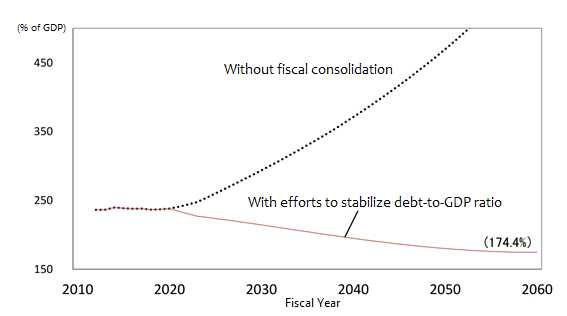 What Will Insolvency Entail?

A rising debt-to-GDP ratio will not derail the Japanese economy as long as investors (mainly domestic financial institutions) continue to purchase government bonds. The reason they keep buying these bonds is because they believe the government will eventually pay them back. Economists point to the 1,800 trillion yen in financial assets held by the private sector to allay fears of an immediate fiscal meltdown in Japan. But such reassurances are premised on the government introducing new taxes, as necessary to avoid a default, and redeeming its obligations. Market confidence in Japanese treasuries, in other words, is predicated on there being a major tax hike at some future date.

But there is no guarantee that the government will actually take such a step, and confidence in Japanese government bonds could tumble at any time. Once confidence is lost, investors will begin placing their money elsewhere, and the country—without the means of financing its debt—could default.

To prevent this, the government would need to either raise bond yields (that is, lower the value of its bonds) or ask the Bank of Japan to expand its bond purchases. The former is not a realistic option, though, as higher bond yields will spark an upward spiral in interest rates throughout the economy, dampening consumption and capital spending and touching off a severe recession.

The remaining option is to ask the BOJ to make outright, unrestricted purchases of government bonds. Creditors will then be able to divest their holdings and receive Bank of Japan notes (including current deposits) in return. Such an arrangement may be feasible as long as investors are happy holding the nation’s currency, but if the BOJ begins buying more than it can spend, it would need to be bailed out by the government. With no one left to purchase government bonds, though, bond rating would collapse, and so would confidence in the central bank.

Loss of market confidence in government bonds will trigger a crash in the yen’s value, as investors rush to sell off yen-denominated assets. This will result in hyperinflation, with prices jumping two- or even threefold.

In an inflationary economy, people will opt to purchase real estate, precious metals, shares, foreign currencies, and other assets that are resistant to inflation, rather than hold on to cash. They may also channel their savings abroad, thus sparking capital flight. The wealth gap is likely to widen, as pensioners and others without financial assets will see the value of their deposits plummet, while large landowners and others with non-cash assets could reap windfall profits.

A high rate of inflation will drive down the value of the yen in currency markets and push up the cost of imports, leading to higher drug, food, and energy prices. In many cases, this will mean a decline in the quality of life.

The government would then need to take drastic and immediate action to enforce fiscal discipline and win back market confidence. Creditors are not likely to be convinced, though, unless the consumption tax is raised far beyond levels normally considered politically feasible. Stringent austerity measures would also need to be introduced that will hit the low-income bracket the hardest. In a worst-case scenario, healthcare and pension cutbacks could result in the loss of human lives.

To prevent such a tragedy, it is important that the government perform triage by establishing clear spending-cut priorities beforehand. Efforts toward creating a fiscal contingency plan, though, have made little headway owing to the government’s reluctance to consider risks for systems that are supposedly “infallible.”

Some economists, meanwhile, continue to insist that Japan’s fiscal fears are overblown. They point out, for example, that more than 90% Japanese government bonds are in the hands of domestic creditors. This, they argue, is like the wife lending money to the husband. But per capita public debt has already mushroomed to approximately 10 million yen; in other words, the government owes each Japanese citizen 10 million yen, which it will be unable to repay without a huge tax hike or painful spending cuts. The “husband” has used up what he has borrowed from his “wife” and has no means of paying her back. For domestic creditors to continue purchasing bonds is tantamount to acquiescing to a write-off of all previous debt, since repayment must be financed with 10 million yen in new taxes for each and every citizen.

There is an equally dubious argument that fiscal collapse can be avoided if the BOJ continues to purchase deficit-covering bonds. As I have explained above, market confidence in the central bank rests on the creditworthiness of the central government. Should bond ratings tumble, so will confidence in the BOJ and the national currency, thereby inviting hyperinflation.

A seemingly more persuasive argument is that austerity measures, if implemented too quickly or rigidly, could debilitate already weak growth, dashing any hope of restoring fiscal health on the strength of an expansion. But it can also be argued that the reason for lackluster growth is anxiety about the future due to lax fiscal discipline, prompting households and companies alike to save for the future, rather than spend or invest now. This could trigger a prolonged slump well before a major fiscal crisis, as I have demonstrated using a theoretical model developed with Waseda University Professor Kozo Ueda.

There is no denying that higher taxes and spending cuts can dampen economic growth. Political leaders are thus wont to use “shock absorbers”—that is, stimulus spending—to buttress economic activity and prevent a rough landing. But unless we are willing to put up with a certain amount of pain, we will never break the vicious cycle of fiscal anxieties inhibiting growth, weak growth depressing tax revenues, and low revenues aggravating the fiscal malaise. There is no magic wand that will painlessly restore fiscal health and induce robust growth at the same time.

The Consent of Future Generations

There is no shortage of prescriptions for rebuilding Japan’s finances-—raising the consumption tax to 25%, for example, or asking the elderly to shoulder a bigger share of their healthcare bills—but none of them will be pain-free. Achieving fiscal soundness, in that sense, is not simply a matter of reducing debt levels but involves deeper, philosophical questions about how much pain we are willing to take on now and how much of our excesses we leave to be dealt with by future generations. If, as John Rawls posits in A Theory of Justice, people enter into a social contract in their “original state”—that is, behind a veil of ignorance—then they would no doubt acquiesce to a political institution that speaks for the interests of future generation, since they would realize the unfairness of being saddled at birth with massive debts incurred by previous generations. What Japan needs today may be a new approach to democracy founded on a fully refurbished social contract.