Japanese cigarette prices rose again this October, with a pack of Mevius, Japan Tobacco’s flagship brand, jumping from ¥540 to ¥580. The increase reflects the latest in a series of hikes in Japan’s tobacco excise taxes. Continued increases appear inevitable and are doubtless justified by both public health and fiscal considerations. But they should also be part of an integrated program to discourage smoking and provide support for cessation, especially among those most vulnerable to the impact of price increases.

Demand for tobacco has fallen sharply in Japan in the past three decades, along with the number of smokers. The adult smoking rate (male and female combined) has plunged from above 35% in the second half of the 1980s to below 18% today, and the number of cigarettes sold annually fell from 348.3 billion in 1996 to 98.8 billion in 2020. When heated tobacco products are added in, the latest sales figures are somewhat higher—about 140 billion—but still some 60% below the historical peak. Underlying this downturn is a public climate increasingly hostile to smoking, as seen in the growing number of local governments imposing smoking bans and restrictions to protect the public from secondhand smoke.

There are still pockets of political resistance to higher cigarette taxes and tighter restrictions on smoking, as represented in the National Diet by the Alliance of LDP Smokers (Liberal Democratic Party) and the cross-party Mokumokukai. But their influence appears to have weakened. Since the mid-1980s, the number of domestic tobacco farmers has plummeted from about 80,000 to roughly 4,000. The drop in retailers is less dramatic, but Japan’s once-ubiquitous neighborhood tobacco shops have dwindled as well, with convenience stores taking over the bulk of retail activity. As a result, the number of stakeholders with a vested interest in the industry has declined to the point where political pressure is no longer as influential as before.

Amid this seemingly inexorable decline in smoking and cigarette sales, the relative stability of cigarette tax revenues over the years is striking. Since 1985, when JT took over the industry from Japan Tobacco and Salt Public Corporation (a state monopoly), the combined revenue from national and local excise taxes has rarely fallen below ¥2 trillion.

This has fueled the notion that the makers of Japanese tax policy are bound and determined to raise the cigarette tax as much as it takes to maintain ¥2 trillion in annual revenue. Is it possible to verify this theory?

The first question to ask is whether the timing of cigarette tax increases is in fact linked to declines in tax revenue. The graph below charts changes in the national and local excise tax rate against trends in total cigarette tax revenue since 1985. Scanning the graph as a whole, it is difficult to say. But the trend over recent years is highly suggestive of such a link. As restrictions on smoking in public places have tightened, cigarette sales have dropped, causing tax revenue to dip as well. In 2017, revenue dropped down to the ¥2 trillion mark, and the government adopted a plan to raise cigarette taxes by ¥3 a cigarette over a period of four years, from 2018 and 2022.

Cigarette Sales, Tax Revenue, and the Timing of Tax Increases 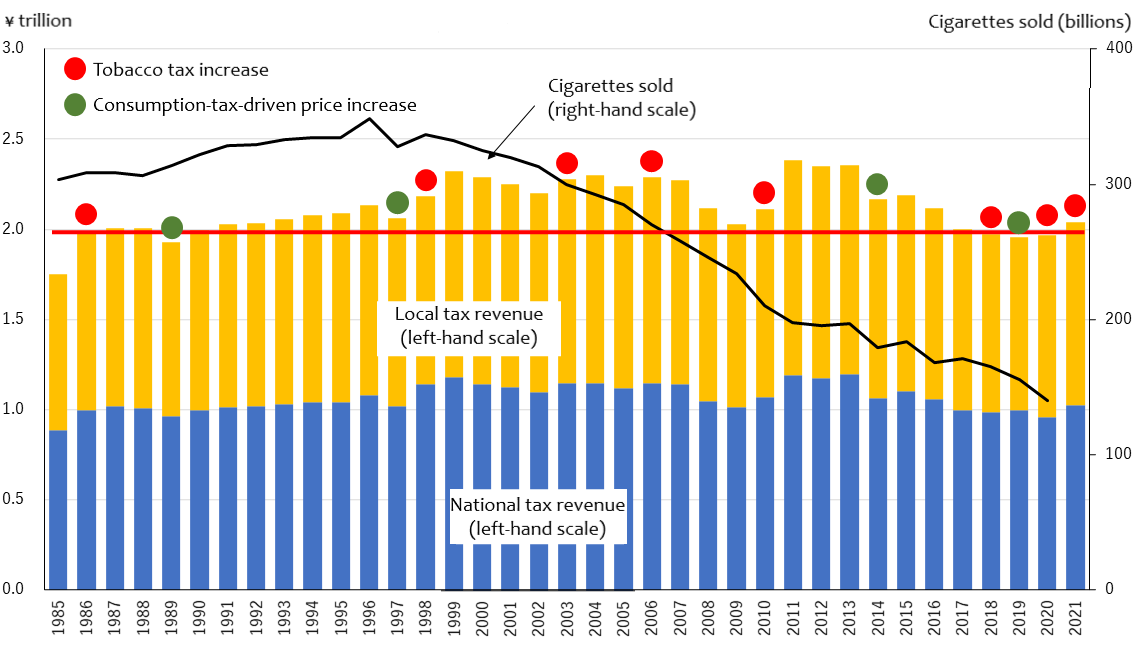 My university colleagues and I have used statistical methods to get a better handle on the mechanism driving cigarette tax increases. Putting ourselves in the position of a bureaucrat in charge of cigarette taxes, we predicted sales volume on the basis of current data and recent trends and used that prediction to forecast cigarette tax revenues assuming no tax increase. We set up a model describing a situation in which any drop in the revenue forecast below a certain value, ¥X trillion, triggers a hike in cigarette taxes. By testing various values, we were able to identify (using coefficient of determination, likelihood, and so forth) the value that yielded outcomes (with respect to the binary variable of tax hike/no tax hike) most closely fitting the actual pattern of tax increases in the past.

The outcome varied subtly depending on the model’s exact specifications; for example, the decision to raise taxes might hinge on the margin by which the forecast falls short of ¥X trillion as opposed simply to the existence of any anticipated shortfall. However, in virtually every case, we found that the optimal X value was 2. From these results, it seems fairly clear that ¥2 trillion is the minimum target for cigarette tax revenue.

It is also possible to track how closely the extra revenue anticipated from a given tax hike matches the estimated shortfall (relative to the ¥2 trillion target). In individual cases it sometimes runs a bit over or comes up a little short, but on average, the forecasted shortfalls are neatly offset by the estimated added revenue. The pros at the Tax Agency really do know their business.

In short, it appears that tobacco excise taxes and the price of cigarettes have been adeptly adjusted to maintain at least ¥2 trillion in annual tax revenue from cigarette sales. Of course, this is not to say that successive tax chiefs have been following an explicit policy to that effect. But given that the annual proceeds from cigarette taxes have hovered at or slightly above ¥2 trillion for more than 30 years, it seems fair to deduce that the authorities have been under considerable psychological pressure to maintain that level of tax revenue.

The next question is, where does this all lead? Thus far, tobacco excise taxes have been a reliable and steady source of tax revenue, and Japan’s tax authorities would doubtless like to keep it that way—all the more so given the fiscal challenges of financing social security costs in our rapidly aging society. To be sure, a 1% hike in the consumption tax would more than cover that ¥2 trillion, but each increase in the consumption tax comes at a high political cost. With this in mind, newly installed Prime Minister Fumio Kishida has said he intends to leave the consumption tax rate unchanged for the time being. Under the circumstances, the tax authorities have every reason to hang onto the roughly ¥2 trillion generated annually from cigarette sales.

This raises some thorny issues, however. For one thing, it is well known that the annual societal costs attributable to smoking—in terms of health impacts, lost productivity, healthcare expenditures, and so forth—far exceed ¥2 trillion. Given the societal costs (negative externalities) of cigarette smoking, it is hard to justify dependence on the tobacco industry as a means of financing government expenditures. However, societal costs are not really the concern of the tax authorities. Their focus is on the revenues flowing into government coffers.

Another issue is that the decline in smoking is expected to accelerate, and as demand plummets, further tax increases will be needed to secure that ¥2 trillion. Ultimately, taxes and cigarette prices could spiral upward as demand spirals downward. Some will doubtless say that this is all for the best, if it means that smoking and its societal costs will continue to decline. Unfortunately, the issue is a little more complicated.

Multiple empirical studies have shown that smoking is more prevalent and entrenched among populations that are socioeconomically disadvantaged with respect to such factors as education, income, and employment. That means that the economic impact of high cigarette taxes falls disproportionately on those who can least afford it. This is why there is more to sensible tobacco tax policy than simply raising the price of cigarettes on the grounds that smoking is bad for you.

To be clear, Japan’s cigarette taxes are likely to increase henceforth, and in principle such increases are to be welcomed. However, it is incumbent on us to help cushion any negative societal impacts as best we can. The way to do this is to wean people from cigarettes by other means.

In addition to public information campaigns, there is a need for tighter restrictions and prohibitions on smoking in public places and more effective measures to deny minors access to cigarettes. The 2018 revision of the Health Promotion Act made it the responsibility of Japan’s national and local governments to ban or restrict smoking in public facilities and prevent exposure to secondhand smoke. The authorities should take this mandate more seriously.

But we also need to provide more support and encouragement to smokers who want to kick the habit. Outpatient cessation programs—which are already covered by health insurance—should be more widely available. Companies could contribute by offering special perks to employees who quit smoking. Research in behavioral economics may yield hints as to the most effective ways to help people quit.